Trekking Mount Rinjani When It Erupted!

Yes no joke, we really witnessed Mount Rinjani erupting during the trek! It was one of the most amazing happenings ever in our lives! I’ll also be dropping useful tips along the way as well, so read on especially if you’re planning on trekking Mount Rinjani!

The trek started off pretty easy, almost flat ground and clear trail. As you can see from the photo below, it was quite foggy and cold actually! But because we were constantly on the move, we didn’t feel that cold yet. 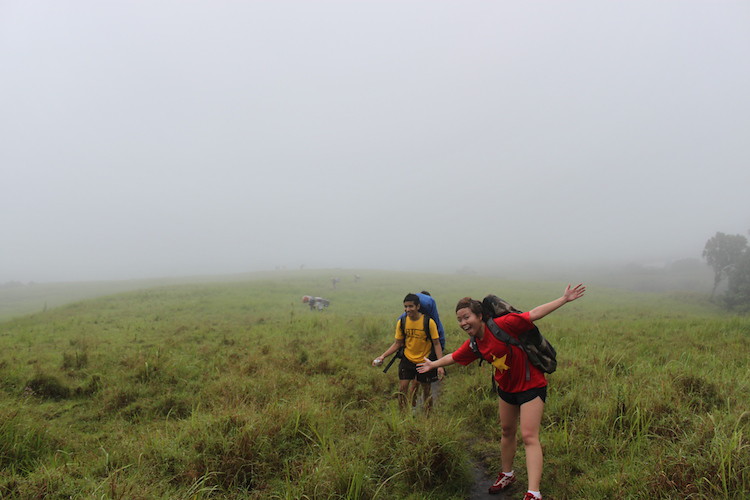 Lunch break! Sweet hot tea is damn shiok in such a cold weather! 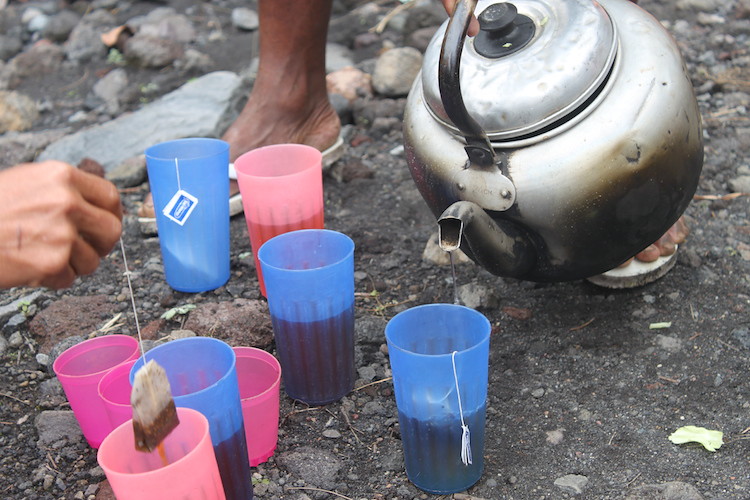 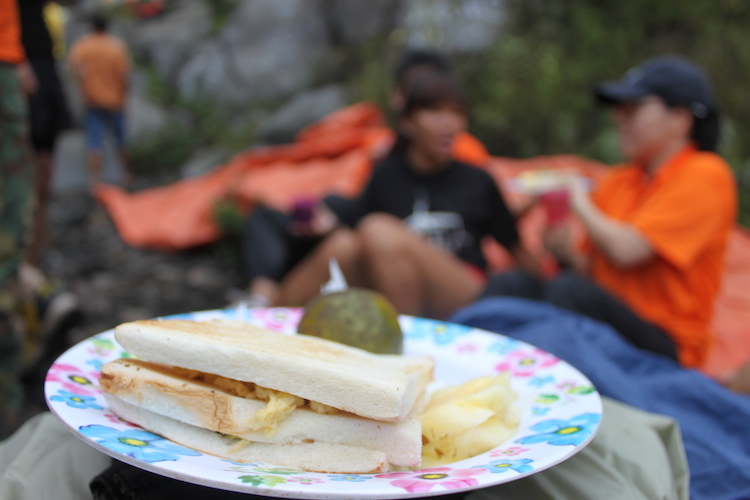 And then it slowly got colder as the day progresses. Towards the mid afternoon, it started drizzling!

Useful tip: Remember to bring a good waterproof windbreaker! Useful in fending of the cold wind as well as the rain! 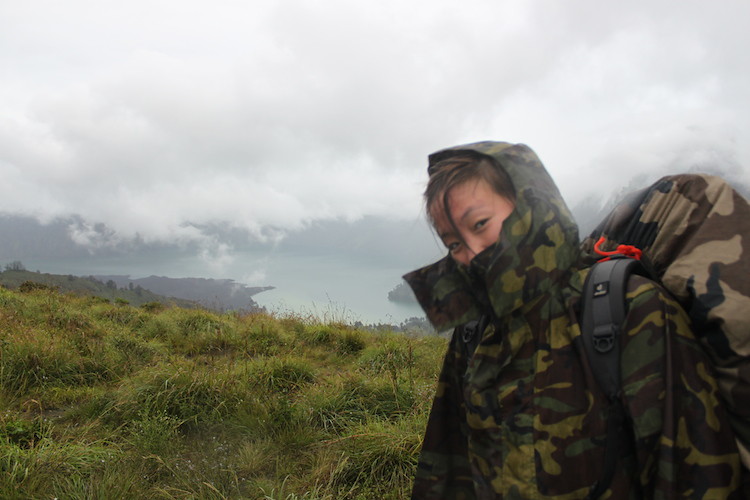 Finally after almost 8 hours of arduous climb, we reached our base camp! We travelled with porters and they helped carry our tents and food. So by the time we arrived at our base camp, the tents were already set up and dinner was almost ready! Look at how foggy it was! 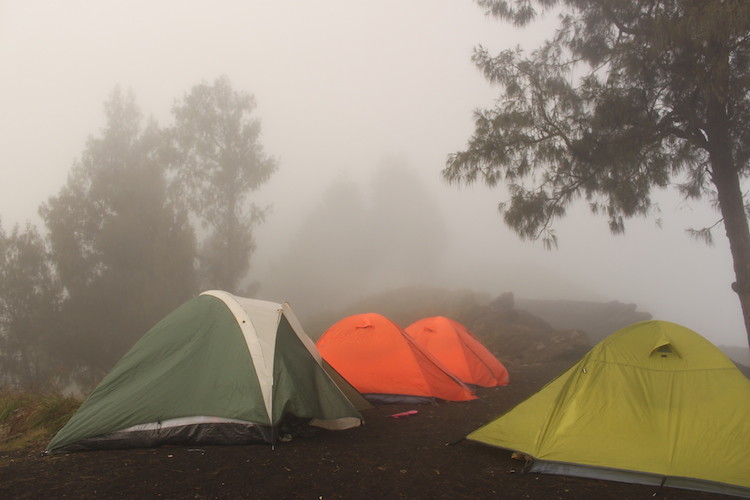 But thankfully the fog cleared for awhile and we could take a nice shot with the crater of Mount Rinjani. No this is not the summit, unfortunately. The weather got really bad at night and when we were supposed to wake up at 3am for the summit climb, it was practically a thunderstorm! The wind was howling and the rain was crazy!  It was almost impossible to hike up the summit in that weather! Plus i heard from others that the summit climb was actually really challenging. Our leader later informed us that the summit climb has to be cancelled 🙁 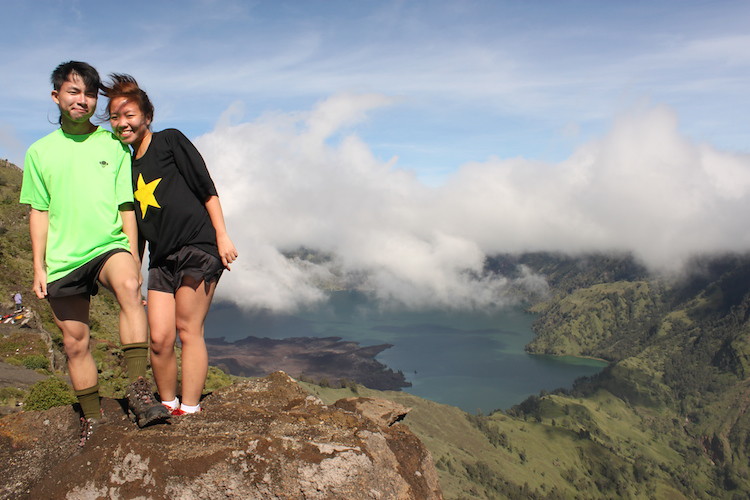 We made our way down to the crater lake the next day. I remembered it to be quite challenging actually as the terrain was mostly volcanic ash and sand and it was really slippery! Half the time i felt like i was skiing on sand.

Useful tip: Remember to apply lots of sunblock! When descending, the sun will be directly shining at you and it’s a killer! 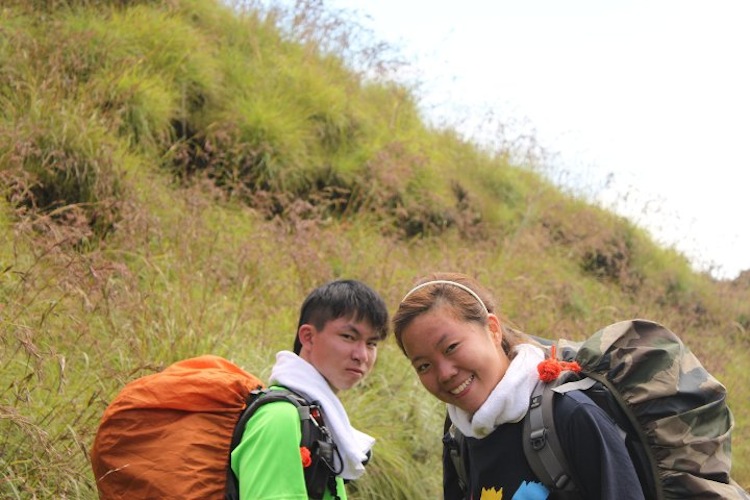 Finally we reached the crater lake where our tents have again already been pitched for us! This is really such a privilege that i appreciate so much! Imagine having to pitch your own tent when you’re already so exhausted and just wanna rest! But that’s what Daniel and me usually have to do like for example when we were doing the cycling expedition in New Zealand.

Some of us jumped into the crater lake for a dip! The water was freezzzinnggg cooold! But also very shiok as throughout the 4 days trek, you won’t get to shower! Hence this was the closest that we could get to a shower. 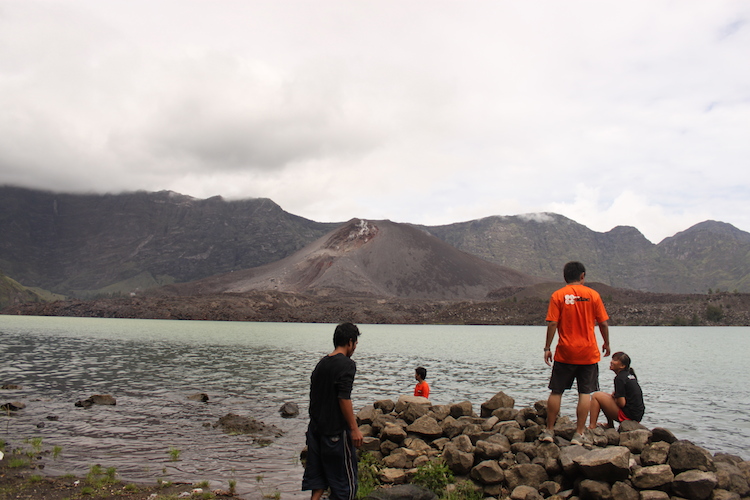 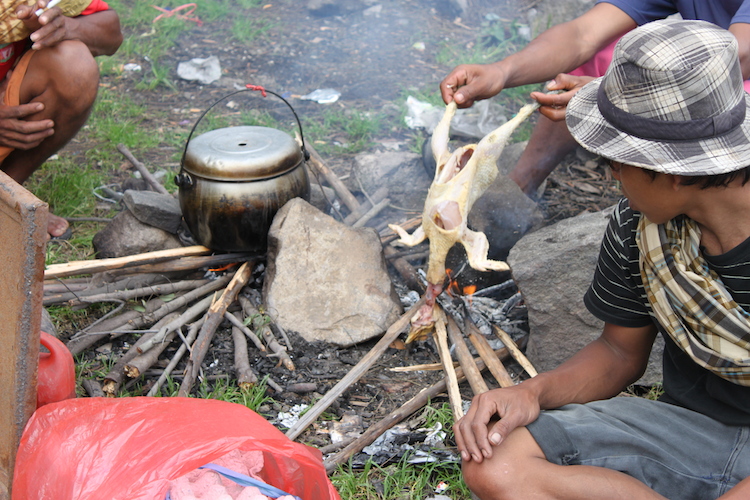 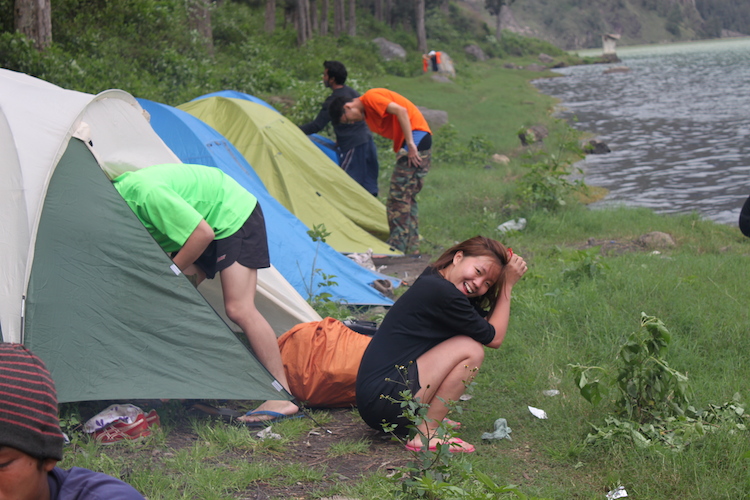 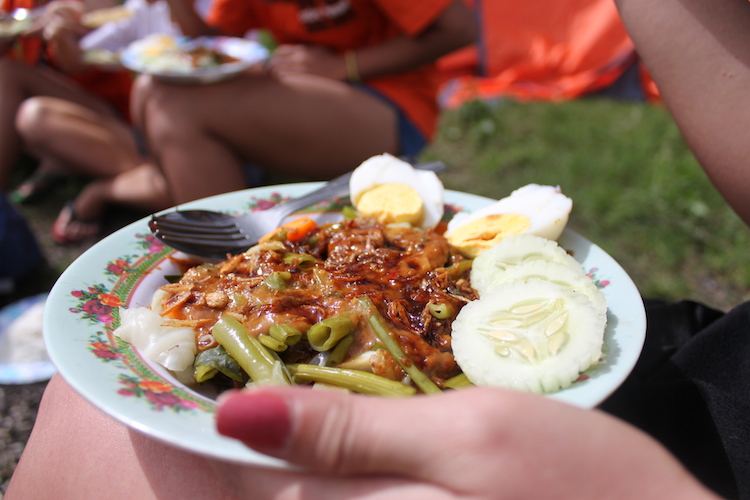 We also did a short detour to a natural hot spring. The smell of sulphur was so pungent! 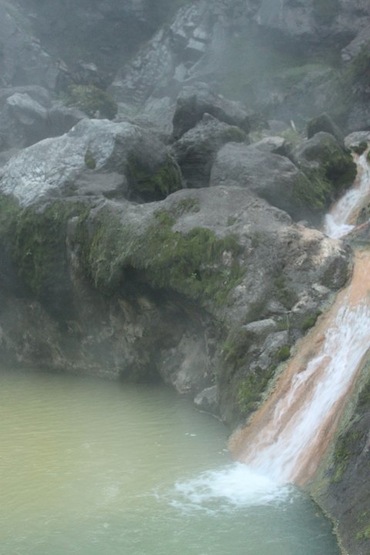 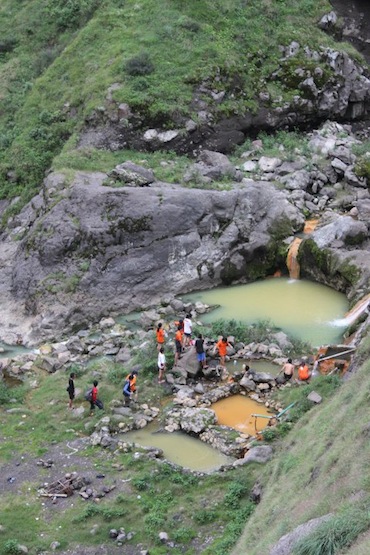 And our guide also brought us to this small cave which had nothing much inside. It was a very small opening into the cave though, we literally had to leopard crawl in. 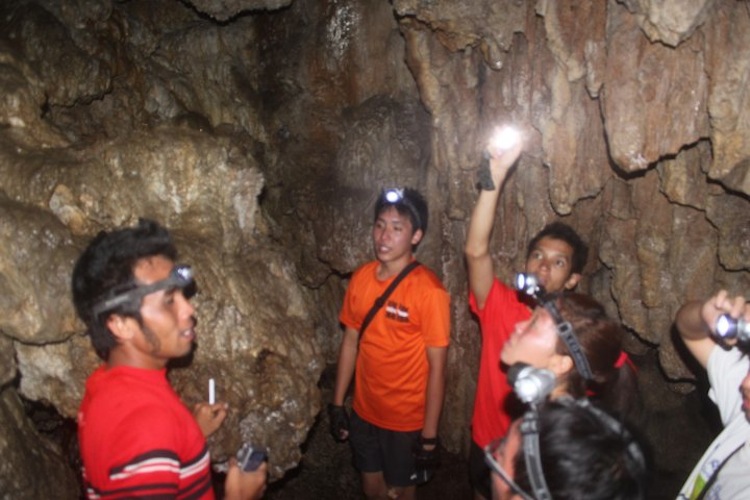 And that very same night when we were sleeping in our cozy tent, we heard a super loud rumble! We immediately got out of our tent to check out what happened! This was what we saw! As it all happened too quickly, Daniel wasn’t able to adjust his camera mode properly and hence this was the best shot that we got of the lava erupting out of the volcano! It was pitch dark outside and all we could see was the bright red lava that stood out among the black sky! It was sooo amazing as we stood there in awe…still not believing what we just saw. 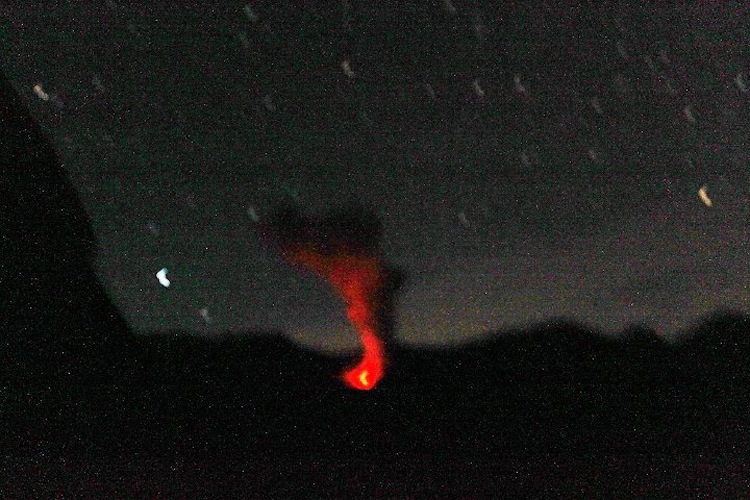 But that amazement lasted us only for that night. The next day, the volcano continued to erupt multiple times till we became oblivious to  it. Look at us just packing our stuff as though nothing has happened when in the background, the volcano was still erupting! 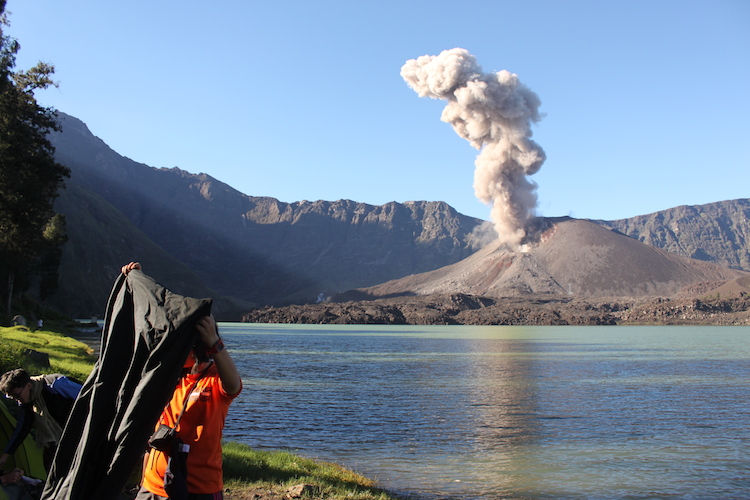 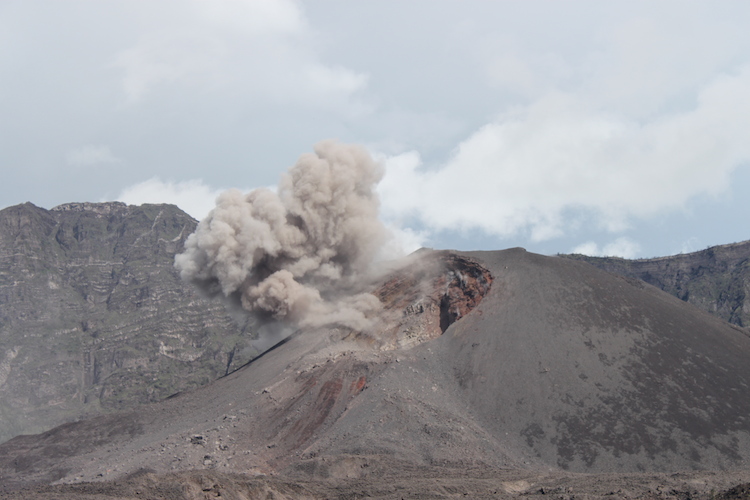 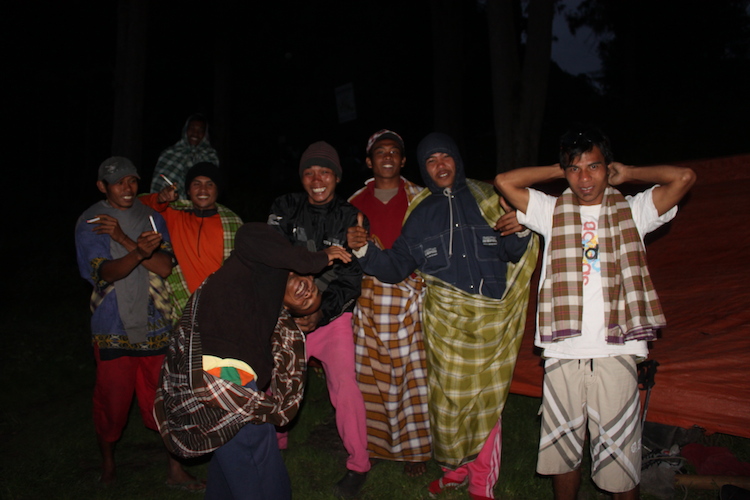 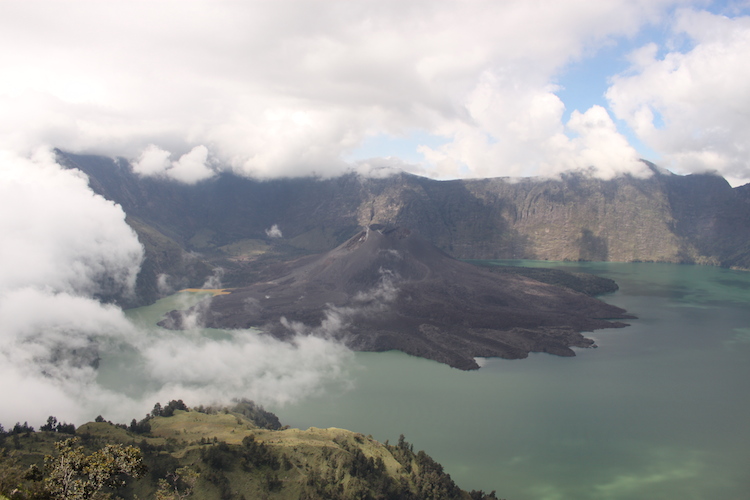 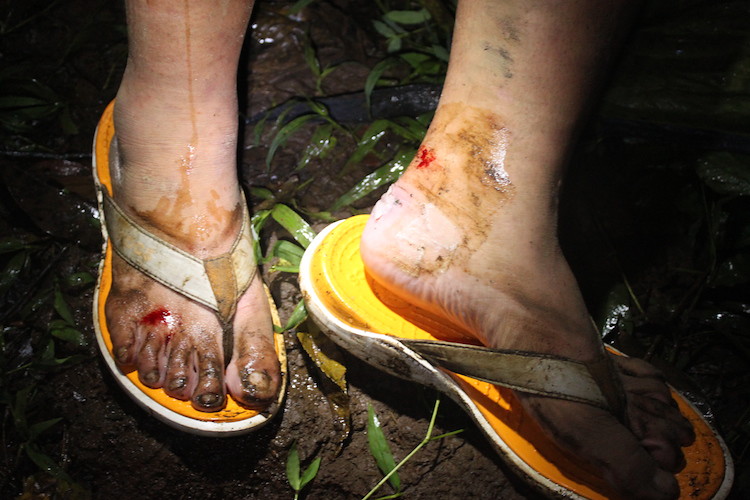 Ooh and lastly beware of leech bites! That happened to our friend…very gross right? Thankfully i didn’t get bitten by any leech though!

Useful tip: To get rid of a leech, try not to use the usual methods like burning or adding salt to it as it can result in the leech regurgitating into the wound and causing infection much worse than the leech bite itself!  You should instead use fingernails or any sharp object to push along the suction between the skin and leech to slowly break the suction of the leech. Once the suction is broken, the leech will detach its jaws. Alternatively, you can just let the leech complete its meal on your blood until it satisfied its appetite, and the leech will detach itself and fall off automatically.

Overall this was a really tiring but fun trek! Though at that point of time i was telling myself, no more of such torturous stuff! Once in a lifetime is enough! But after you return, the sense of satisfaction is so great that it’s enough to make me want to put myself through such torture again! Read about our experience on climbing Mount Kinabalu!

Do share below in the comments if you’ve had such a similar experience before too! Any other recommended places for us to trek next?

« Diving in Bali with Giant Fishes! » The Must-Have Item For All Female Travellers

Diving in Bali with Giant Fishes!

Our experience on diving in Bali with Tulamben Wreck Divers! Where we saw huge giant bumphead parrot fishes and cute...