Here’s a recount of our experience climbing Mount Kinabalu’s Via Ferrata route! Our team being spontaneous and fearless, we decided to take on the challenge of descending Mount K summit’s Via Ferrata – Low Peak Circuit route without much thought put into it. We didn’t really know what we signed up for actually, we just agreed and paid for the package. And only realising what we’ve committed to like 1-2 weeks before the actual climb. We were all freaked out, or at least i was!

“Basically the via ferrata route is a  protected mountain pathway consisting of a series of rungs, rails, cables and bridges embracing the rock face. It allows access to scenic sections of the mountains that are typically available only to rock climbers and mountaineers.Designed for the brave and active with above-average fitness levels, this 4 – 6 hour route with an optional summit attempt includes rest stops at scenic locations.”

**It’s deeply saddening to receive the news about the recent incident that struck Mt K. If you wish to contribute to the families of the mountain guides that passed on during this incident, please donate directly at www.ilovesabah.com. This is a fund raising initiative by Amazing Borneo, one of the tour agencies that organises treks to Mt k. All proceeds will go directly to the families of the victims.  The via ferrata has been now rebuilt with an exciting new route! The tips and experiences we have below still applies! 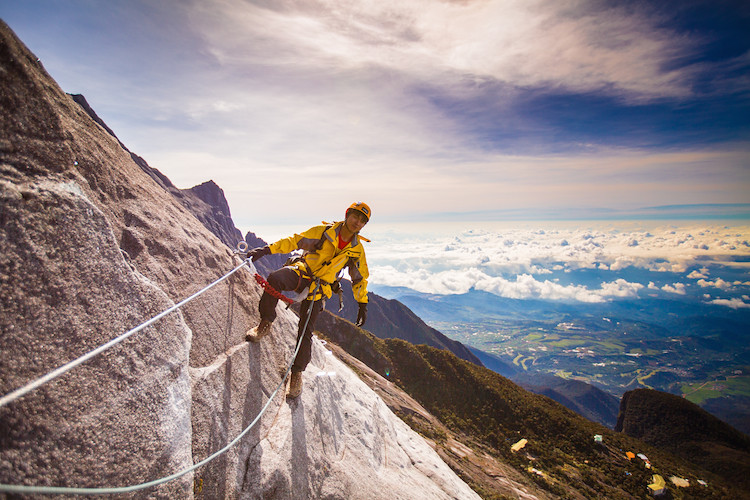 When you reach Pendant Hut (base camp for Mt K), there will be a compulsory briefing at 3pm for all trekkers who will be doing the ferrata route. During this briefing, the trainer will teach you how to put on your harness as well as what you’ll have to do during the ferrata route itself. 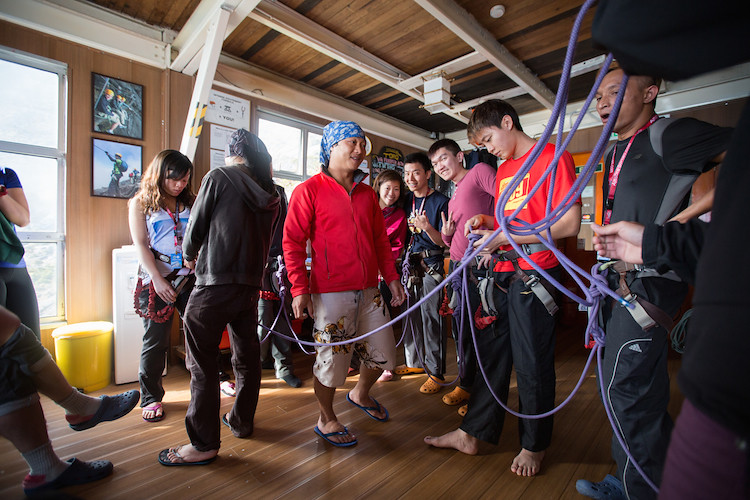 One key point to take note of for the ferrata is that, you MUST  reach the starting point of the ferrata by 7.30am. I’ve heard that they’re really really very strict and even if you’re 1 minute late, they will not allow you to do the ferrata. With that in mind, we literally raced down the summit! We were afraid that we will be late for it. In the end we were 30 minutes early -.-

So anyway, here’s us, all getting ready to start on the ferrata! As you can see, i was really quite scared. Tip: don’t forget to apply sunblock all over your face and body! I was wearing my windbreaker initially, but eventually it got so hot and i removed it. The sun was directly shining on us against the cliff face that we were climbing. I could feel my skin getting burnt! And i forgot to apply sunblock on my arms 🙁 Resulting in ugly tan lines! 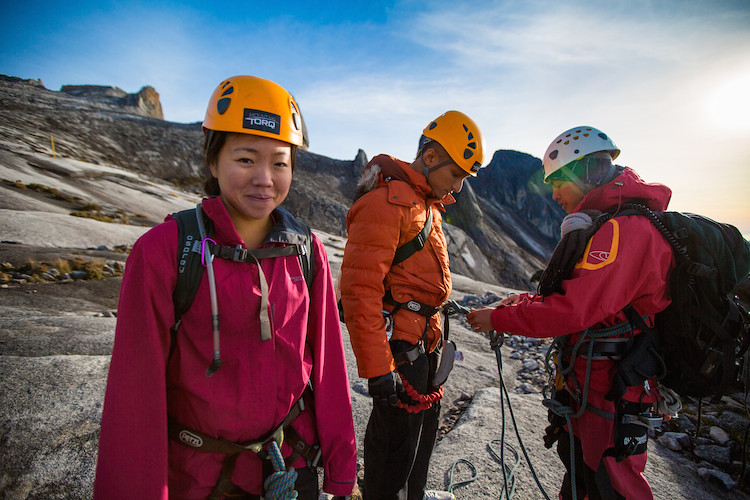 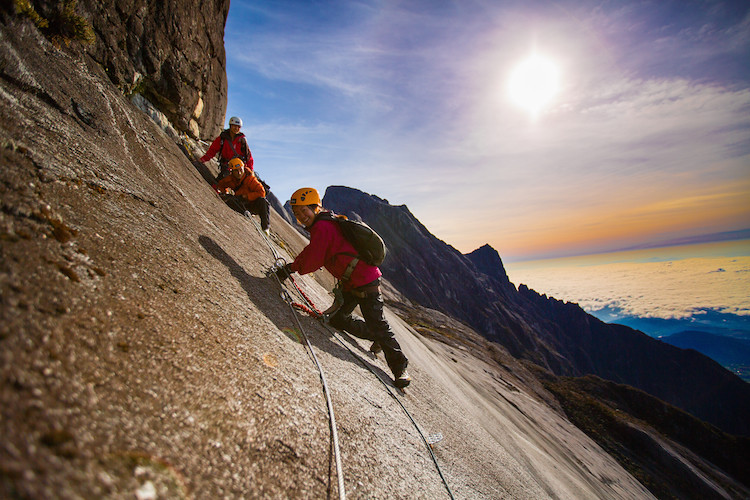 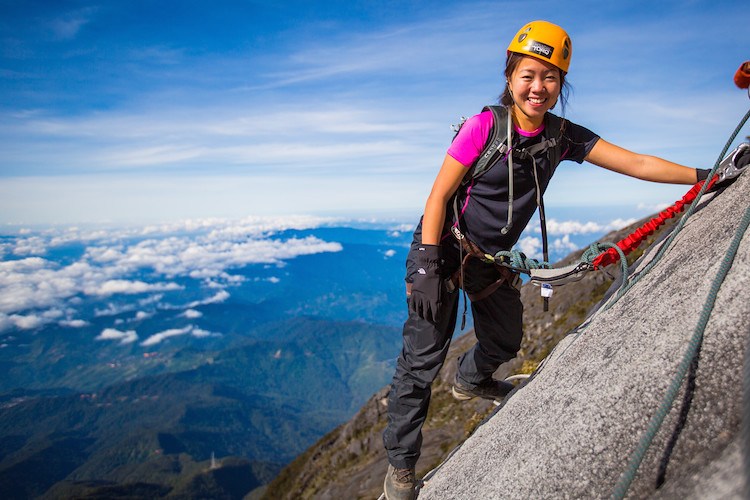 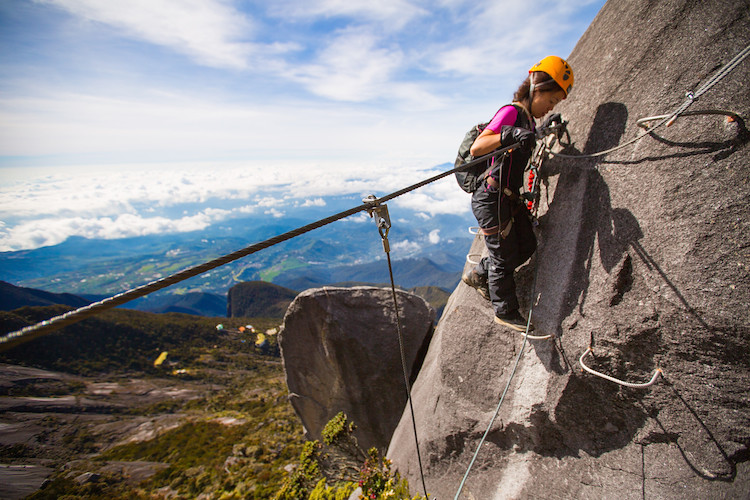 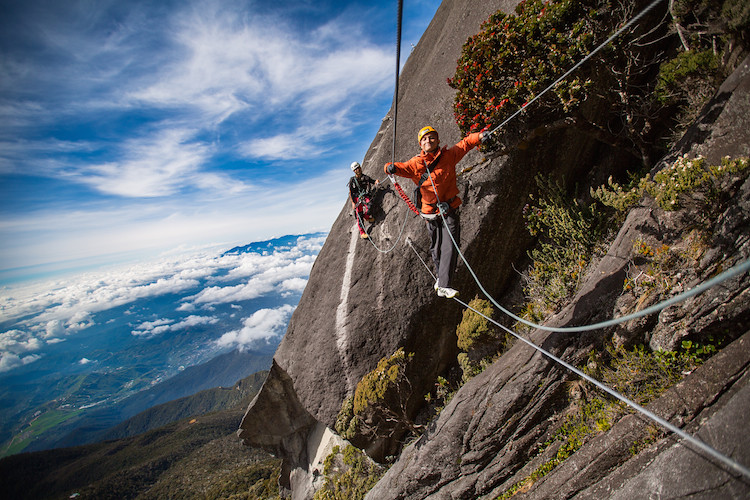 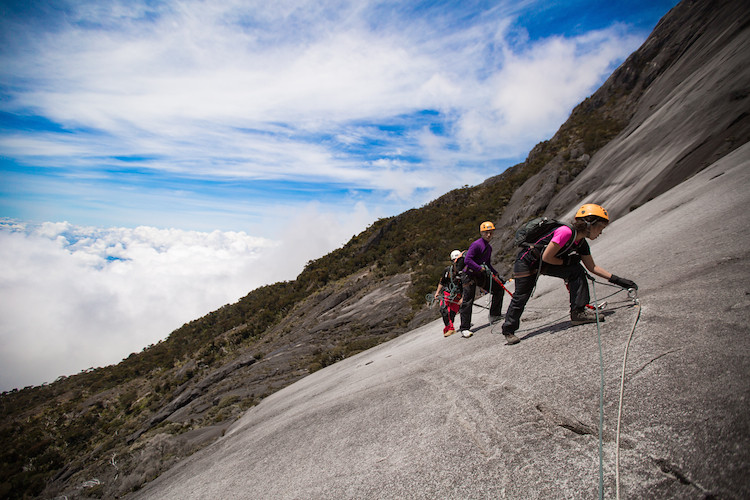 There are basically 2 types of ferrata routes that you can choose from.

This is a shorter and simpler version of the ferrata and can be completed leisurely within 2-3 hours. Length of route is only 430m. You’ll still get a taste of the ferrata and get to try out a few obstacles such as the  2 cable Monkey bridge,  Tyrolean traverse &  Balancing beam (you’ll get to do all these in the low’s peak circuit too!)

This is the more challenging and tougher route. Total distance is 1.2km! Almost 3 times longer than the “Walk the Torque” route. You’ll need an estimated 4-6 hours to complete this. The low peak circuit will eventually connect to the walk the torque and hence you won’t miss out on anything.

Our take on the ferrata:

I personally feel that if you just want to get a taste of the ferrata, the Walk the Torque route is good enough. For the low’s peak circuit, the obstacles are repeated and each obstacle is extended for quite a long time. After awhile it gets repetitive and a little boring actually. To add on, the bright and unrelenting sun spared no mercy on us, zapping away whatever little energy that we’ve left! Not to mention, by the time you’ve summited Mount kk, you would already have been super exhausted. If you’re doing the Low Peak Circuit, you’ll still need to expend an additional 4-6 hours of energy to complete it. And we’ve not even taken into account the remaining amount of time and energy needed to descend the mountain. For us, we started our summit climb at 2.30am, and only finished everything only at 5.30pm (including the ferrata as well as descending to the bottom of the mountain). That’s 15 hours of almost non-stop climb. No joke. we could barely feel our legs after that.

By the way, for those of you who still can’t imagine what the via Ferrata is all about, watch the Mount Kinabalu Via Ferrata video that my friend did! (Warning: not for the weak hearted or those with a fear of heights!)

How to book the ferrata:

We booked our package with Amazing Borneo. You may check out the different packages that they have on their website. We decided on the 3D2N Mount Kinabalu Climb With Ferrata & Highland Resort Star (Low’s Peak Circuit).

How much does it cost?

For Malaysians, it costs RM1560 for the package as stated above and for foreigners, it costs RM1660. That works out to an average of $650/pax using the exchange rate of $1:RM2.5.

What to wear/bring for the ferrata:

1. Gloves with good grip would be very useful. You’ll need to grip on to the ropes quite often and gloves would be useful in preventing rope burns.

2. A light windbreaker would be good in shielding you from the scorching sun and at the same time from the occasional cold breeze.

3. Trek shoes with good grip. Very important as you’ll need the shoes to grip onto the rock surface to prevent you from slipping down.

4. Wear a comfortable set of light weight clothings. Preferably long pants as it’s likely for your knee to graze against the rock surface while doing the ferrata.

4. Avoid accessories such as caps, sunglasses or any other thing that might fall off easily. You have enough things to worry about already when doing the ferrata and you wouldn’t want any more distraction.

5. Of course, remember to wear plenty of sunblock.

6. Bring at least 1 litre of water. The low’s peak circuit will take at least 4-6 hours to complete and you’ll need enough water to last you through the entire ferrata climb. There’s no water point during the ferrata.

That said, this was definitely one memorable experience for all of us, both mentally and physically. The view from above the clouds was simply breathtaking and those times are moments that i will always cherish. Read here for our full experience on climbing Mount Kinabalu!

5 Things You Must Bring to Climb Mount Kinabalu

Don't miss out on these top 5 items that you must bring to climb Mount Kinabalu! Also, check out our...