7 Reasons Why You’ll Definitely Fall In Love With Kuching

Kuching, a natural tropical playground on its doorstep. For all nature and wildlife lovers, it will be a challenge to not fall in love with this amazing city.

1. You get to experience nature at its best in Bako National Park 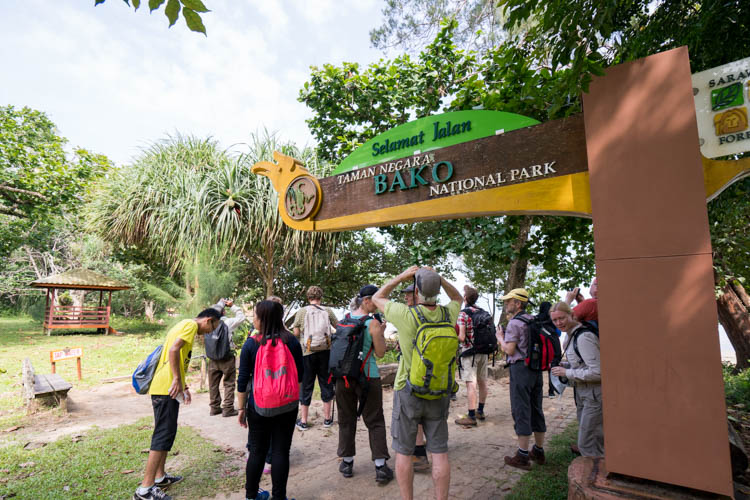 At the entrance of Bako National Park! Can you guess what the tourists were looking at?

Being one of the oldest national park in Sarawak, this place is full of wildlife wonders and a great place for avid trekkers. This park is also home to more than 250 rare species of the proboscis monkeys which can only be found in Borneo.

There are 18 routes in total ranging from a 30mins walk to an 8 hour trek. Due to time constraint, we did the Telok Paku trail which was only around 1 hour (one way) to the end. The terrain was quite challenging as you will have to cross over protruding overgrown roots and to clamber over undulating rocks and tree branches. 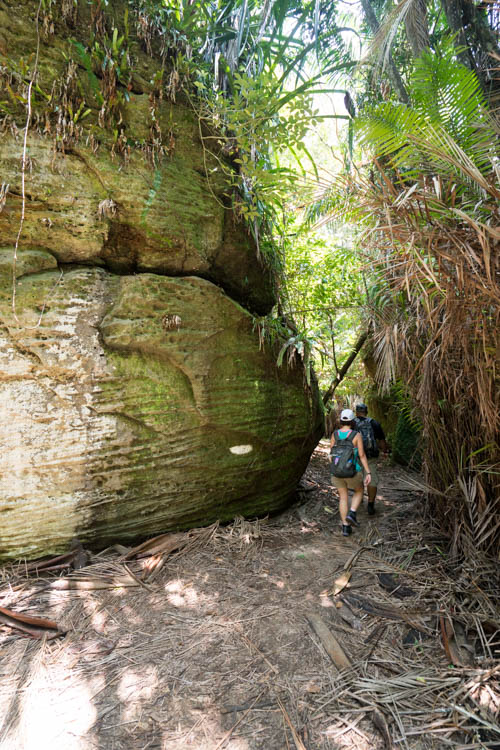 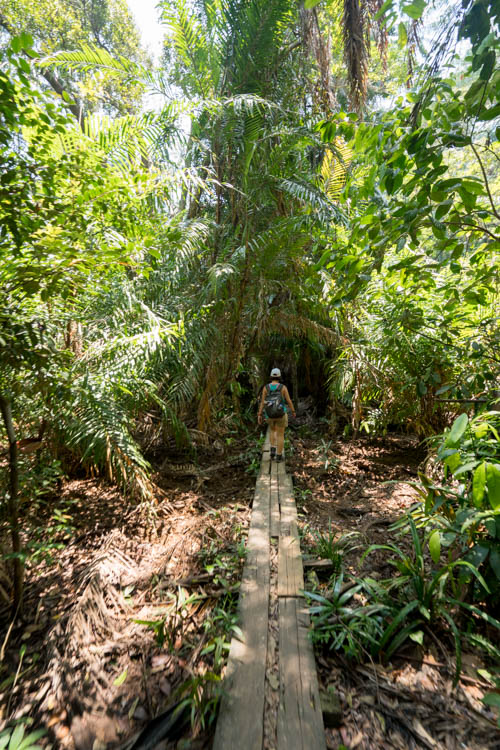 For the geology lovers, you will appreciate the sea stack that has been formed over years of erosion. Known as the “Serpent Rock“, you can get a close up view of it via a boat ride from the beach at the end of the Telok Paku Trail. 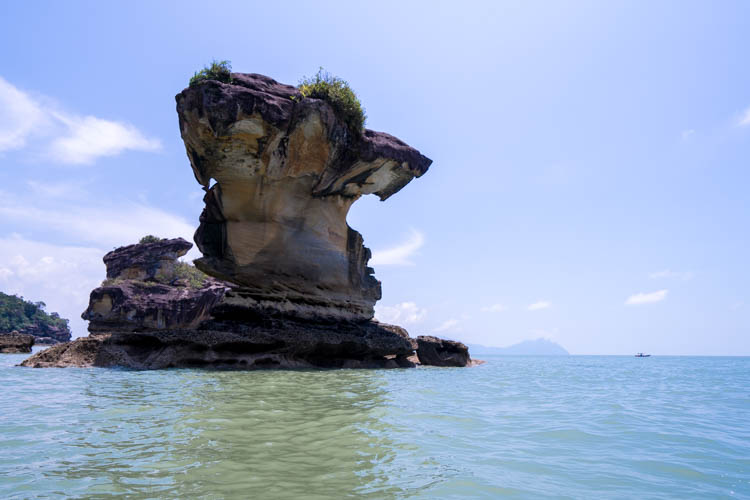 It takes about an hour drive from Kuching City to Bako National Park. There is also accommodation available at the park if you’re keen on staying overnight.

2. You get a chance to spot the Rafflesia Flower at Gunang Gading National Park

The Rafflesia flower is one of the rarest flowers in the world and it can be sighted at Gunung Gading National Park! A fully bloomed Rafflesia can grow up to 1 metre in diametre which is huge! Unfortunately it’s really difficult to see them as they take up to 9 months to blossom from a bud to a fully bloomed flower and have a life span of only 6-7 days!

We only managed to see a 3 month old bud when we were there. The bud is extremely delicate as it’s food to a lot of animals and most don’t survive till a full bloom 🙁 Also, apparently a fully bloomed Rafflesia gives off a smelly rotten meat smell, but we haven’t had the chance to smell that yet. 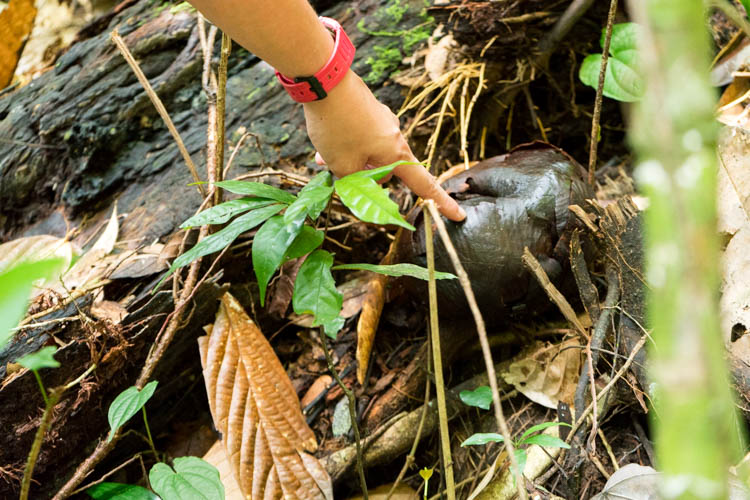 Can you spot the big black bud of the Rafflesia? 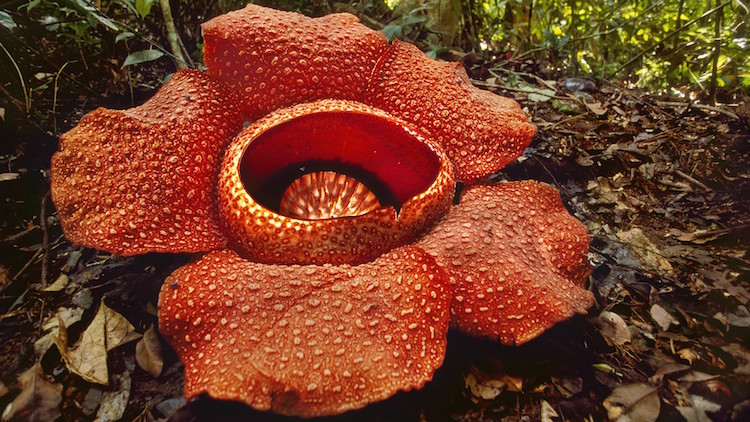 But other than the Rafflesia, it’s still a great place for trekking and to enjoy moments of solitude surrounded by nature. There were longer treks available which lead up to the waterfall.

The Gunang Gading National Park is about an hour drive from Kuching City and it’s near the Fairy Cave & Wind Cave. We would recommend to combine both activities in the same day.

3. You can get up-close with orangutans at Semenggoh Wildlife Centre

This has gotta be one of our highlights of the trip! We really enjoyed watching the orangutans in action up close while being in a habitat as real as possible. The Semenggoh Wildlife Centre is a rehabilitation centre for the orphaned or injured orangutans and once they are well enough, they will be released back into the wild. 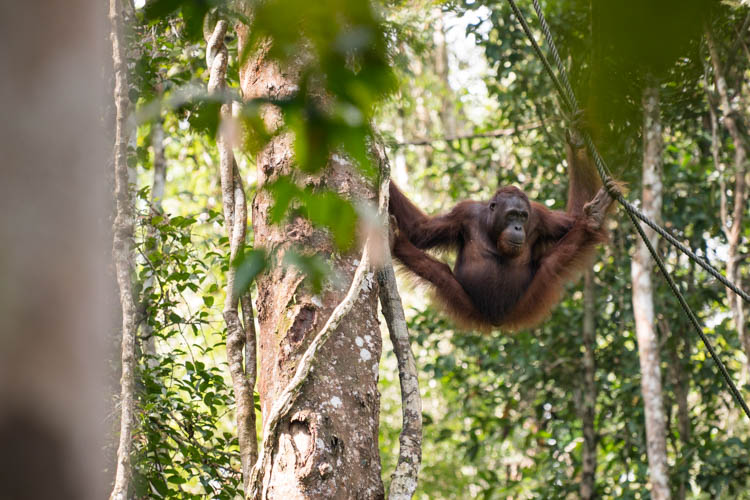 The trip began with a short trek into the forest where the feeding platform is. The ranger will then start taking bunches of bananas, coconuts while making a tarzan call at the same time to attract the orangutans. Not too longer after, we saw Ritchie (second largest male orangutan in Semenggoh) climbing the rope and greedily making its way towards to feeding platform. 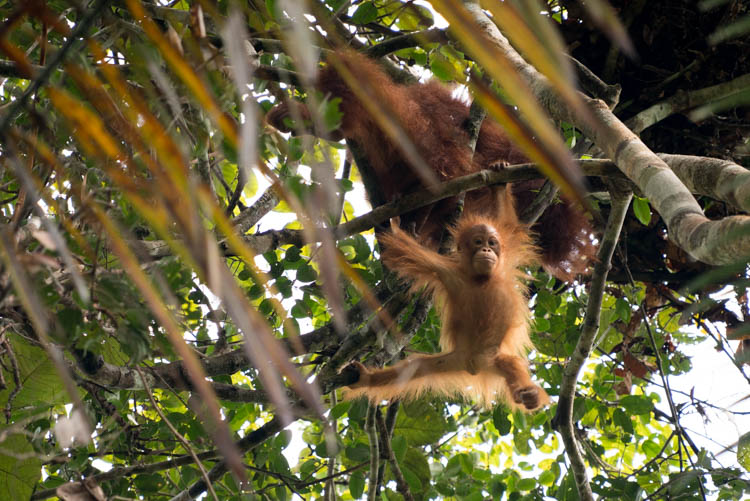 A mother orangutan and her baby soon began making their way to the fruits too.

Fun fact: Every orangutan builds 2-3 new nests everyday which are usually high up in the canopy, about 12-18m above the forest ground! They too are similar to human beings and dislike sleeping in soiled resting areas!

Go early around 8.30am to witness the active orangutans during their feeding session. It took us about an hour drive to get here from Kuching.

4. You get to understand the local traditions at the Sarawak Cultural Village 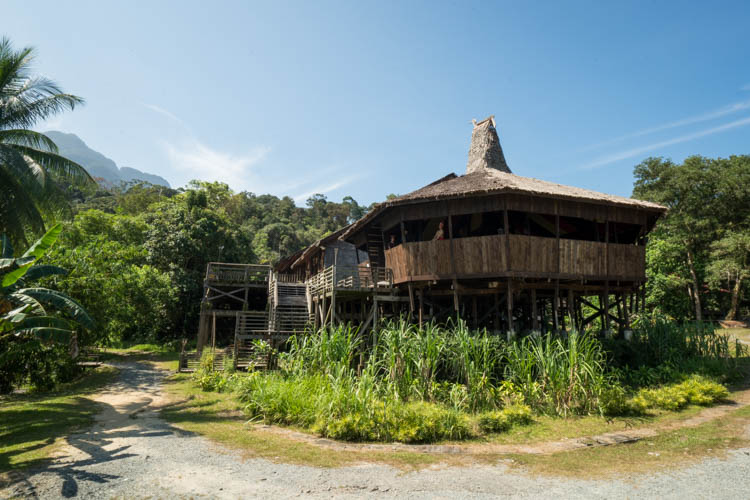 Traditional dwelling of the local ethnic group in Sarawak

Albeit being quite touristy, it’s still quite an eye-opener and a great introduction to all the different ethnic groups in Sarawak and the type of longhouses that they stay in. The ethnic groups consists of the Malays, Chinese, Iban, Bidayuh, Orang Ulu, Melanau and other minor tribes living together in harmony in Sarawak.

I used to be quite ignorant and assumed that there are only Malays or Chinese living in Malaysia! And interestingly, according to our local guide, 44% of the population in Sarawak are Christians! 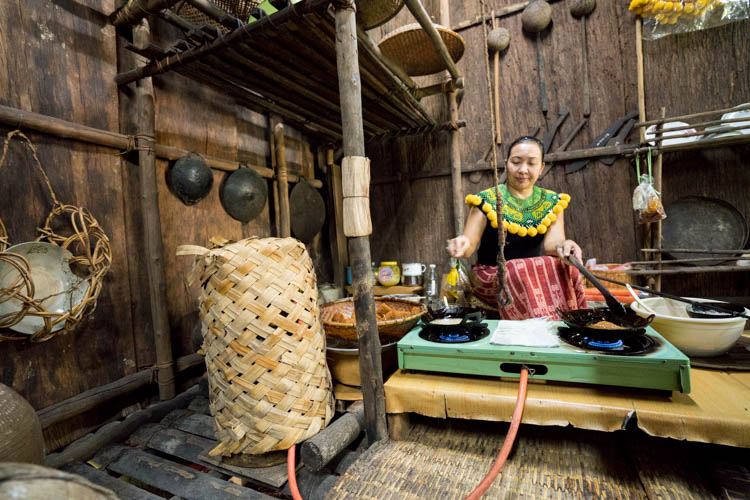 Freshly made locals snacks available for sale at each station! A must try!

Each ethnic group has their own traditions and believes. The Ibans, comprising the largest percentage of Sarawak’s population, are famous for being excellent headhunters. They used to collect human skulls and hang them high up in their living room as a record of their past victories. The skulls will then be smoked for 24 hours non stop because of their superstitious belief. 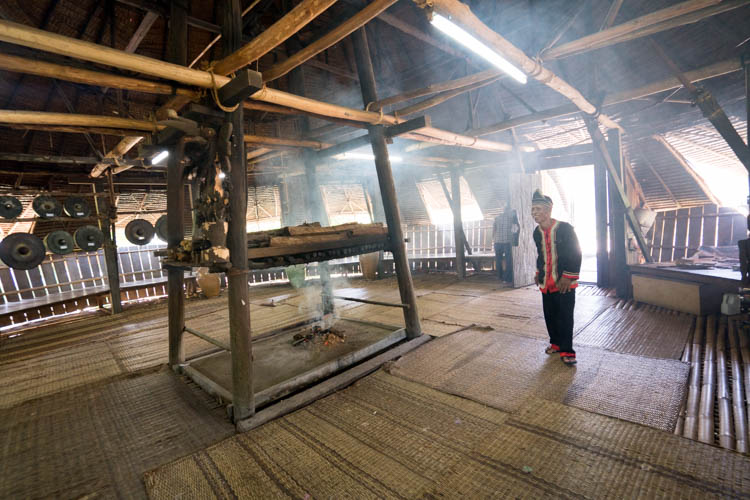 Inside the living room of a Iban longhouse, see that smoke? The human skulls used to be hung above it.

The purpose of this cultural village was to preserve and showcase Sarawak’s cultural heritage to the rest of the world. At the Cultural Village, you will receive a passport where you can get it stamped at each station (longhouse) and you can keep it as a souvenir once you’re done. There is also a 45mins theatre performance which demonstrates the local’s way of living as well as their cultural dance. 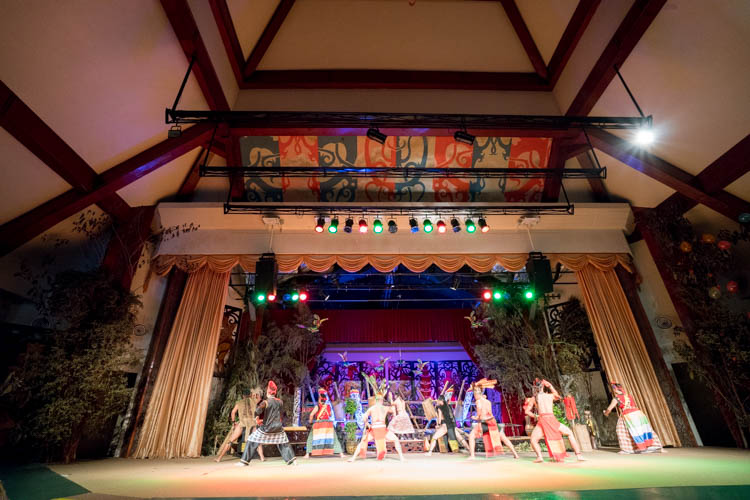 Entertaining cultural performances put up by the locals

We stayed at the Damai Beach Resort which was less than 5 minutes away from the Sarawak Cultural Village. Very cozy resort with a great view of the beach! It takes about 45minutes drive from Kuching to get here. 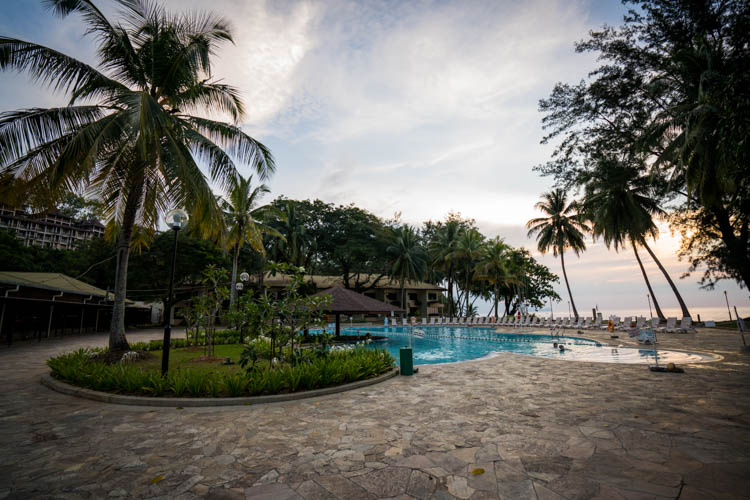 Thank you Damai Beach Resort for hosting us! 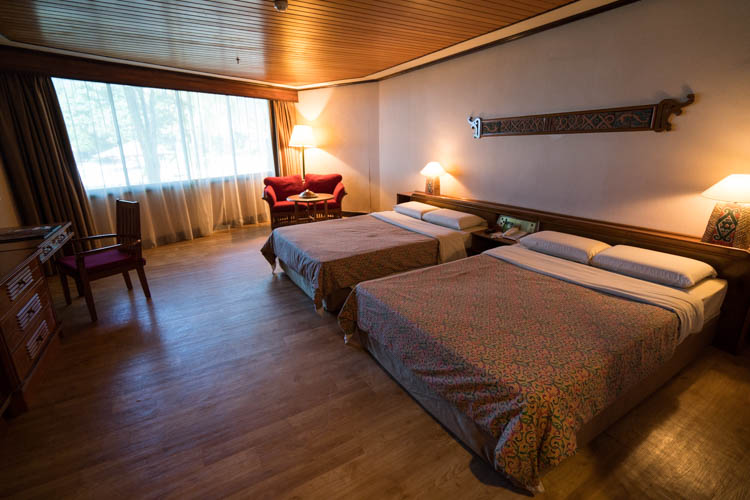 5. You get to visit a traditional longhouse 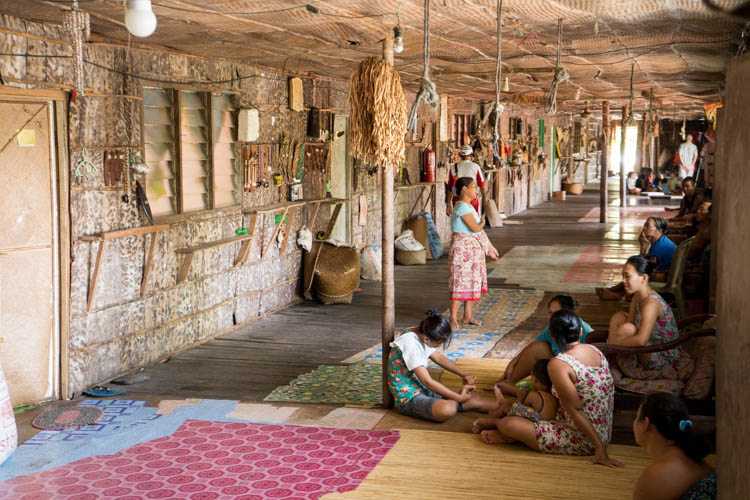 A authentic longhouse that has 30 different families living in it together!

A longhouse is the traditional housing of the local people and even up till today, there are still people living in longhouses. It’s literally a really long house made up of 30-50 rooms with a family staying in each room. There is a communal walkway outside the rooms for the families to interact and chill together.

Sometimes they will have a meal together and each family will contribute their own food and resources, kinda similar to pot luck. Also if any of the families need help, the rest of the families will chip in and help each other. We really appreciated this communal style of living, feels like everyone is very eager to help and share with one another. 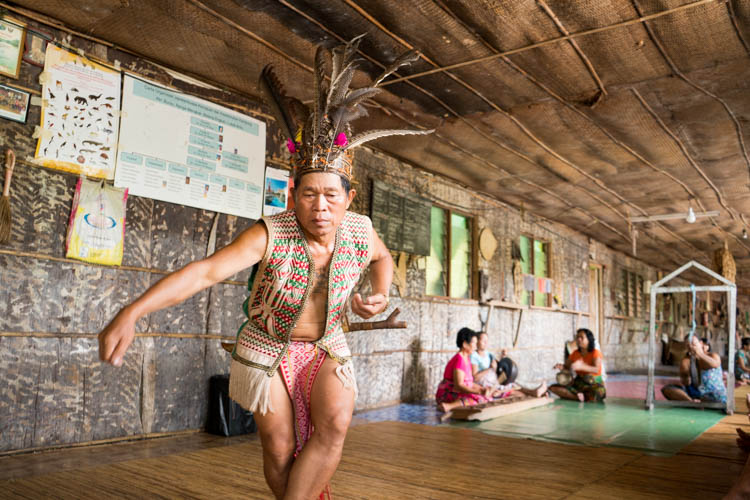 A traditional welcome dance by the local! 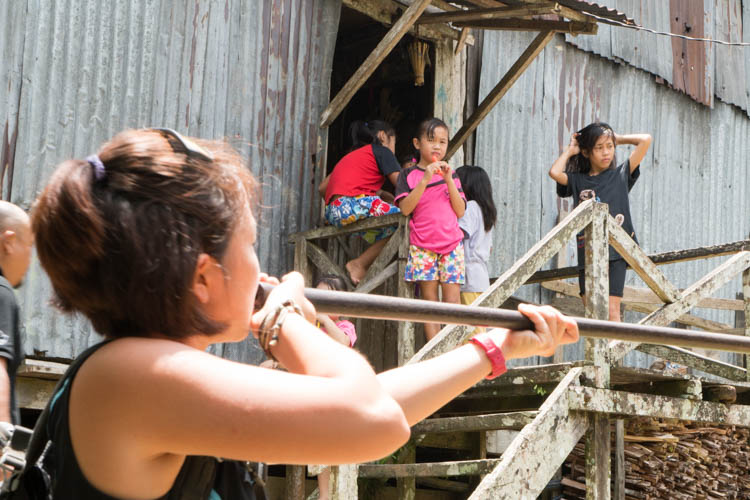 Trying out a blowpipe, not easy man! Amazing how they used to hunt with this!

From Batang Ai Resort, we took a long boat to the traditional Iban Longhouse for a lunch visit. If you’re travelling on your own or if you guide forgets, please remember to bring a gift for the children of the longhouse (not forgetting that there are at least 30 families living there!).

Usually for the gift, it’s advisable to get multi-pack snacks so that they can be easily distributed to each family. Apparently some tourists brought only 1 ball as a gift and you can imagine, all the children fighting over that 1 ball! 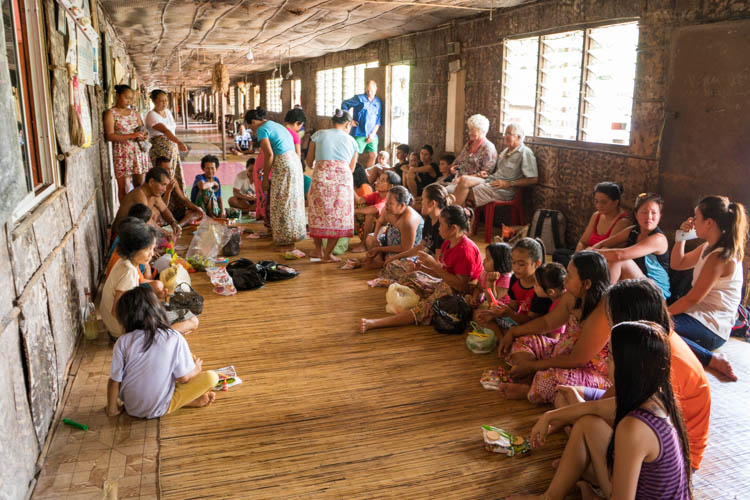 Tip: Do remember to slap on lots and lots of sunblock whenever you’re on a long boat! No shade at all and with the unrelenting sun, you can be assured of a more than beautiful tan once you get off the boat.

Trekking is also available at the vicinity of the longhouse but as we didn’t have the luxury of time, we only did a really short 30 mins trek. But otherwise, there are longer treks available as well if you’re planning on spending more time at the longhouse. Do wear long pants as there are many fish bone ferns along the trek which can cause some nasty scratches!

We stayed at Aiman Batang Ai Resort & Retreat, which was really remote and tranquil. It took us 5 hours drive to get here from Kuching. The resort was built to resemble a longhouse. Do check out the amazing sunset view at the lake! 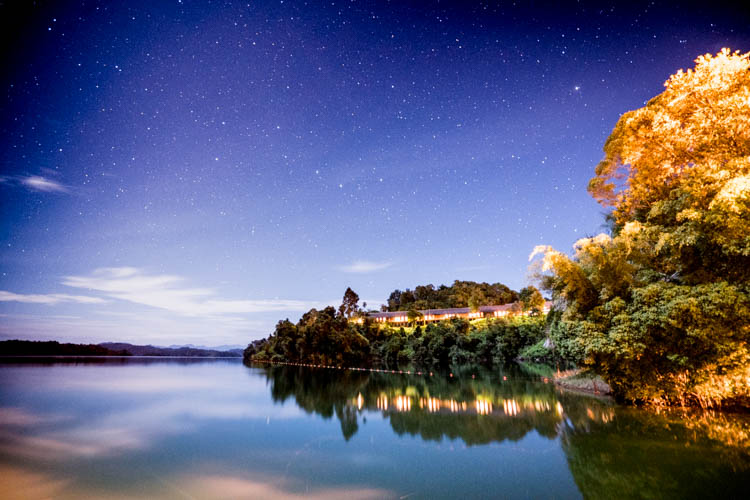 At Batang Ai resort, tucked away from the hustle bustle of the city! 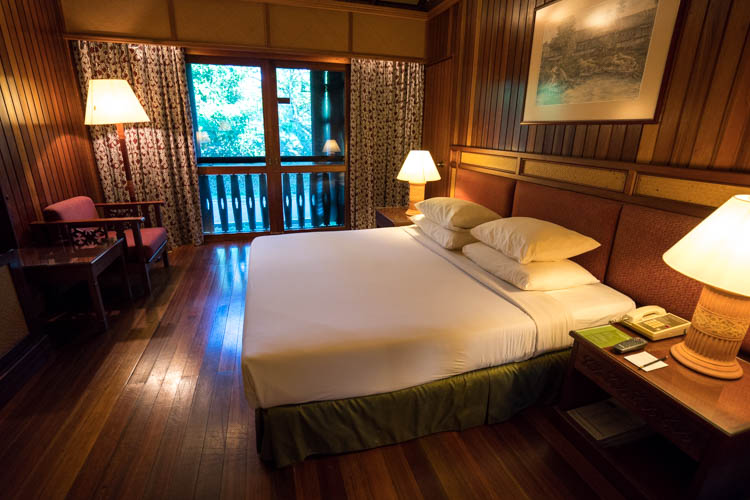 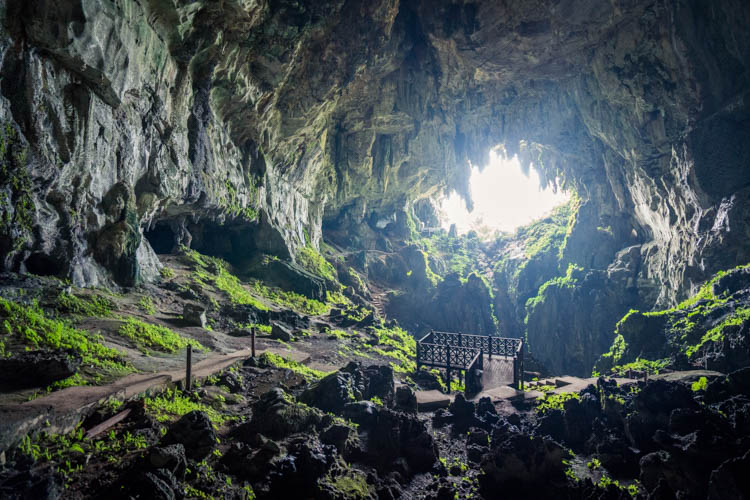 Inside the magical Fairy Cave

We are both cave lovers and always enjoyed exploring different caves whenever we travel. We’ve seen numerous caves during our past travels, but the caves here in Sarawak are nothing like the ones we’ve seen before.

There is a flight of stairs to climb before reaching the entrance of the fairy cave. The cave is really huge and what we liked most about it was that it felt very untouched. There isn’t any artificial light installed within the cave and visibility was dependent on natural sunlight and our torches. Apparently the local people used to visit the cave to pray to the Guan Yin statue that has been formed by the stalactites. The people also built this small fairy statue inside the cave and they worship it too. 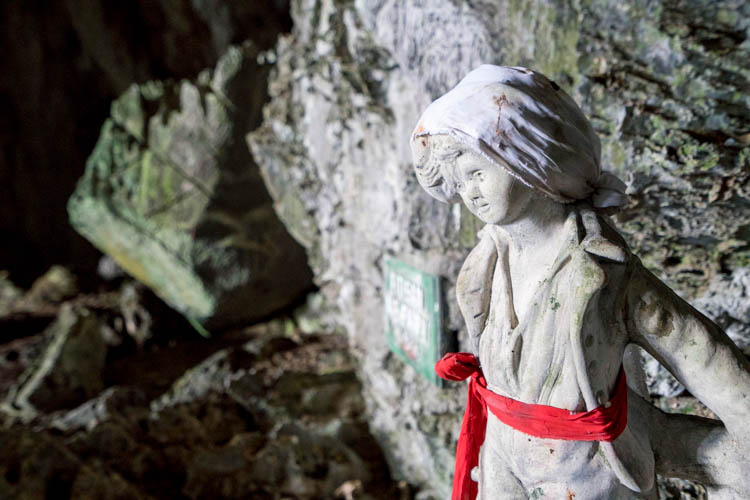 For the wind cave, it was definitely much smaller than the fairy cave and had lower ceilings. The ceilings were so low that you could easily spot the bats! Some of them were literally just in front of your eyes! Quite an interesting experience if you’ve never seen bats up-close before. 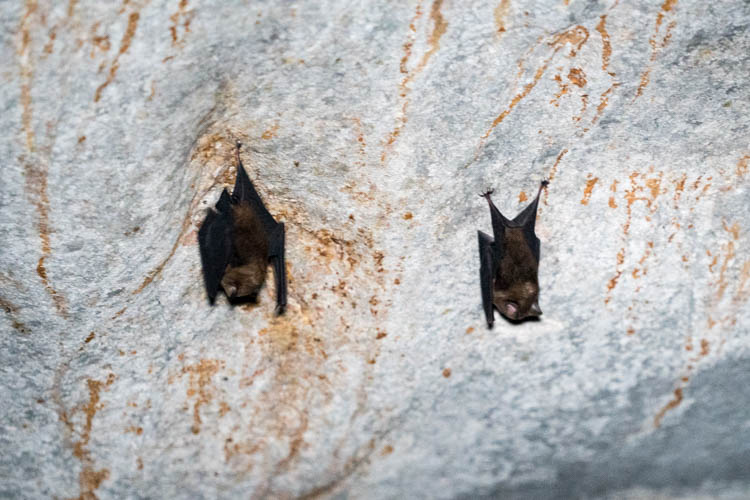 Close up of the bats! They’re quite cute aren’t they?!

It took us about an hour drive to get here from Kuching and you can actually visit the caves together with a visit to the Gunang Gading National Park in the same day since they’re both located nearby. 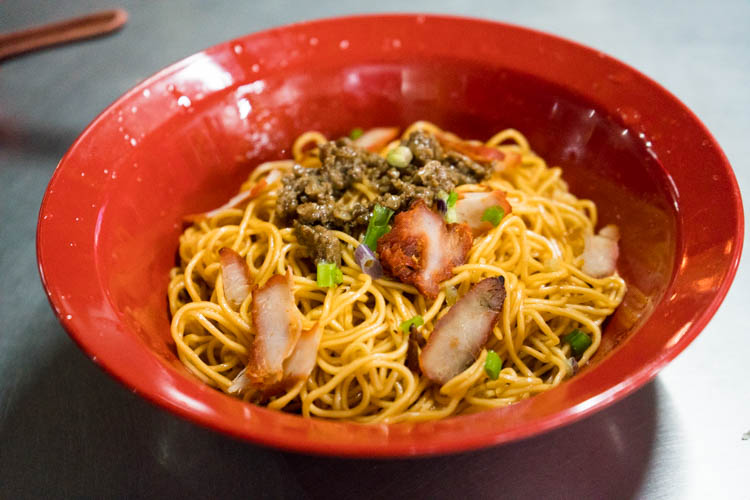 This has gotta be my highlight of Kuching! The food here in Sarawak is AMAZING! I especially love their kolo mee and the famous 3 layered tea (teh c peng special). It’s similar to the teh peng in Singapore but they use palm sugar instead of condensed milk. Just typing this now is enough to make me salivate. Sarawak is also very famous for their laksa which tastes very similar to mee siam in Singapore. We still prefer our Singapore laksa which has more coconut oil. Of course there is a lot more must try local food which deserves a post on its own (coming soon)! 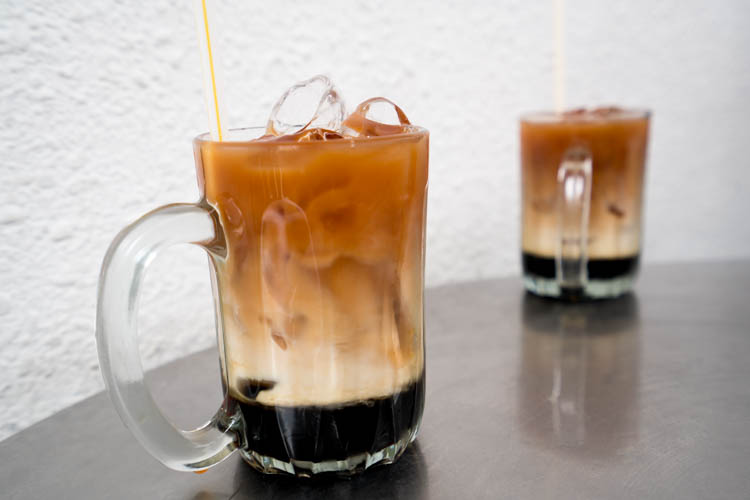 The must try 3 layered tea in Sarawak!

Where we stayed in Kuching 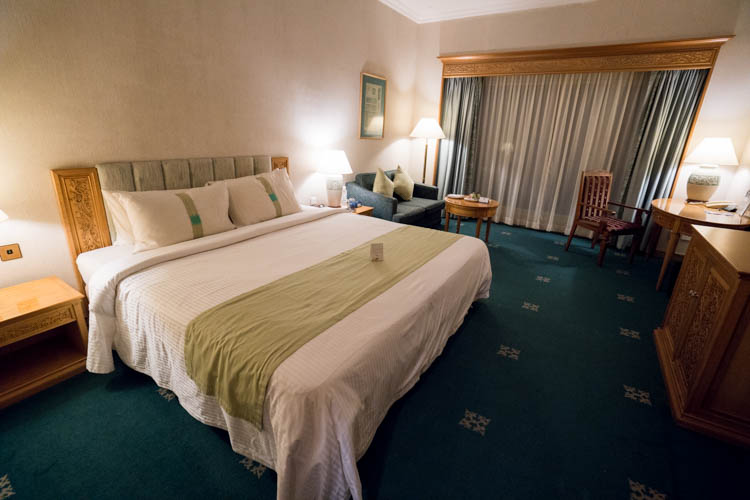 We stayed at Riverside Majestic Hotel which was just 5 mins away from the waterfront!

Its location was excellent as it’s just opposite the river and walking distance to the main bazaar, open air market, etc. The rooms were extremely comfy and the food was delicious! You have to try their buffet dinner which costs only about MYR99 per pax which works out to S$30. The buffet spread was very wide and they serve from Japanese food to local traditional food!

How did we get here from Singapore

We flew via Malaysia Airlines from Singapore direct to Kuching. The flight duration was only 1 hour 25 minutes.

How did we arrange the above tours

Most of the above places were really difficult to get there on your own as there’s hardly any public transport. You will probably have to charter your own taxi if you’re planning on getting there yourself. We did the tours with Amazing Borneo who settled everything from the accommodation to getting us to the attractions. This is our third time with Amazing Borneo and their service has never failed to disappoint us.

Thank you Amazing Borneo for arranging the tours in Sarawak for us!

Thinking of heading to Turkey? Find out what are the most overrated cities in Turkey and if they're worth going!