Skiing and Snowboarding in Central Asia

Disclaimer: The last time I skied was 15 years ago and it wasn’t really proper skiing. I only glided around a little at the beginner slope and didn’t dare take the ski lifts to a higher slope. So, I consider this experience as my first proper ski trip. Whereas for snowboarding, this was my first time trying it! Daniel on the other hand is more experienced and has done quite a few ski and snowboarding trips. He was also my extremely patient instructor for the day.

Skiing: The Ups and Downs

Like most first-timers, we would start out by dragging our skis to a slightly elevated slope and get a feel of skiing. It almost seemed impossible initially when my legs refused to cooperate with each other. My skis either went inwards (bow legged) or outwards or in opposite directions. Of course, I ended up falling most of the time. But after awhile, under the patient guidance of Instructor Bob, I kind of got the hang of it and managed to traverse down the entire slope without falling, and then he said, it was time to head to the next level.

The most exhilarating part of our ski trip was taking the ski lift to 3300m which was the 2nd highest slope at the ski resort after just trying out the beginner slope a couple of times and skiing (tumbling) down all the way. As I took the ski lift up to the top of the slope (which took 20 minutes by the way and it was freezing!), my heart almost stopped beating as I saw the slope. It looked so steep and intimidating! The heart-thumping factor was that beyond the pine trees that lined the path was a steeper slope filled with a myriad of trees. Imagine if you were to swerve off course, you’ll end up crashing into those trees at a lightning speed. I didn’t even dare think about the repercussions of that happening. I was confused for a moment if I was shaking because of the cold, or in trepidation. 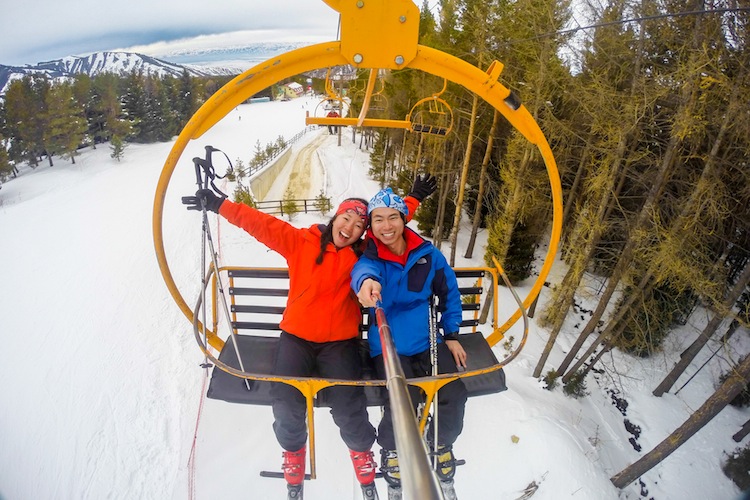 The slope was made up of different sections alternating between crazy steep and slightly gentler slopes. The steep section was so steep that when I fell, I literally slid all the way down to the bottom of that section, which was a good thing as I could also conveniently collect my detached skis and poles that were scattered around me. The most tiring part was getting up (while trying to balance on the slope) and putting back on all my gear. Finally after much struggling and falling, I finally made it to the bottom and was almost in tears from the shock, disbelief and an immense sense of achievement! 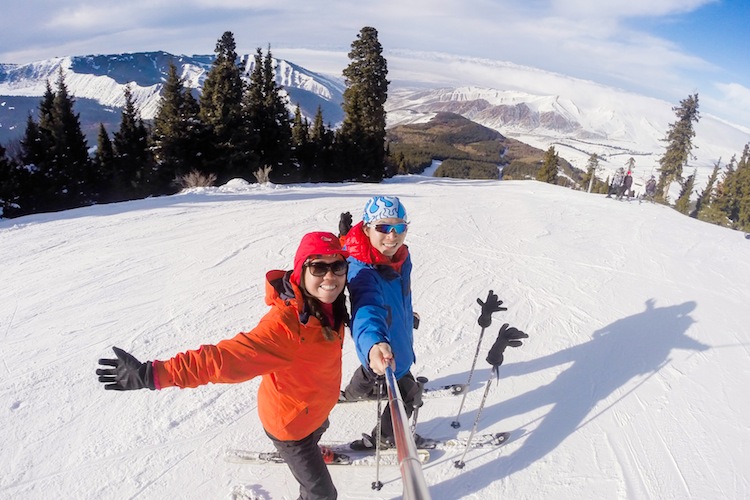 So yes, skiing is challenging, but once you get the hang of it, it’s exhilarating! The adrenaline rush from gliding past at a high speed, narrowly missing other skiers by an inch and feeling your heart race when going down a steep slope. Everything comes with a price, just check out the damage done to my legs. The dark patch is not a birthmark by the way. It’s my battle scar from fighting the skis. All’s worth it though 😉 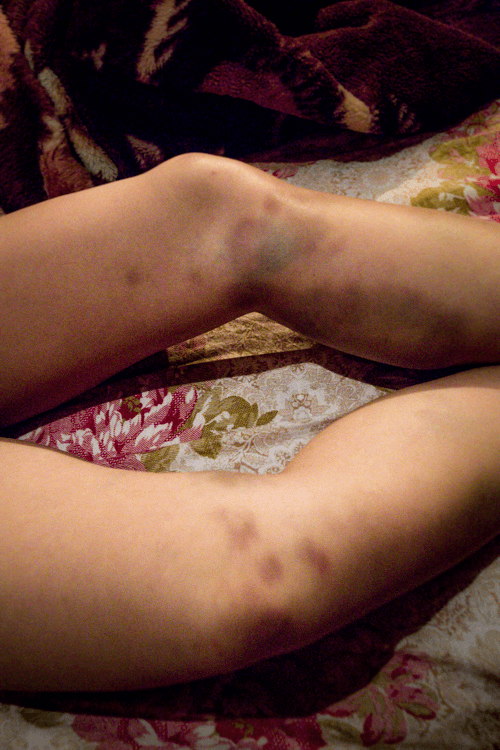 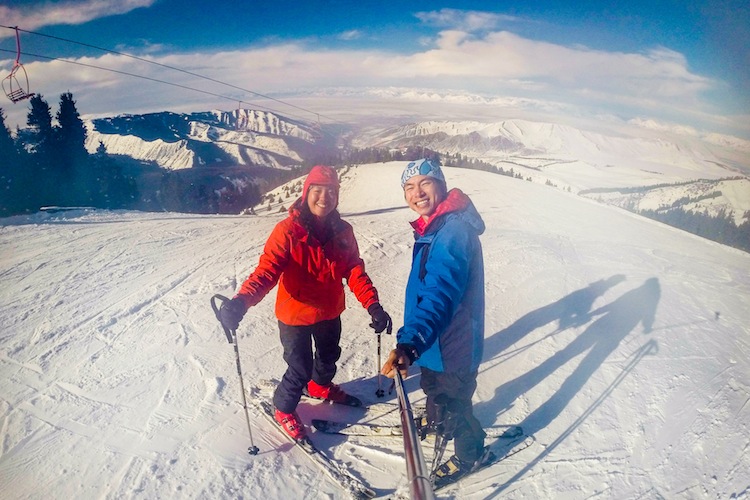 Snowboarding is definitely an interesting sport. It’s a total different ball game from skiing. It was a challenge trying to switch my mentality as I only just learnt skiing the day before. One thing interesting about snowboarding is that the snowboarder can be leaning very much to one side and yet still balance on the board without falling over. It really seemed as though he was defying gravity! 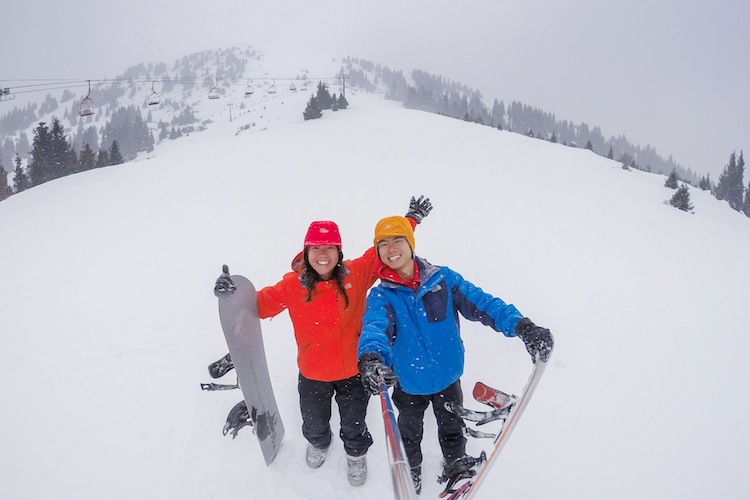 Again after just a couple of practices on the beginner’s slope, we took the ski lift to 3300m to challenge ourselves. As we were going up, the weather started to change. The fog intensified, snow started to fall and the temperature dropped drastically. We were joking that by the time we reached the top of the slope, we would have turned into human popsicles. 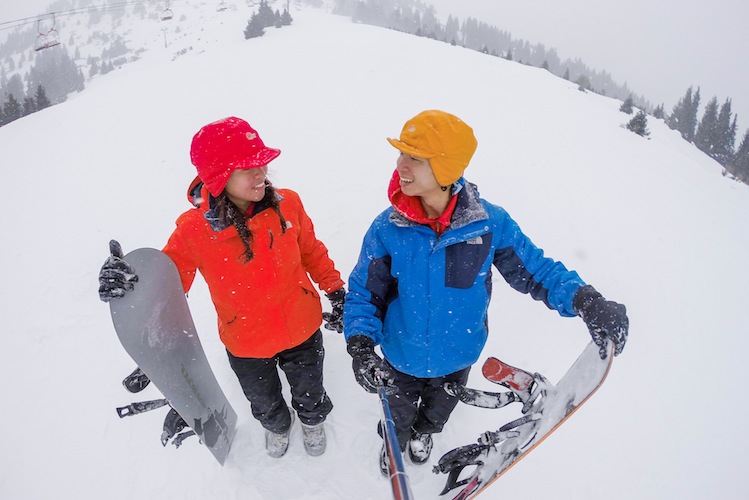 When we finally alighted from the ski lift, we were in the midst of a snow blizzard! Visibility was probably less than 5 meters and some skiers even had headlights on (good idea actually)! It was no joke trying to snowboard down the slope in such a crazy weather. Snow kept flying into my face and eyes from all directions and we didn’t have any ski mask on to shield our eyes. I could hardly keep my eyes open and it was scary as hell as there were many pro skiers racing down the slope despite the almost diminished visibility. But luckily, somehow we made it to the bottom of the slope, alive and unscathed. 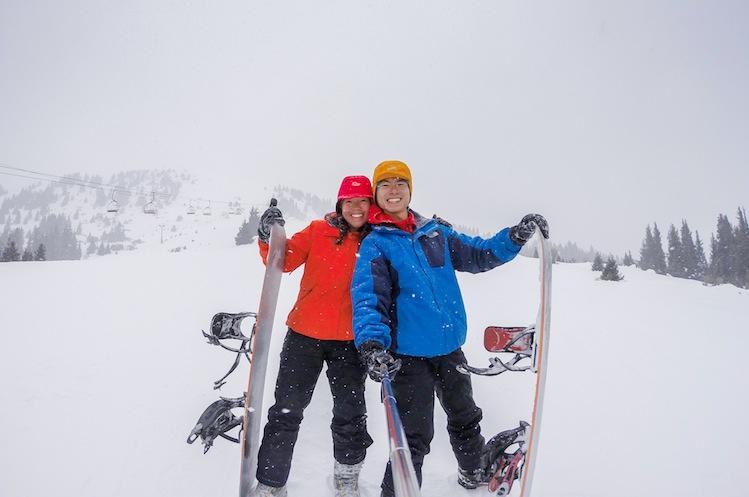 To me, snowboarding was easier to grasp as compared to skiing. Maybe because I’ve done wake boarding before and the feel was somewhat similar. Although when I first snowboarded down the beginner’s slope, I fell the entire way down. But I guess that’s how you learn, if you don’t fall, the fear of falling will always be there and you’ll be too scared to take the next step.

Overall, skiing here in Central Asia is really affordable as compared to the other more commercialised places like Japan or Korea! It’s also less crowded and at times you feel like you have the whole slope to yourself, which is good for a beginner!

When to go
Nov to April

Where
Karakol Ski Resort
(One of the staff, Sergei, provided us with excellent service! I had problems finding the correct fit for my ski shoes and he patiently gave me multiple shoes to try and even stepped out of his counter to assist me with wearing and tightening my shoes.)

Tip: It’s best to arrange a taxi to pick you up from the ski resort when you’re done as rarely there’ll be taxis available at the resort. Most people drive their own vehicle there instead. Or if you dare to take the risk of having to walk your way back down, you can try hitch hiking. We did that on our first day and thankfully after multiple failed attempts, a jeep finally stopped and agreed to give us a lift. They were kind enough to send us all the way back to our hostel!

Any recommendations for other awesome places to ski or snowboard? Do share it with us in the comments below! Do also check out our experience on snowboarding at Arslanbob, Kyrgyzstan!

« Our Favourite Treks of Twenty-Fourteen » Part 2: The Long Journey to the Hot Spring at Altyn Arashan

Our Favourite Treks of Twenty-Fourteen

Some of our most memorable and interesting treks of the year. Trekking in different seasons and terrains, these 5 places...