A must-visit in Iran, Qeshm Island

Even if you’re not a geology buff, you will still be in awe of the unbelievably stunning natural landforms at Qeshm Island in Iran. The dramatic jagged canyon ridge lines, longest salt cave in the world and the photogenic fishing village are definitely a must see!

We were very fortunate to have met a local family in Qeshm Island and to spend 3 days 2 nights there with them. True to the genuine hospitality of Iranians, this family was very kind to host us and to even bring us around! Otherwise, it would be quite hard to travel around Qeshm Island without our own transport as there was no public transport at all 🙁 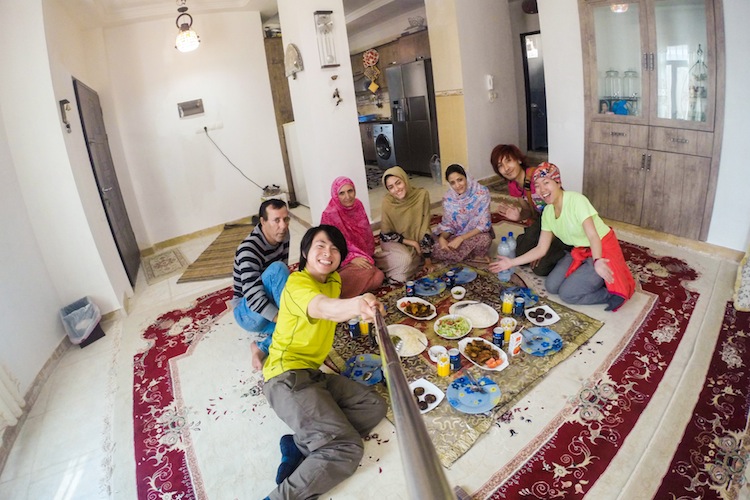 A sumptuous feast prepared by the mother of the family

We have always enjoyed interacting with the local people and to experience their way of living to really feel immersed in their local culture. I was very fortunate to have been able to attend a pre-wedding celebration with the ladies of the family! Only females were allowed at this ceremony and it was such an interesting experience! No photos of the wedding ceremony though as the ladies were apparently very camera shy.

After taking almost an hour to put on their best dress (after switching between numerous outfits), they wrapped themselves up entirely in a colourful patterned chador that hid their shimmery tightly fitted dresses. At first I thought that they will remove the chador after arriving at the party, but strangely, their beautiful dresses remain hidden under their chador the entire time and left without anyone even seeing what they wore to the party.

The ceremony was held at a court yard of the bride’s house where her family, relatives and friends sat along the walls on a carpeted floor. The empty space in the middle was ostensibly a dance floor and a place for the bride to ‘show off’ her prenuptial gifts from her husband’s family. The gifts will then be passed around and the ladies took turns admiring and gazing covetously at them. Loud music blared at the same time and in between the gifts presentation, some of the ladies grooved to the music on the dance floor. Although most were too shy to dance, especially the older ladies. No photos at the actual party though as they ladies didn’t like having their photos taken! 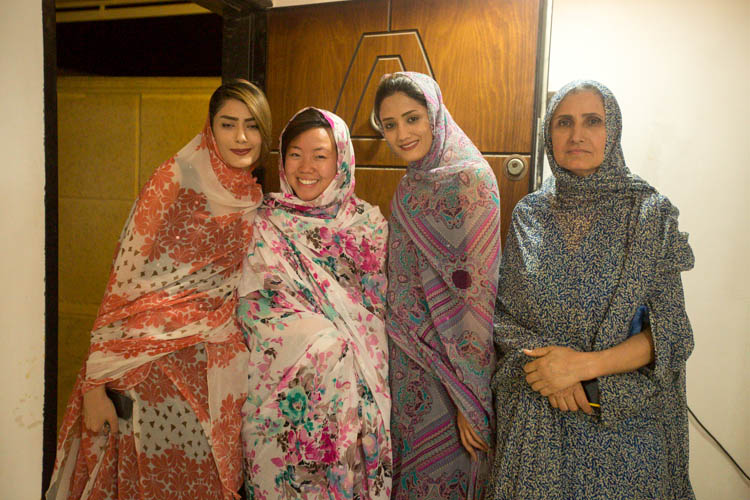 All wrapped up in our colourful chador ready to attend a local wedding celebration together with the ladies!

The next day we were all hyped up and excited to explore the amazing geology of the island! 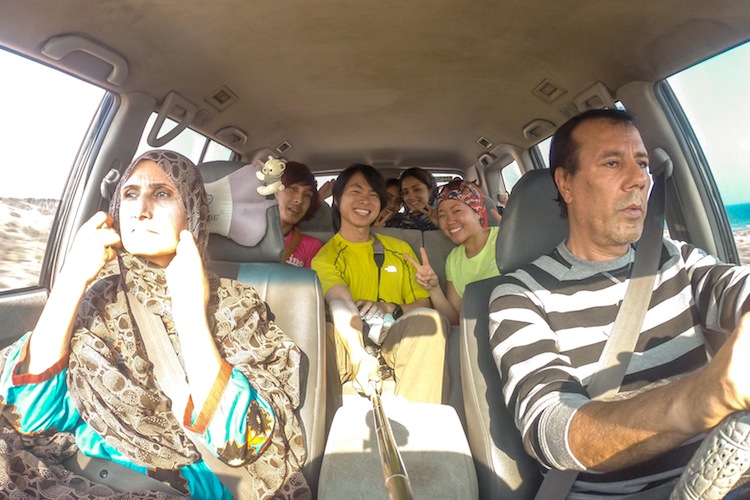 Off we went on our little road trip around Qeshm Island!

There are still 60 Bandari villages at Qeshm island and you will be able to see some of the older generation women wearing a traditional mask that covers the top half of their face. These ‘masked ladies’ can only be seen here in the south of Iran, mainly Bandar Abbas and Qeshm Island. 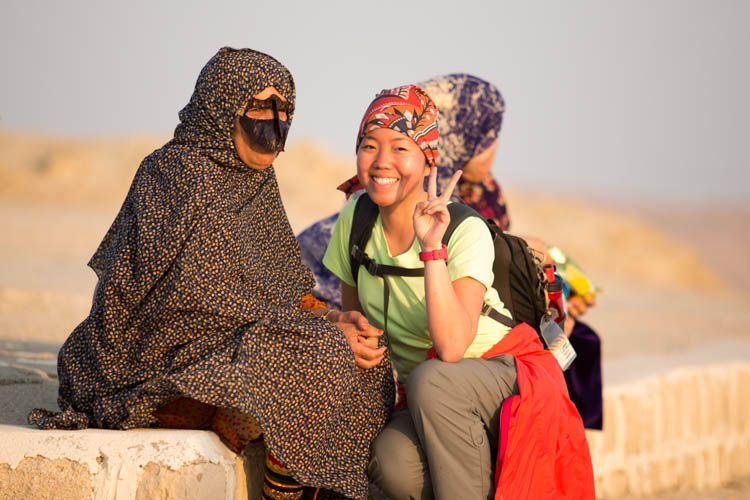 With a masked Bandari lady at Qeshm Island 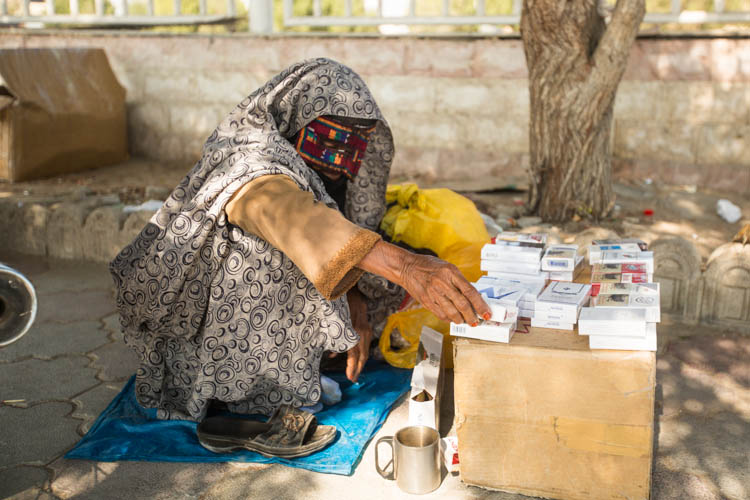 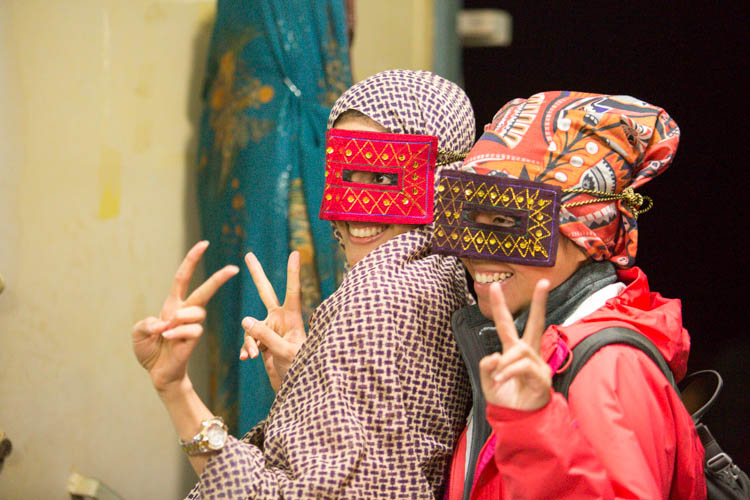 Trying on a Bandari mask at a shop in Qeshm Island

The ladies of Qeshm Island were well known for their expertise in golabtoun douzi, the sewing of colourful designs on fabric. They even sell handmade masked dolls that symbolise the masked Bandari ladies! These ladies were part of the “Art for Conservation” project where the income made from selling these handicrafts to tourists goes back to them as well as local conservation projects. We feel that this is a really great project as it helped achieve economic independence for the local women who have to otherwise stay at home and depend on their husband financially. 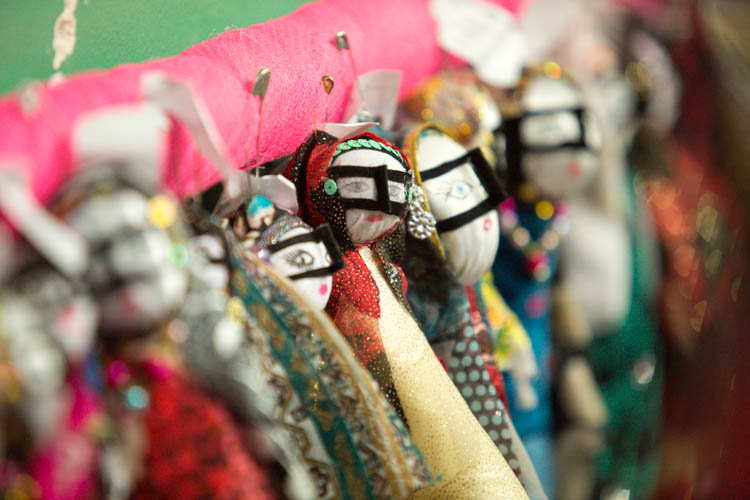 The Laft fishing village is part of the very fast disappearing traditional culture of the Persian Gulf. The Laft is very photogenic especially during sunset. 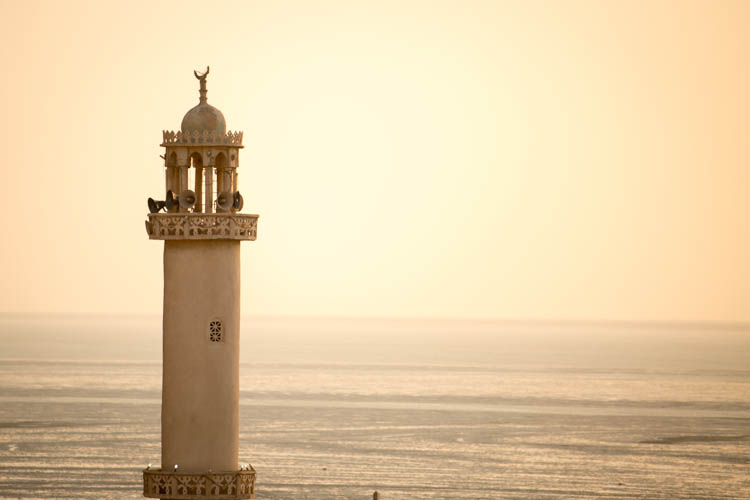 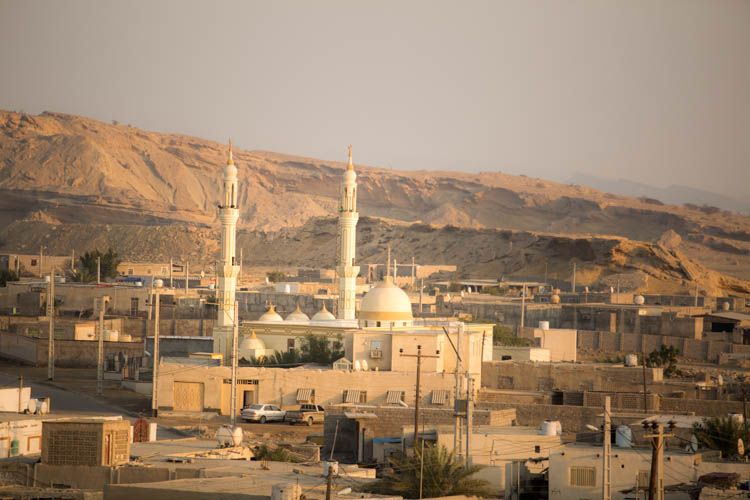 Near the Laft, you can also visit the lenge-building yard where you can witness many huge traditional cargo ships in the making. These ships were being used to ferry goods along the gulf. 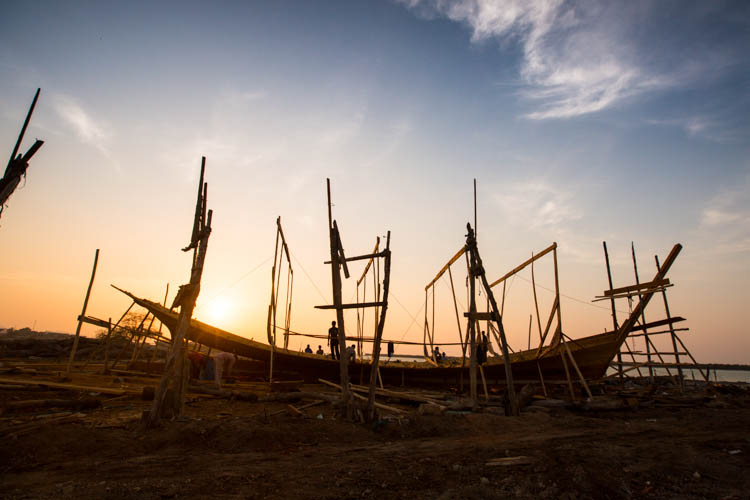 At the lenge-building yard near Laft in Qeshm Island 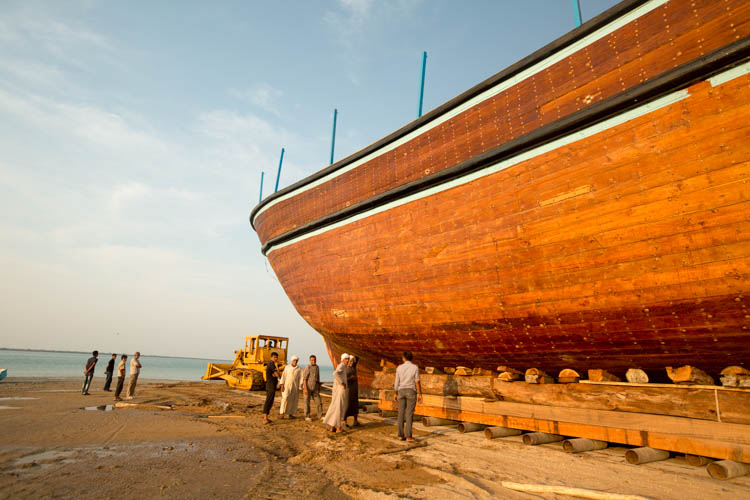 Our first time witnessing a humongous ship being rolled out into the sea!

Next up, the highlight of the day – Qeshm Island Geopark! There are 2 main sights here, the Namakdan Cave and the Chahkooh Canyon. We visited the Namakdan Cave first which was the world’s longest salt cave (6.8m) and it was such an unexpectedly adventurous experience for us! At first we thought that it would be like the usual commercialised salt caves with its stalagmites and stalactites, but hey, we were so so wrong! 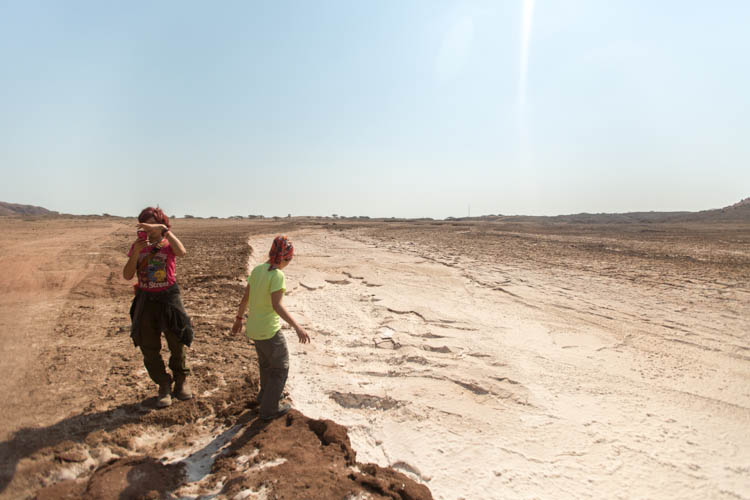 Checking out the hardened salt lake!

Lo and behold, this was the entrance to the Namakdan Cave! Not kidding! The cave’s entrance was probably only around 1 meter or less and we had to bend our knees and lower our bodies to enter the cave! We definitely weren’t expecting to enter a cave with such a narrow entrance and filled with water that reached up to above our ankles and even knees in the inner part of the cave! Also, there wasn’t any formal ticket booth or something, or maybe our host family brought us to another entrance of the cave, we would never know.

Tip: If you’re visiting the Namakdan cave, bring a pair of flip flops along! Unless you want to crawl around the cave in uncomfortable wet shoes filled with salt crystals that will rub painfully against your feet. 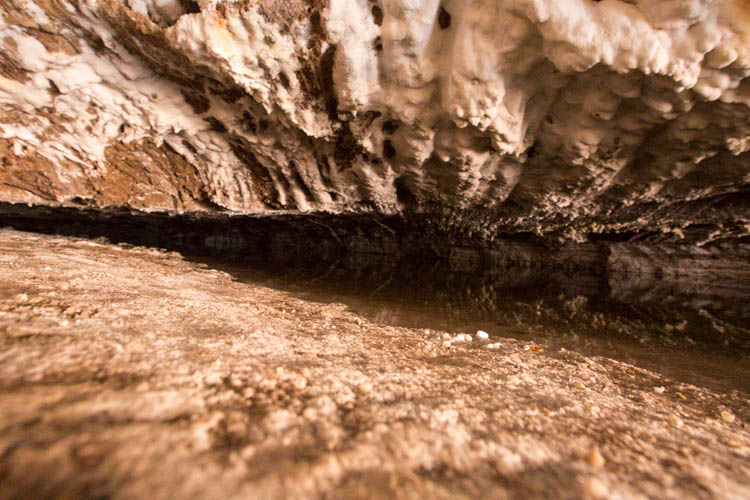 The unbelievably narrow entrance of Namakdan Cave in Qeshm Island

We were already not so tall and we found it rather challenging and tiring to bend our bodies at an almost 90 degrees angle for quite a distance before it opens up to a larger part of the cave where we could stand up straight. Can’t imagine for the bigger and taller people, probably a torturous experience! 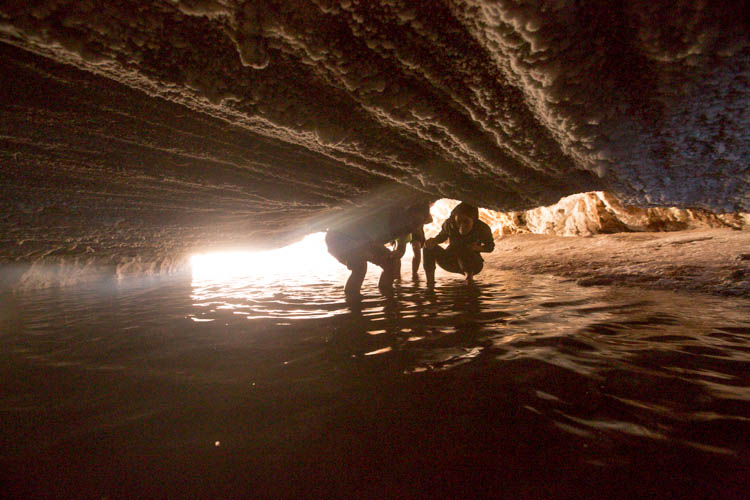 That’s me! Struggling to stay low to prevent my head from getting scraped by the cave’s ceiling!

Here’s our very tall friend, Hiro, struggling to keep himself safe while crawling through the cave! As he was much taller than all of us, he had to clamour around on his hands and knees, thus you can see that his slippers were on his hands instead of his feet! 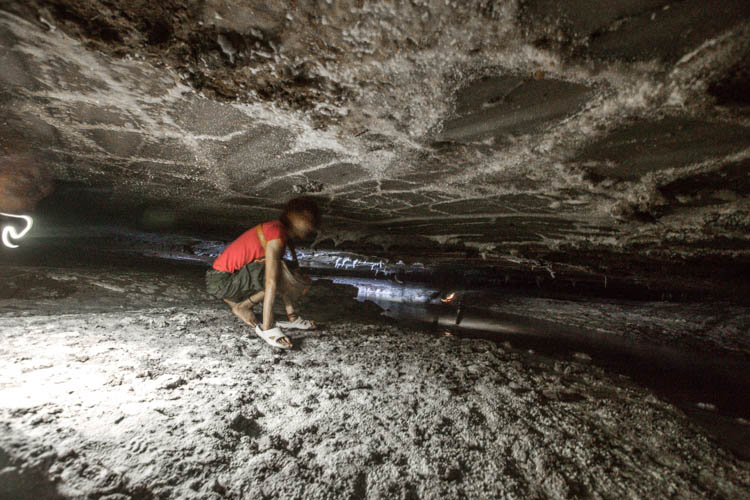 Our very tall friend struggling inside the cave!

Finally after some back breaking moments, we reached the inner larger part of the cave where we could stand up comfortable without hitting our heads against the rocks! By the way, the cave was HUMONGOUS! The salt formations inside of the cave were sublime, untouched and surreal! Somehow this experience felt really different from the other commercialised caves that we’ve been to. We really enjoyed exploring this cave very much!

Tip: Make sure your guide or yourself bring along a high luminance torch! The cave is practically pitch dark and without the light, it’s impossible to find your way around. Though there’s a string that leads you all the way into the cave and out. 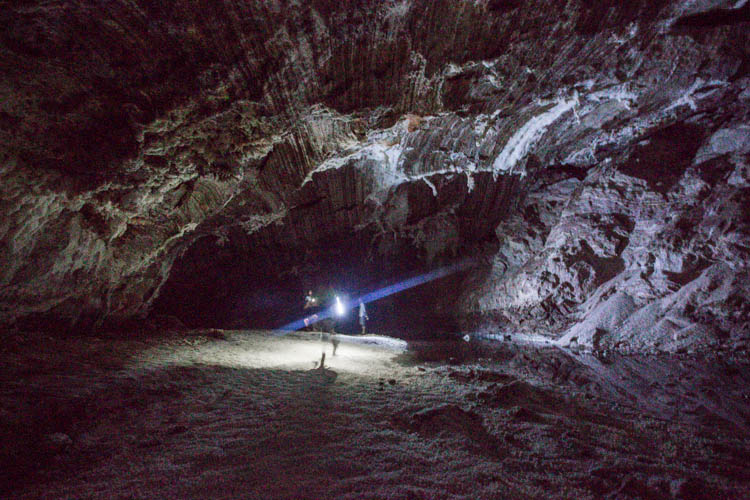 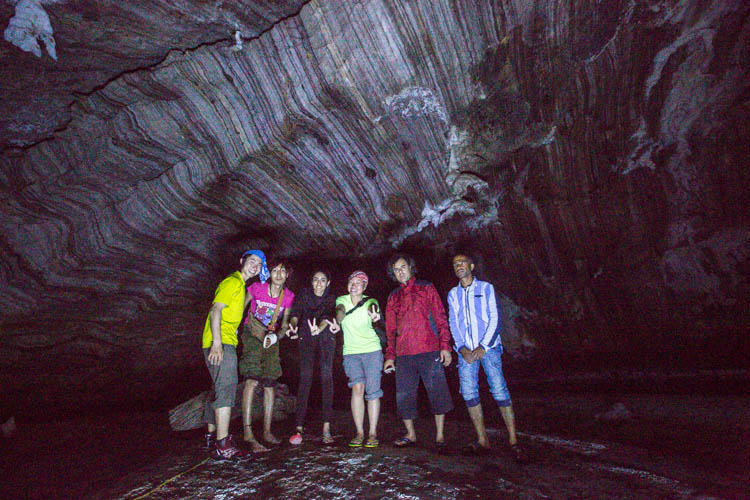 All of us inside of Namakdan Cave

Also, be prepared for your entire body, hair and clothes to be covered in salt crystals! Look at our crystallised pants, the aftermath of exploring the Namakdan Cave! 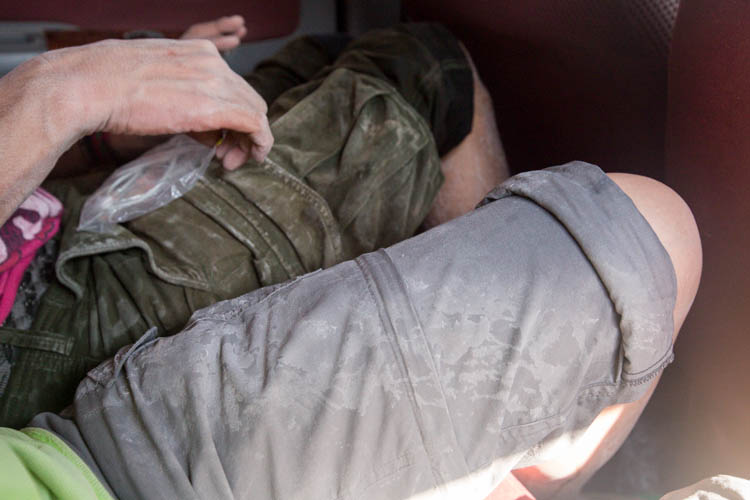 The drive to the Chahkooh Canyon was so picturesque! The landscape here at Qeshm Island is really unique and different from others, its sand ridges were spectacular. 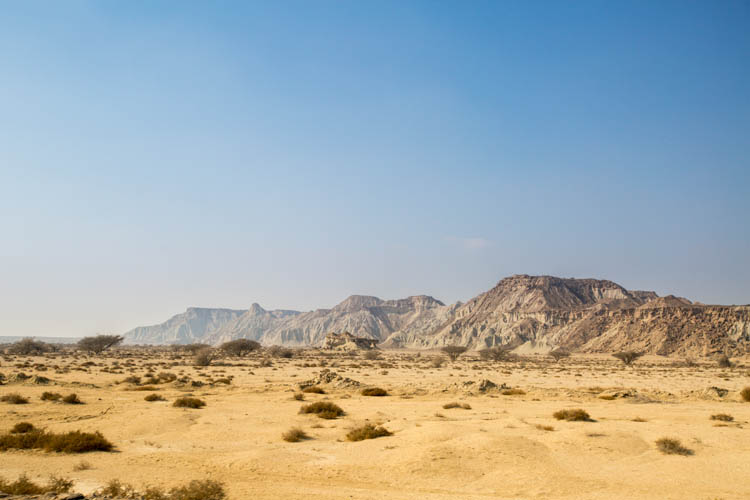 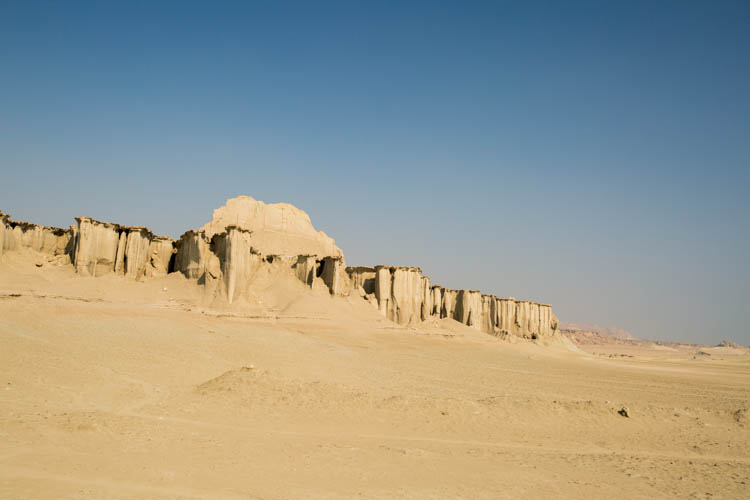 If you think the above was amazing, wait till you see the Chahkooh Canyon, it was mind blowing! Just look at the dramatic layered ridge lines of the canyon, it was so picturesque! 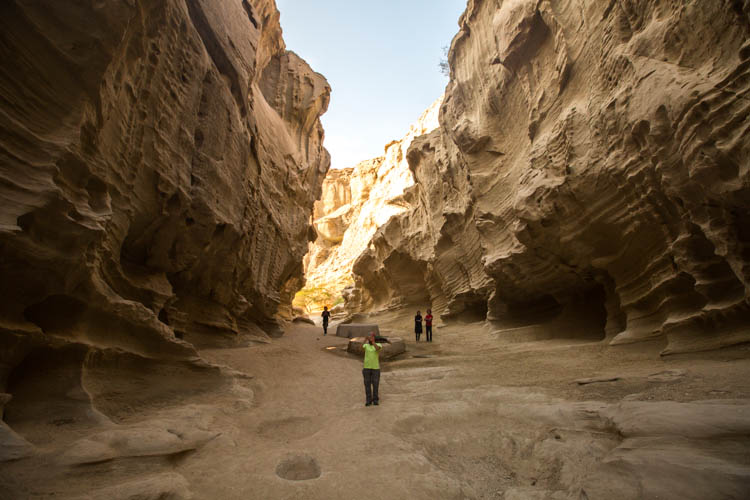 The ever incredible Chahkooh Canyon of Qeshm Island! 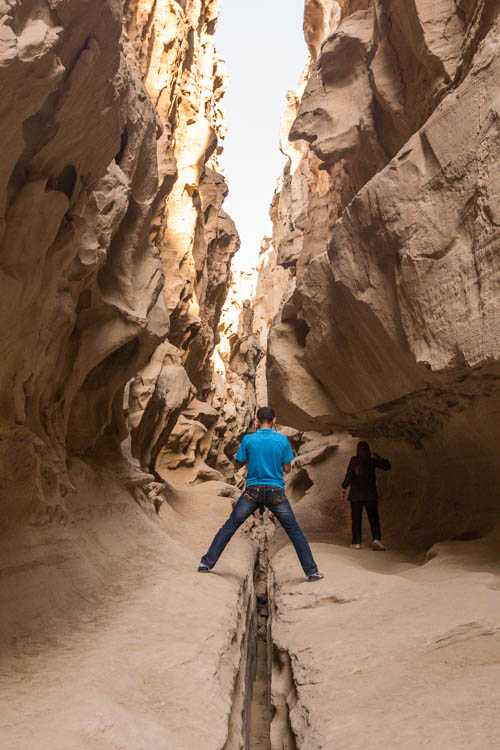 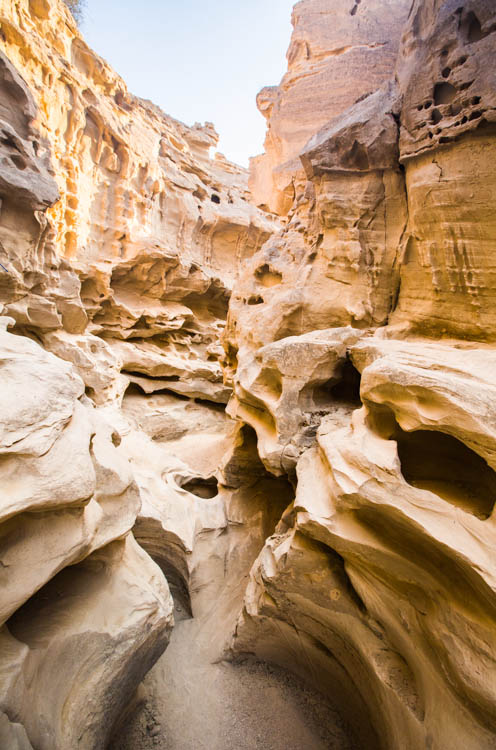 We definitely highly recommend Qeshm Island to travellers coming to Iran, it’s worth the time and effort to get there! This mesmerising island is certainly one of our favourite places in Iran.

How to get here
We took a ferry from Bandar Abbas, 10,000 Rial per person.

How to get around Qeshm Island
No public transport available to the attractions, you’ll have to hire a private taxi to bring you around. 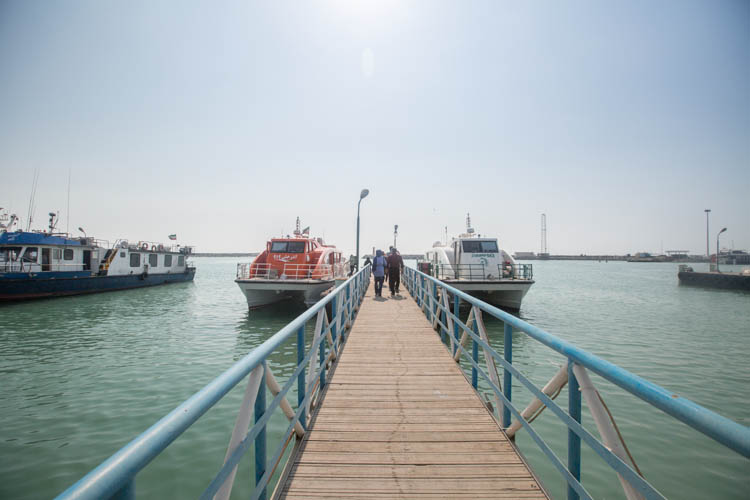 At the ferry terminal to Qeshm Island

Have you been to Qeshm Island before? What was your experience like? Share it with us in the comments below!

« Our Experience on Hitchhiking in Turkmenistan » Things to do in Shiraz – the land of poetry, nightingales, wine & flowers

Our Experience on Hitchhiking in Turkmenistan

If you're thinking of hitchhiking in Turkmenistan, think twice again! Our very long journey from Turkmenistan to Ashgabat.