Is It Worth it To Visit Chitwan National Park?

Being wildlife enthusiasts, we were very excited when we found out about this National Park in Nepal. We read that it’s famous for their wildlife and beautiful landscape. So here’s how our experience went…

One of the most calming and beautiful sunsets we’ve ever seen. 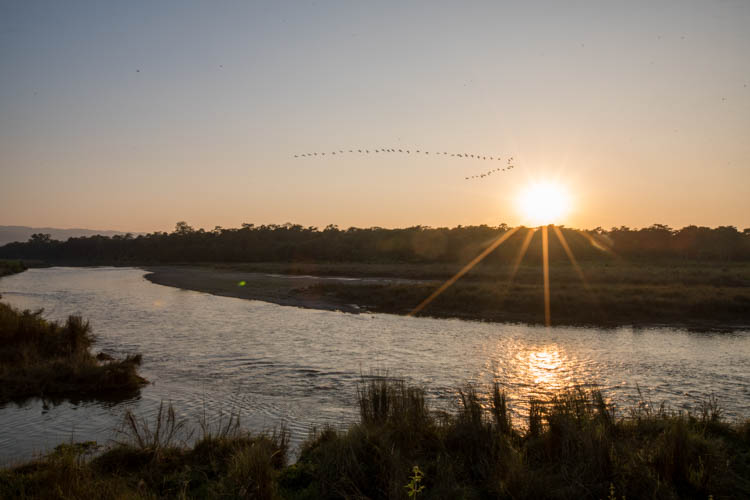 Sublime sunset view at the river in Chitwan National Park

Take a stroll down the river during the evening and enjoy the sublime view of the sunset against the river. 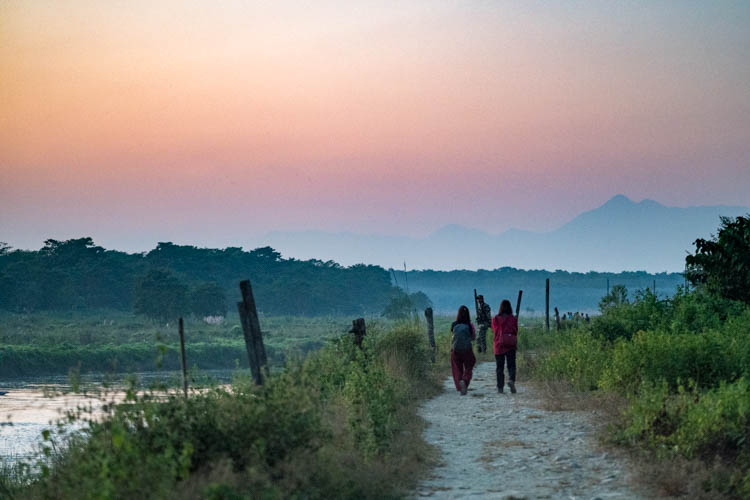 Very pretty colours in the sky!

If you’re lucky like us, you can even spot a rhino near the river! It was really close to us, say around 50m away? We were all in a ready-to-run-anytime mode in case the rhino suddenly charges at us.

Safety tip: Never stand in front of a rhino, always stand behind it. As once you’re in front of it, it might end up charging towards you! But it can’t turn its head, so if you’re at the back, you should be safe! 😀 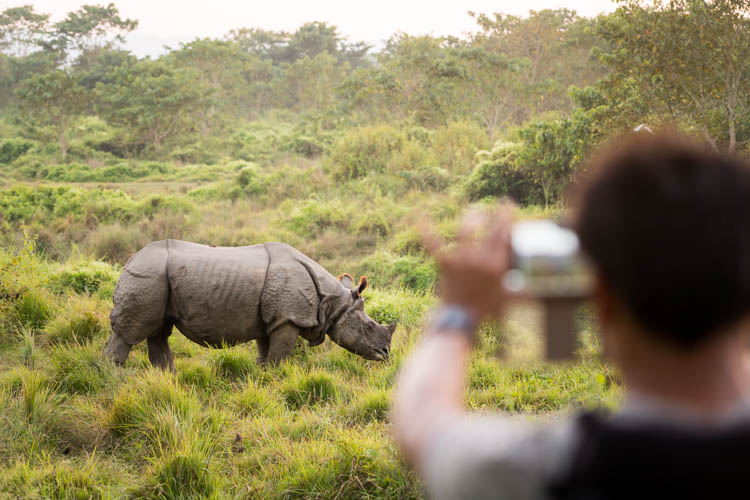 Spotted a rhino on our first day in Chitwan!

Where else can you find elephants and rhinos strolling down the streets?

Only in Chitwan National Park. The elephants were on their way home after a long day of hard work (we don’t support elephant riding though, see below). 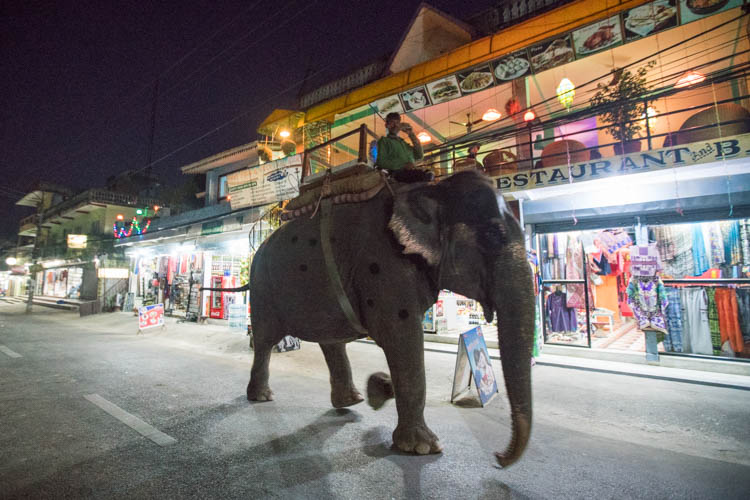 Watch out for the humongous elephant poops all over the roads!

This rhino situation was really funny though. We were casually walking down the streets when suddenly people ahead of us started to warn us to step onto the sidewalk as a rhino was coming!

True enough, shortly after a rhino trudged along! It was hilarious to see the huge crowd that formed behind the rhino, each attempting to take their prize shot. Apparently this happens quite often though, poor rhino, he must be feeling so lost in this foreign urbanscape! 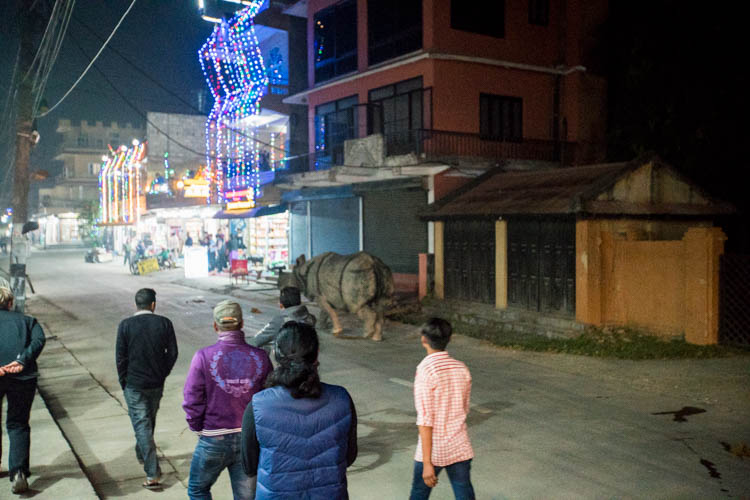 Just a rhino trudging along the streets on a random day

A much cheaper alternative to the safari in Africa.

We know that it can’t be compared to the safari in Africa but for now we will make do. At least we get to see one of the big 5s of the Africa’s safari – the rhino! 😀 There are several activities that you can do, we did both the canoe and jeep safari.

40 min canoe ride to scare the shi* out of you 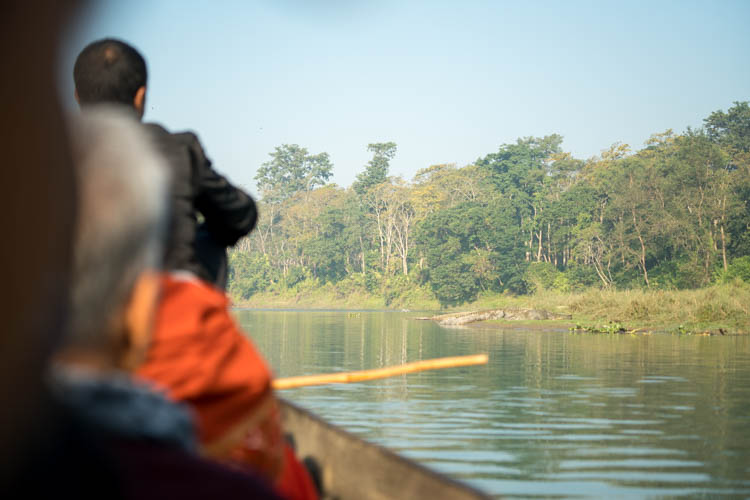 Basically it’s a slow 40min boat ride that brings you really close to the sleepy and seemingly immobile crocodiles in the river. Sometimes we wonder whether are they even real, maybe they were planted here? 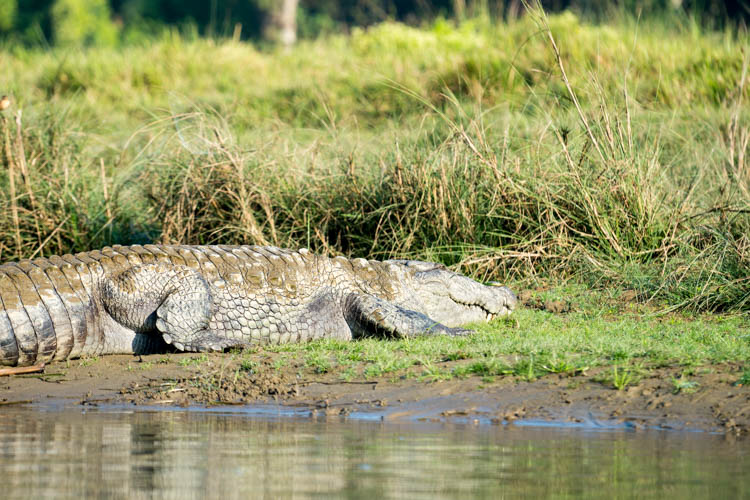 If only we can be like a crocodile, eat and sleep the whole day.

Then you also get to enjoy the view of these majestic creatures, but it’s also very saddening at the same time when you see the way these animals are being mistreated. 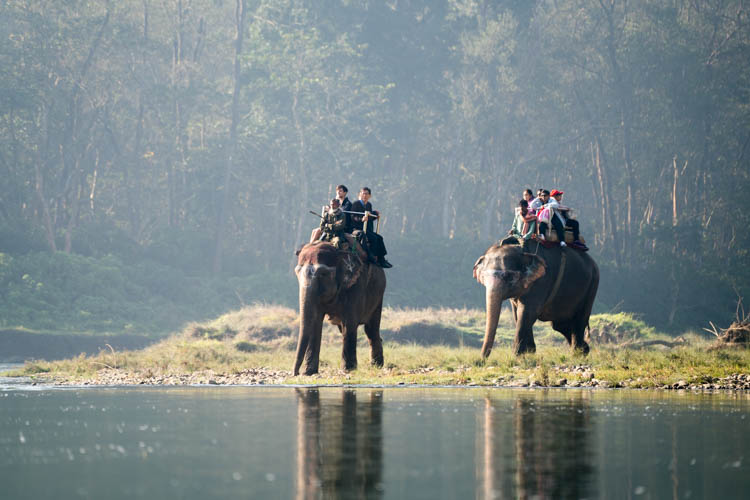 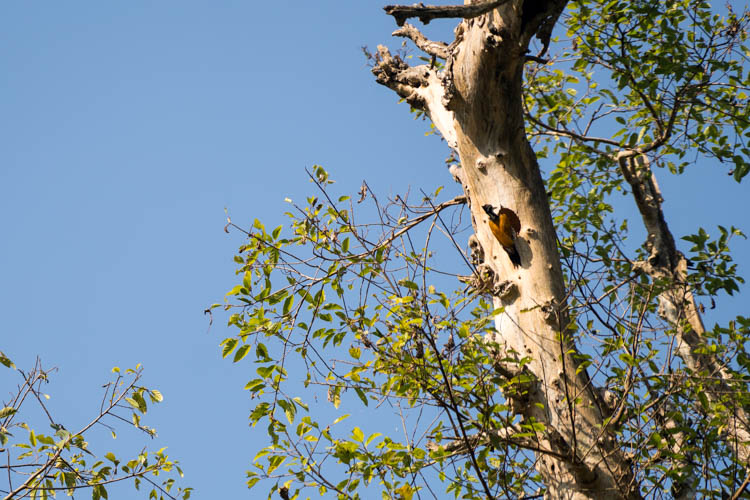 Can you spot the cute woodpecker?! 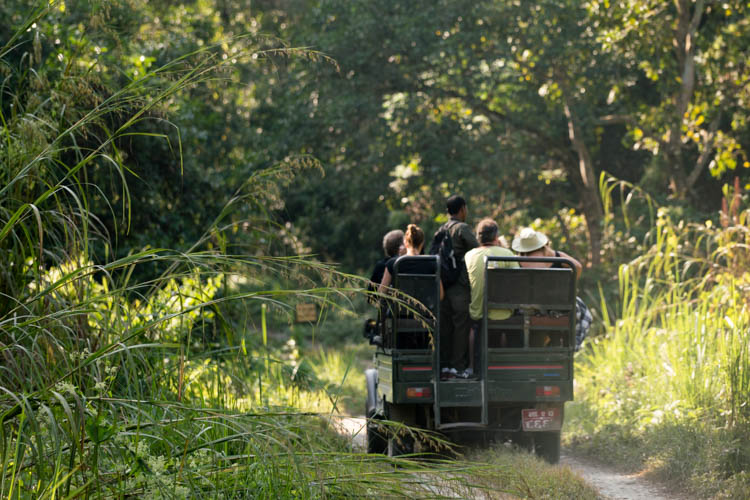 It was our first time going on such a jeep safari tour, so we weren’t sure what to expect. But honestly, 4-5 hours sitting in a bumpy jeep, moving at less than 20km/h while trying to spot wildlife, isn’t the most exciting thing actually. In fact after like 2 hours, we got a little sleepy. Maybe it was because there wasn’t thatttt much wildlife. We did see 2 rhinos, monkeys, wild boars, deer and some cute birds. 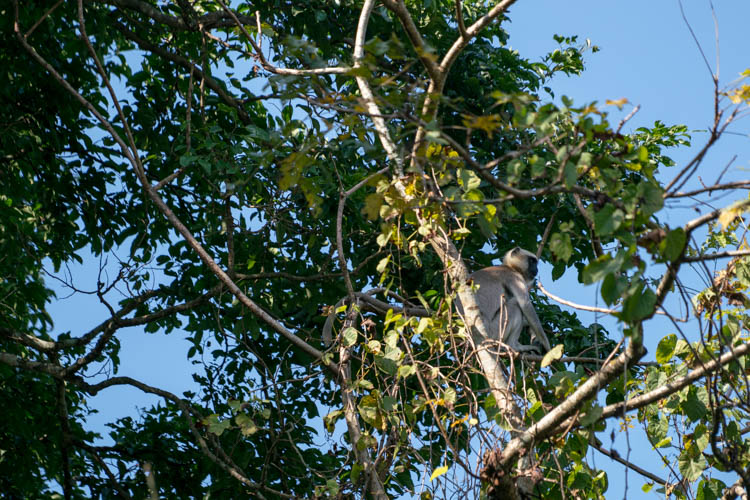 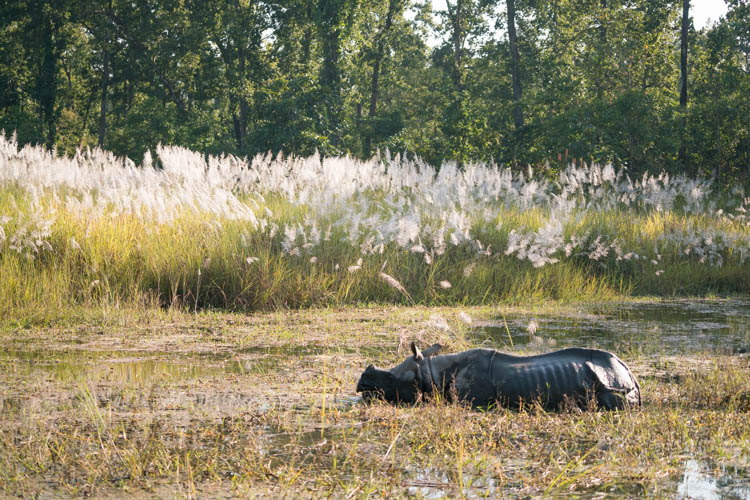 Rhino cooling himself off

Part of the safari tour will also include a visit to the crocodile farm but it wasn’t a very pleasant experience though. The crocodile enclosures were not well maintained and there was moss growing everywhere! The toilet there was also……one of the worst we’ve been to. And trust us, we’ve been to really terrible toilets during our past backpacking trips! 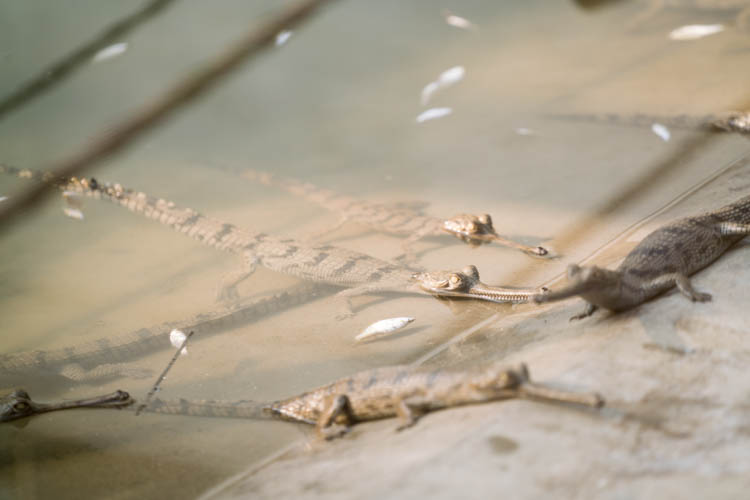 So, we really do love Chitwan, but one thing that we didn’t support was the elephant rides in the park. 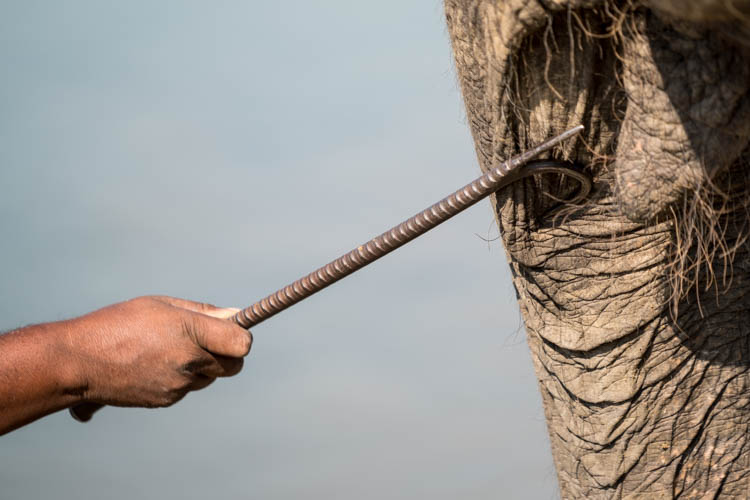 A very painful and heartbreaking sight 🙁

Each of these trainers/caretakers was holding a metal rod with a curved sharp end which he will then use to prod and hurt the elephant in order to get it to follow his bidding.

Some people say that the elephant skin is very thick and that’s precisely why these trainers hit really hard with their metal rod till it hurts the elephant! 🙁 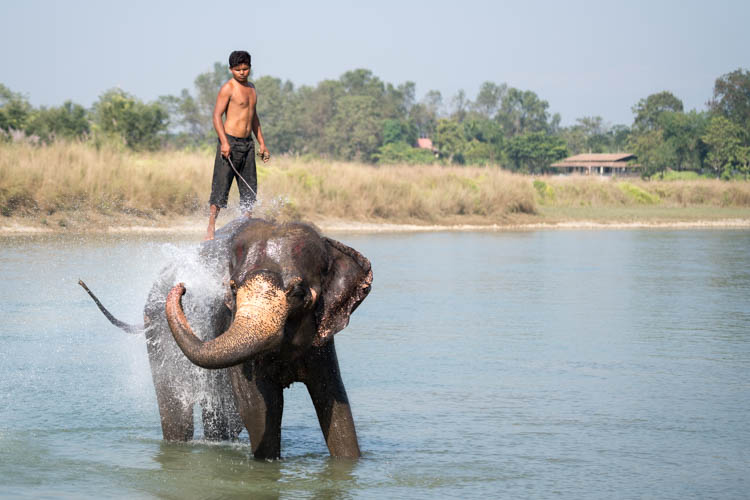 Jumping non-stop on the elephant to get it to “bathe” itself.

Tourists can pay a small fee to bathe with the elephants, which is essentially just the tourist sitting on the elephant and getting splashed by it.

Please, the elephant don’t even bathe that way normally. We saw this elephant at the other side of the river happily bathing on its own and he was just soaking himself in the water entirely, rolling from side to side. 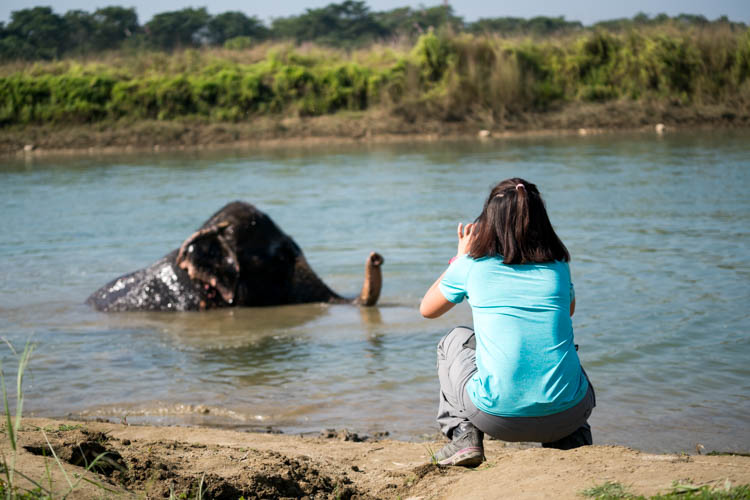 If you’ve gotten bored of the Himalayan view and have time to spare, why not! It was quite refreshing to soak ourselves in a jungle atmosphere after 2 weeks of being in the mountains. But don’t get your hopes too high to spot any of the rare animals like tiger. Our guide did say though that chances are higher during spring (Feb/March) when the grass is less dense and shorter. We were there during October (autumn) and the grass was really thick! It was harder to spot the wildlife actually.

Where we stayed in Chitwan National Park

Jungle Safari Lodge, S$57 for a triple room.
Location was very good, walking distance to the river where we spotted the rhino.
The breakfast here is awesome! We also did the above safari tours with them.

Don’t get mixed up, there’s another hotel named Jungle Safari Resort. We stayed at the “Lodge”, not “Resort”. 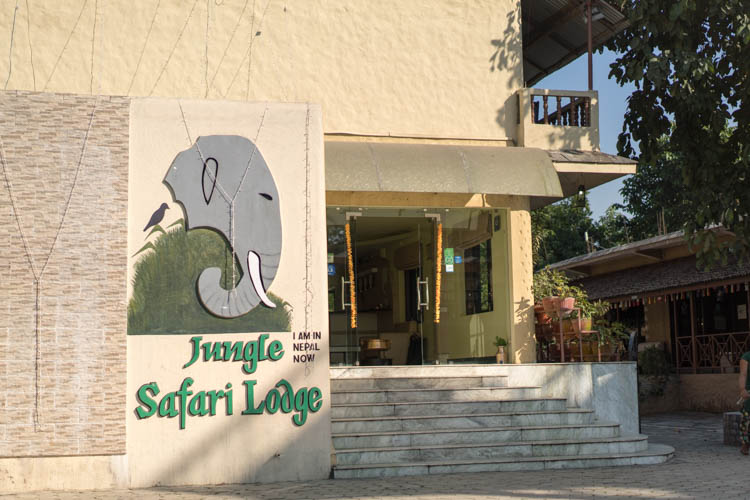 Our accommodation at Chitwan National Park 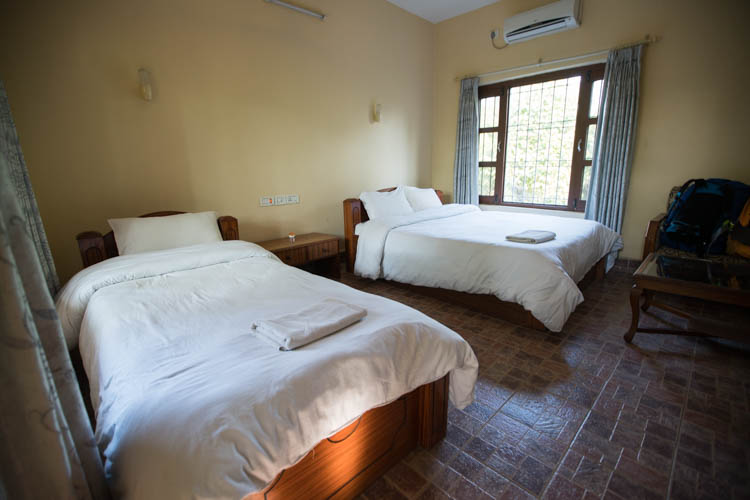 How we got here to Chitwan National Park from Kathmandu

Take a bus from Kathmandu’s  to Sauhara, ticket costs 600rupees per pax. The bus journey took around 7 hours.

Tip: If you’re planning on taking a local bus from Kathmandu, do inform the hotel in advance as they will be able to pick you up from the bus terminal.

Have you been to Chitwan National Park before? Would you recommend others to visit this place? Share with us your view in the comments below! 🙂

6 Awesome Ways To Get The Most Out Of Nepal

Our recommendation on things to do in Nepal to fully maximise your experience here!