Things to do in Isfahan – Our favourite city in Iran

There are so many beautiful places in Iran, but Isfahan wins the place in both our hearts. There’s just something so magical and sublime about this mesmerising city. From the mosques’ intricately painted mosaic pieces, the bustling historic bazaar to the picturesque bridges and central square, we were held spellbound for the entire time that we were there. Here are our suggestions on amazing things to do in Isfahan!

If you look closely at the building behind us in the photo,  you can see some long slender columns holding up the ceiling and the pavilion. There are actually 20 of those columns. Interestingly, the name “Chehel Sotun’ means 40 pillars and the reasons being the reflection of the pillars in the long pool in front of the pavilion. 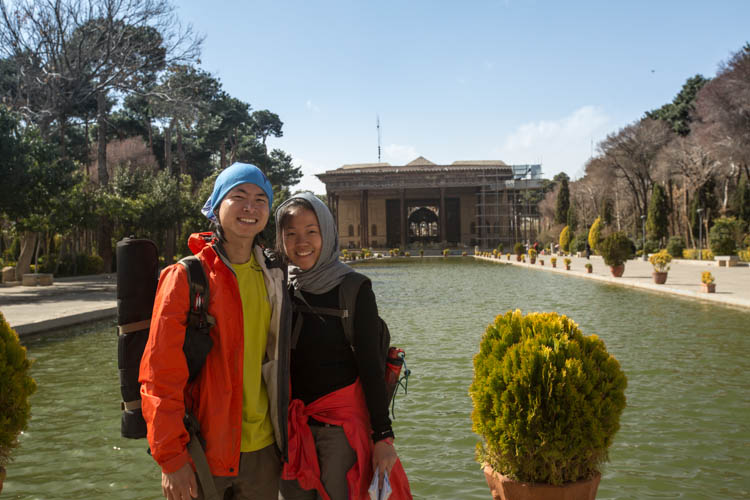 At the grand Chehel Sotun Palace of Isfahan!

The entrance of the Great Hall (Throne Hall) cannot be grander than this. Look at it, entirely covered with shiny gold reflective mirrors! It was so beautiful! 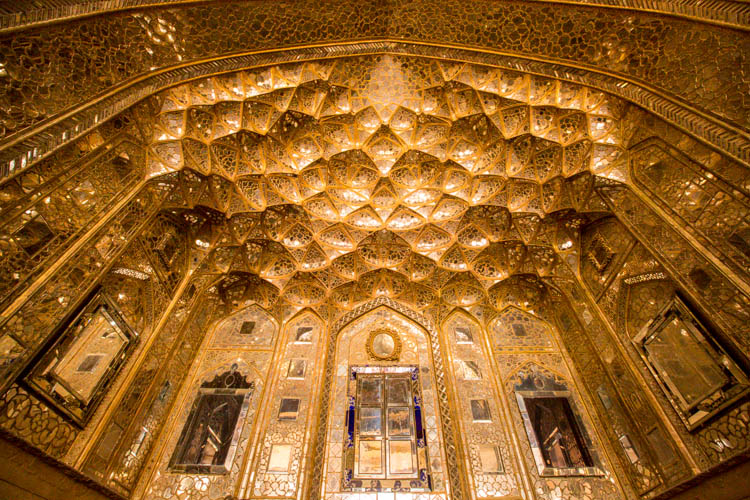 Wait till you see the inside of the Great Hall, we were blown away by the historical colourful frescoes that depict stories of the court life and past battle glories. 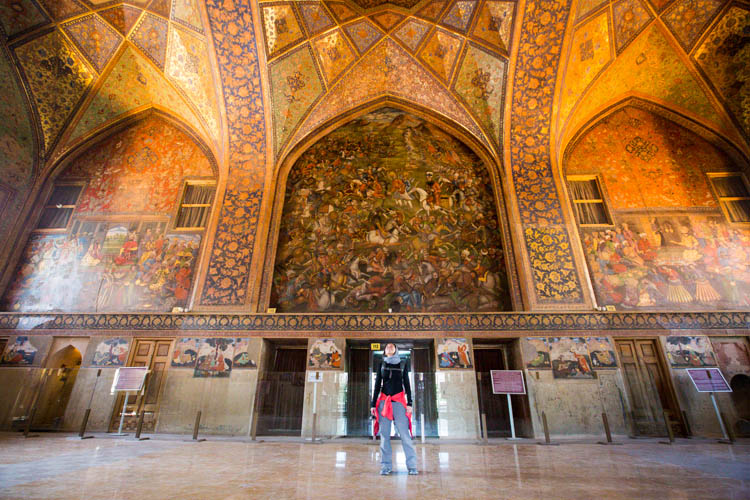 Mesmerised by the beautiful array of frescoes inside the Great Hall of the Chehel Sotun Palace.

This square, has got to be one of the most beautiful squares in the world! Naqsh-e Jahan actually means ‘pattern of the world’ and this picturesque place definitely give full credits to its name! All 4 sides of the square were impressive in their own ways and you definitely have to dedicate at least 1 full day to exploring this awesome place! This square is also the second largest in the world (after Beijing’s Tiananmen Sq).

Tip: Visit this beautiful square twice. At night, the entire place transforms into a totally different place! Also, the fountains only turned on at night, we’re not sure why either. 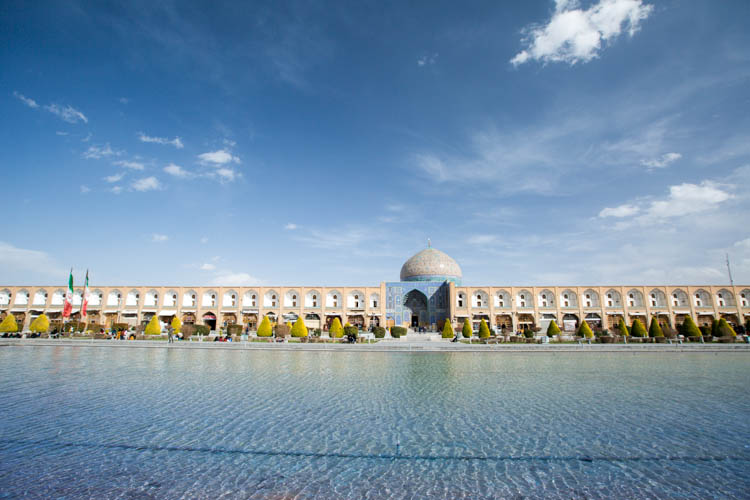 The majestic and tranquil Naqsh-e Jahan square of Isfahan 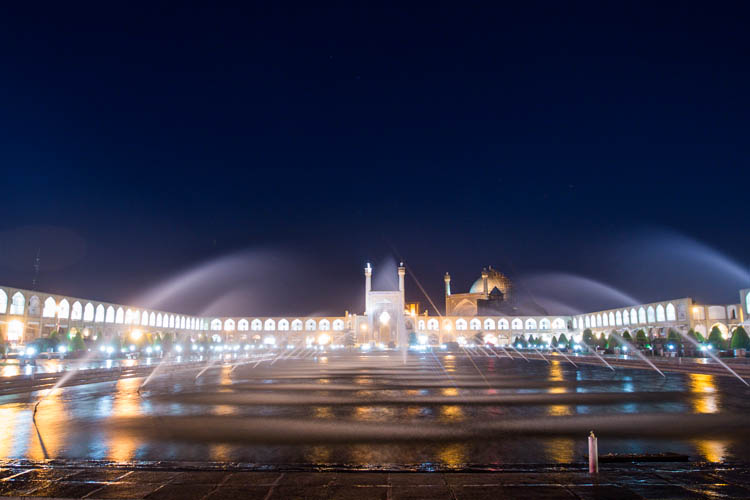 This has got to be one of the most interesting mosques that we’ve ever been to, albeit it being very small and unusual (without the usual capacious courtyards or minarets) The reason being that this mosque was meant to be a private worship place for the royal family. The entire mosque is made up of a hallway that leads to the main prayer hall and a study at the basement of the building. 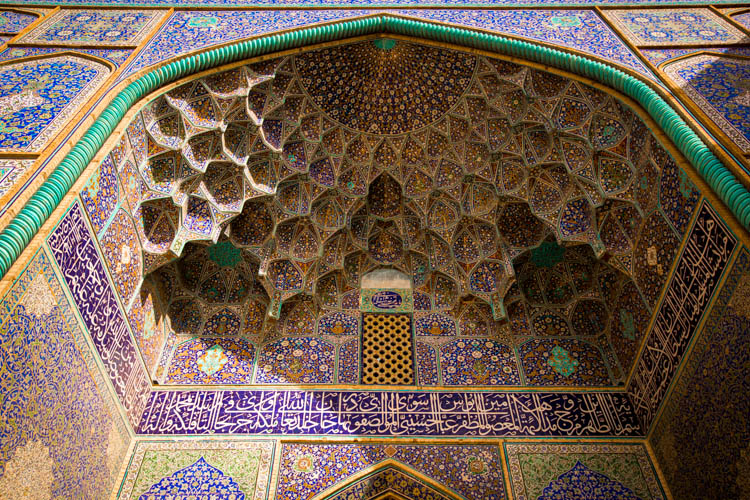 The interior of the Masjed-e Sheikh Lotfollah is being lit up by the sun rays that shine through the latticed windows, there are no artificial lights at all inside the mosque. 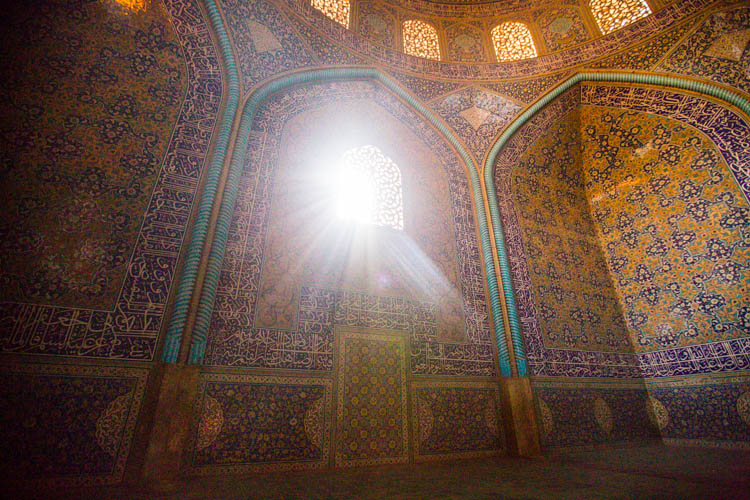 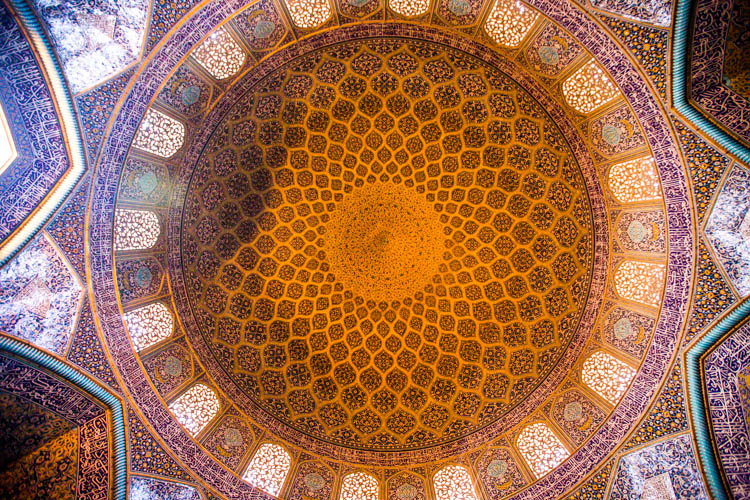 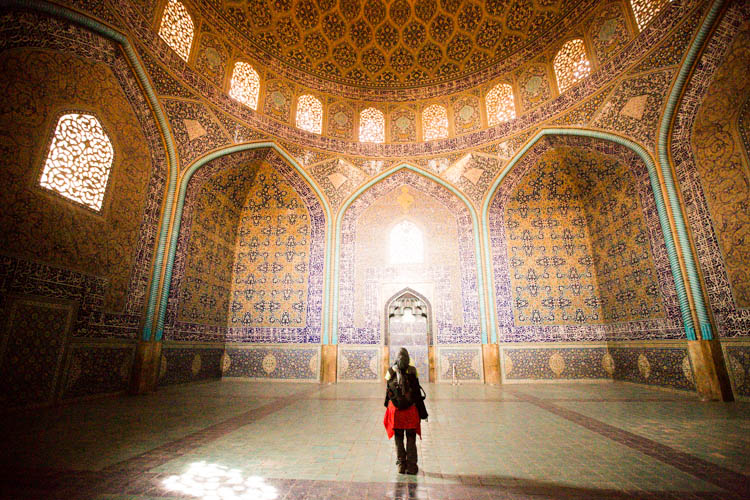 And for those that have been to Iran and used the Lonely Planet guide to get around, ever wondered why this place looked so familiar? Welllllll….cos it’s where the cover photo was taken at! Check out the photo on the right below! 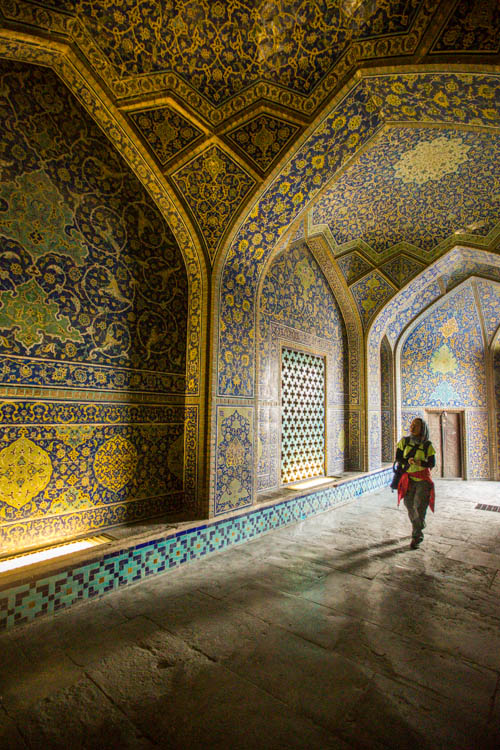 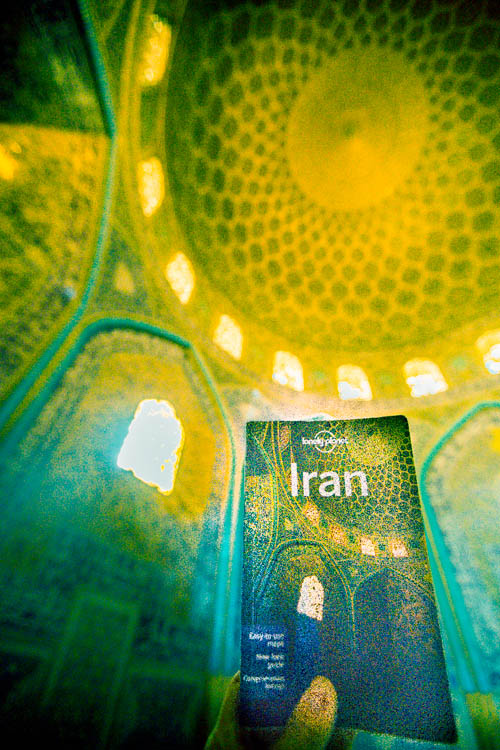 Another sublime example of the splendid architectural talent of the skilled artists in the 16th century. Check out the geometric symmetry of the patterned mosaic tiles! Each individual mosaic piece was hand painted and then carefully pieced together to form this perfect masterpiece. 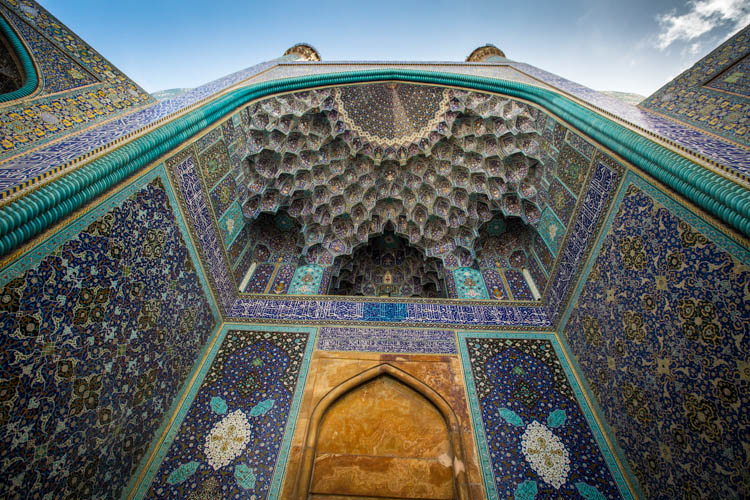 The majestic entrance of Masjed-e Shah 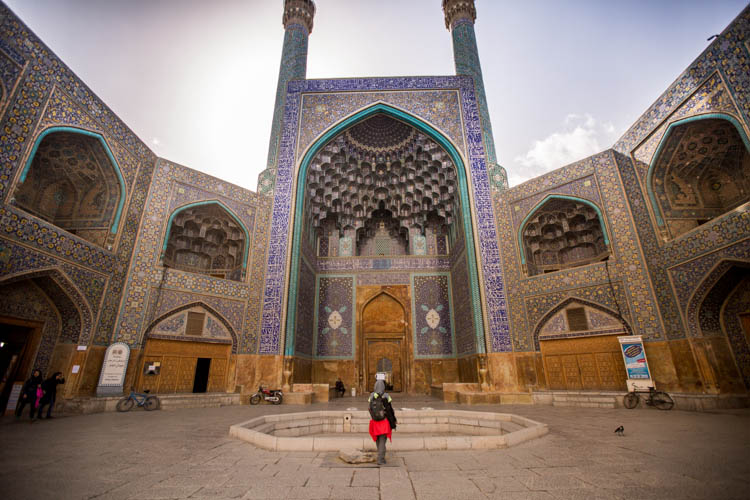 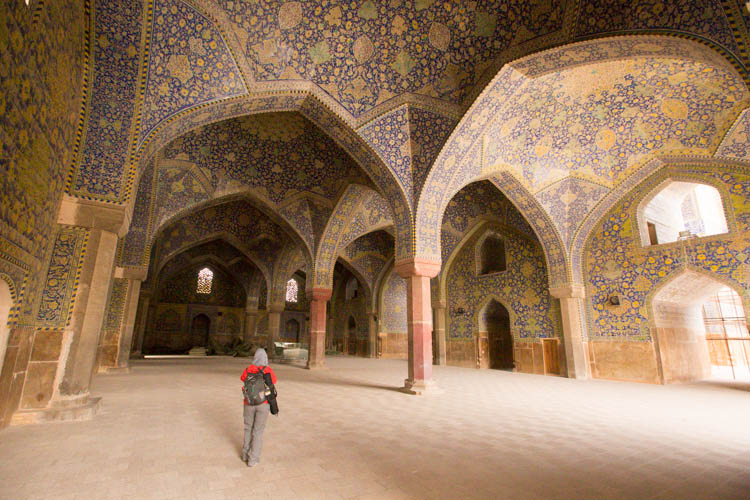 We have been to a million and one bazaars since we started on our 9 months Footprints Across Asia travel but this particular bazaar in Isfahan has been one of our favourites so far! The setting of the bazaar in the beautiful courtyard alleys, the wide array of souvenirs, carpet products (I bought a carpet backpack from here!) and a million other random things! 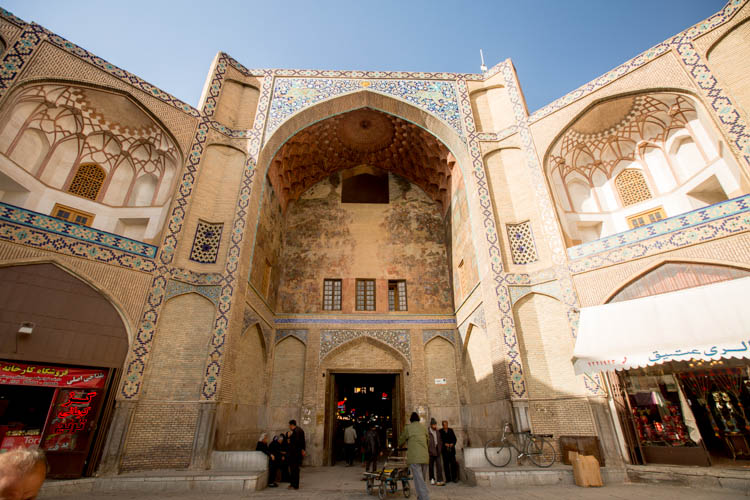 Qeysarieh Portal – the entrance to the bazaar 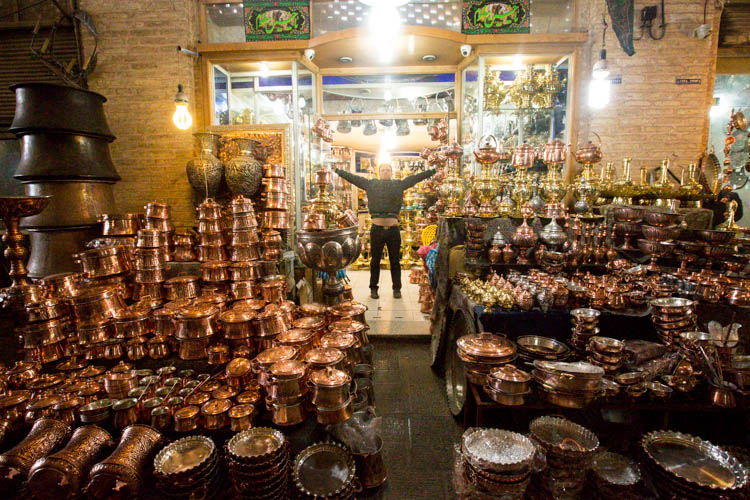 The “copper tin man” of the Grand Bazaar in Isfahan!

The Jameh mosque is one of the biggest and oldest surviving mosques in Iran. This mosque is not located at the square and it’s located quite a distance from it. You can walk via the bazaar to get to the Jameh Mosque, it’s definitely worth the effort! 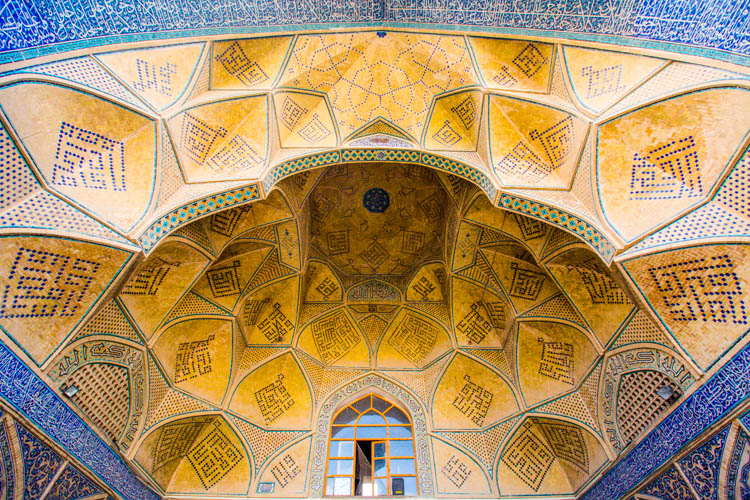 The ablutions fountain in the middle of the courtyard was designed to imitate the kaaba at Mecca. Devotees come here to practise their rituals before heading for their pilgrimage at Mecca. 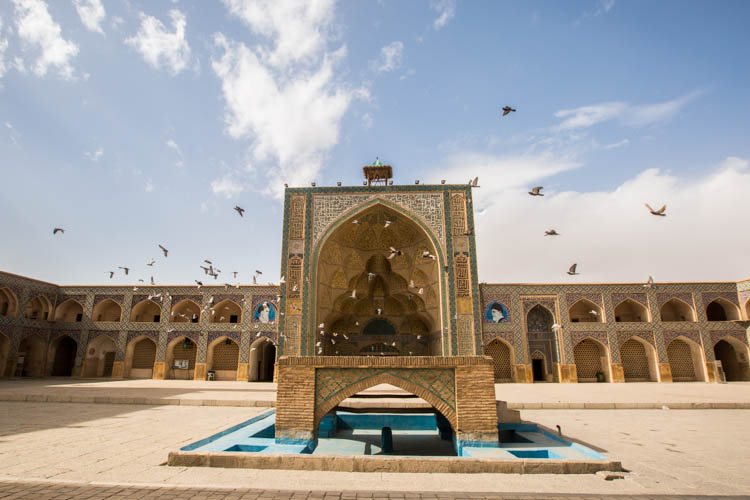 Captivated by the detailed brickwork of the Taj al-Molk Dome, one of the finest brick dome ever built in Persia. This dome might be small, but it’s said to be extremely hardy and has survived numerous earthquakes for the past 900 years! Also, the placement of every single brick is said to be mathematically perfect! 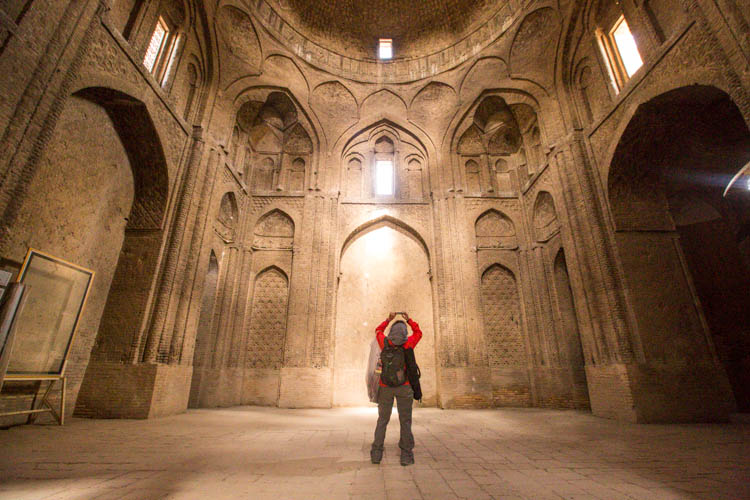 Impressed by the mathematically perfect and sturdy Taj al-Molk Dome 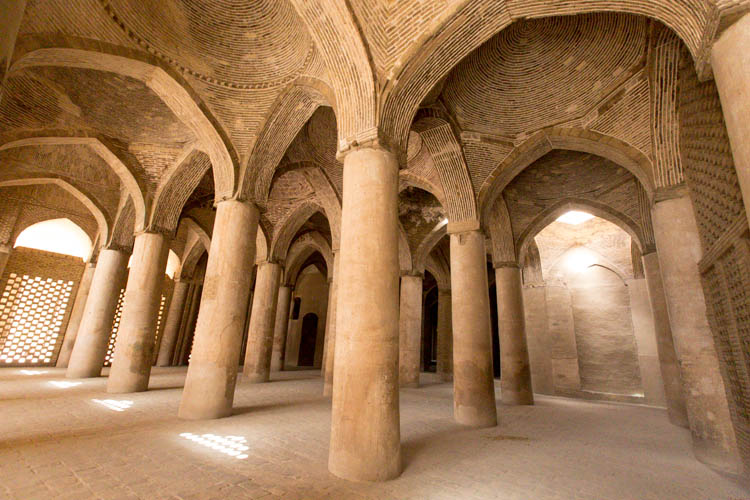 This Armenian cathedral is quite a far walk from the main city centre though, but we highly recommend it! The beautifully painted frescoes inside of the cathedral certainly made the walk worth while! It’s also in the same direction as the Pol-e si-i-seh bridge so you can visit both attractions in the same day. 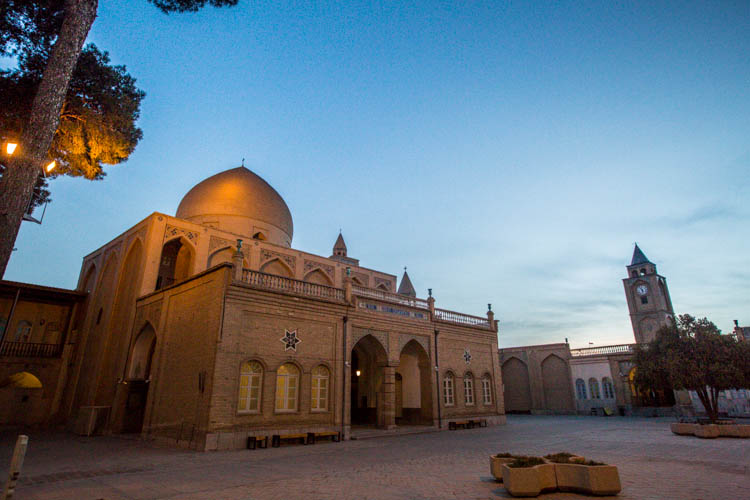 Exterior of the Vank Cathedral, looks simple but wait till you enter it, you will be amazed! 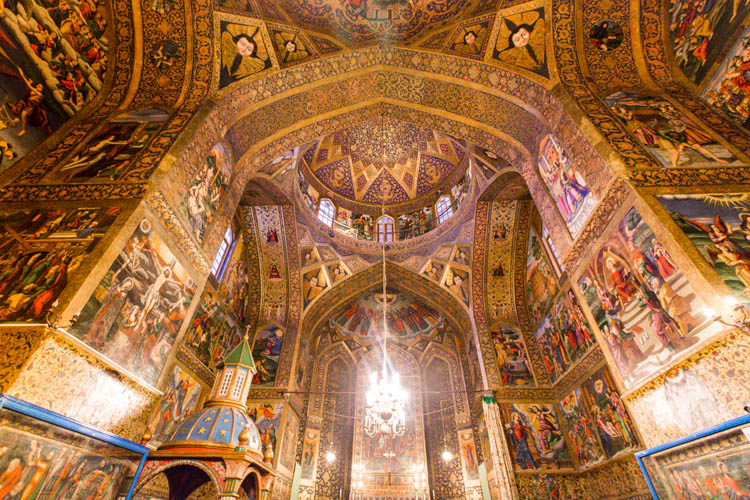 And here it is, the stunning frescoes on the walls inside of Vank Cathedral!

This used to be one of the most beautiful bridges in the world but it has since become a bridge over troubled water. Ok joke aside, to provide more water for in the increasing population in Isfahan, the government built a dam which resulted in the diminishing water supply on the other side of the bridge. Even from the photo below, if you look closely, you can actually see the river bed, that’s how shallow it is! 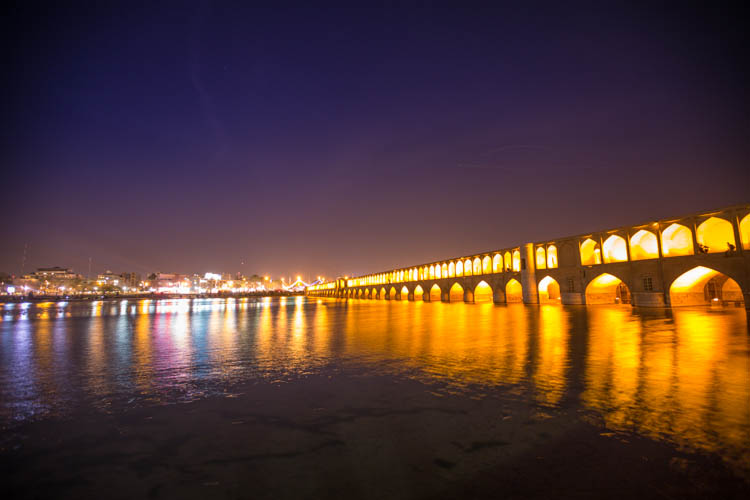 Isfahan’s really pretty amazing huh? Now you understand why it has become one of our favourite cities in Iran?

Where we stayed
Amir Kabir Hostel
250,000 Rial (US$8) for a single dorm bed (3 beds in 1 room)
With breakfast, wifi (reception area only), shared toilets

Cons
Very small room, crammed with 3 beds
No toilet in the room, shared toilet not very clean
Simple breakfast
Wifi available only in the reception area.

Have you been to Iran before? Which city is your favourite? Share with us your views by commenting below! 🙂 Also if you’re heading to Shiraz, do check out our post on Things to do in Shiraz – the land of poetry, nightingales, wine & flowers

« Things to do in Shiraz – the land of poetry, nightingales, wine & flowers » Our 6 Essential Items for Camping