The Ultimate Drone For Travelling

Shot in Sabah, Malaysia. There was a crack on the lens, which resulted in a less sharp image. Check out our video at the bottom of the post for a clearer video after the lens was repaired!

Drone videography and photography is definitely going to be the next big thing. It provides a truly different perspective from what we are used to compared to images taken from the ground. Having a drone provides a refreshing new angle, taking us to places we cannot reach, or too dangerous to do so.

What we would really love for our drone for travelling

In order to travel with a drone, most importantly it has to be light and not bulky. I guess that’s really one of the main features that we look out for in a drone that we can bring for our travels. Weight plays a huge part in travelling, and I am in a constant battle with the weight of my equipment versus its usability. Being able to fit inside my backpack would be ideal.

Secondly it has to be resilient enough to withstand the elements of travel, which includes harsh weather conditions, strong winds or even snow. It would be good if it is waterproof and of course, survive being crushed inside my backpack. A long battery life is necessary. Not needing to charge the battery every now and then, especially during multi-day hikes. Fast deployment of the drone is important too. Our travels are not part of an intensive production house size plan, and most of the time, we hardly know what to expect next. Thus it has to be able to just pop out of the bag and ready to fly in seconds. Lastly, I guess it wouldn’t hurt for it to have good camera specifications. Since I usually shoot my travel videos with a DSLR, being able to match up with the video quality would be a bonus! 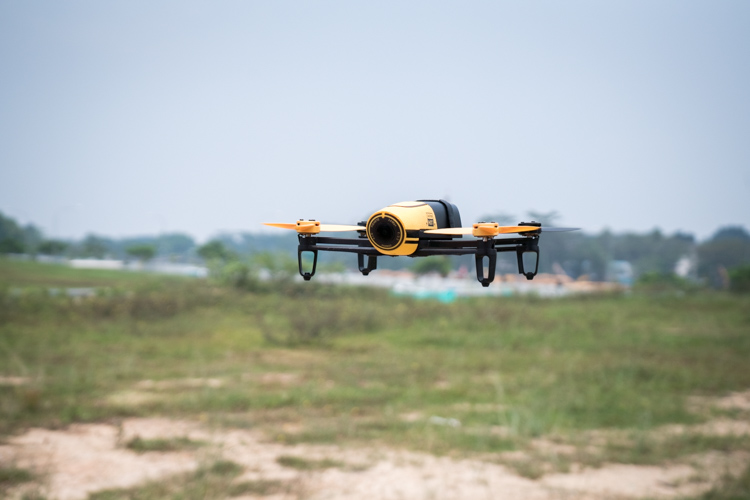 So we had the opportunity to lay our hands on the Parrot Bebop Drone, our first ever drone!!! Yes it was really exciting for us! Being able to record our travels in a totally new perspective. The Bebop is super light weight, the drone itself weighs only 500 grams! It comes with an optional remote controller, which boosts the flying range of the drone to up to 2KM. The downside to that is that it weighs around 1.5kg which is surprisingly huge, almost twice the size of the drone itself. Parrot supports its drones with mobile and tablet apps, meaning you can fly the drone straight from your phone. 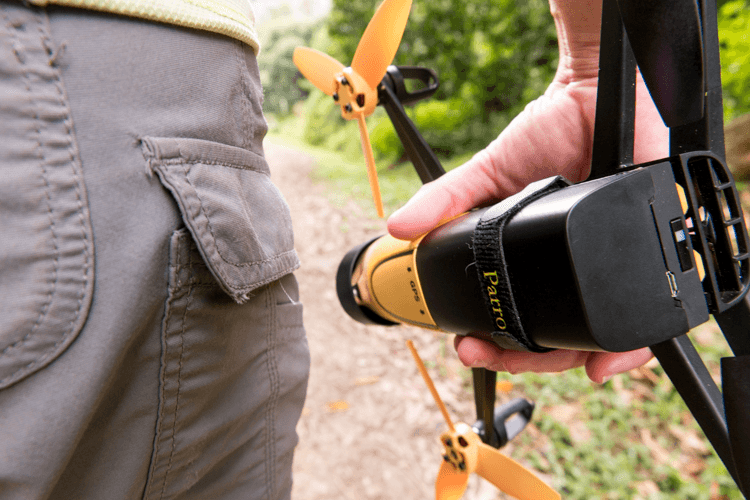 Packing the drone was a challenge. The drone itself was really small and portable, but it is the remote that seriously fills up the space. Why is the remote necessary? More on that later. We took the risk and packed it in our backpack, covering and cushioning it with clothing, hoping it would survive the flight and other rigorous activities. Well surprisingly, it survived well! 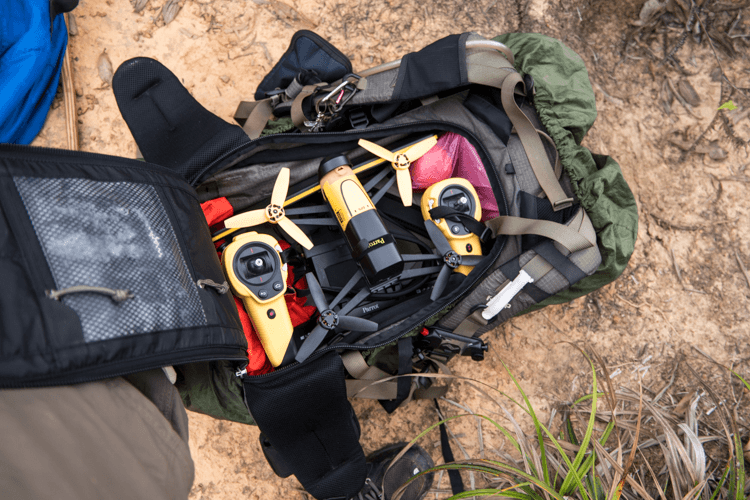 The controller took up most of the space in my backpack and it’s almost twice the size of the Bebop. Also I chose to pack the drone in with the wings attached, so that it can be deployed quickly.

Flying the drone for the first time was to be honest, scary as hell. Just try to imagine flying a laptop around. Just one wrong move and you could send your drone crashing into a tree, a wall or straight into the water. I probably had 50 over hours of practice flights at home before I was confident enough to bring it out for our travels. I was unfortunate enough to crash it into a wall while practicing, scratching the very vulnerable protruding lens of the Bebop, and had to send it back for repair 🙁 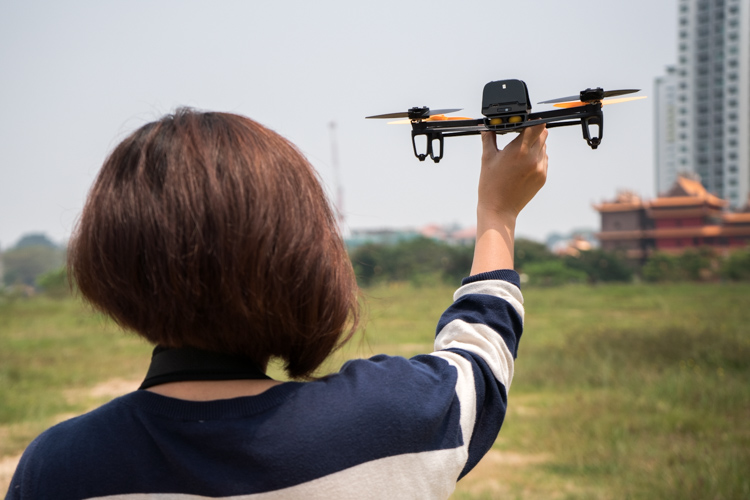 Starting up the drone was easy and intuitive for first timers, having the confidence in the drone was another thing. I had the drone lost connection with the remote before, and that feeling was heart-stopping frightening. The built of the drone, even though light, was actually pretty sturdy. I had the drone fall a hundred meters down from the sky (when it lost connection) and surprisingly it escaped unscathed! Also I had to risk my life to climb a rather tall tree in Australia because it crashed into one and got stuck at the canopy. #droneproblems

“The built of the drone, even though light, was pretty sturdy, and I had the drone fall from a hundred meters down from the sky, surprisingly without any damage.”

In our first drone video flown in Sabah, I had it fly through dense jungle terrain, over rivers and towards a gushing waterfall. Pretty scary stuff! Having the drone safely back in your hands after a flight, feels somewhat similar to surviving a risky cliff dive! Having the remote with us was necessary after several tests of flying using Parrot’s app via my phone. Flying the drone using only the phone meant that the drone is dependant solely on the Wifi signal from the phone. It is just not enough for longer distance flights, which resulted in laggy feedbacks (especially crucial if you cannot physically see the drone when it’s lost high up in the sky). 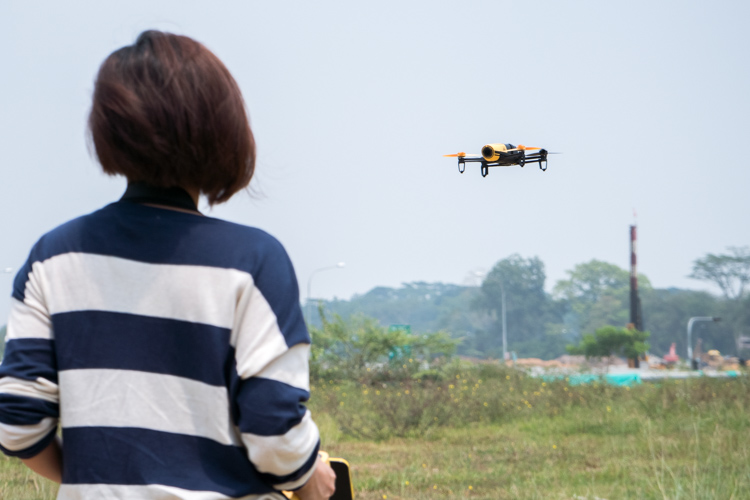 Wind plays a huge part on flying the Bebop. The light weight of the Bebop means it is very susceptible to strong wind. And it is through experience (of crashing) that you get to tell when it is suitable for flight. Their website states that it can handle wind speed up to 40km/hr.

The built in GPS system allows the drone to fly back to the starting location, which is really useful if you happen to lose sight of it, or in an emergency!

So far we had no issues with the authority for flying the drone, just many curious onlookers, but there are more and more country specific drone flying rules appearing recently, and it is always important to know them before you fly it. You don’t want to get into unnecessary trouble in a foreign country.

Oh and Bebop’s flight App has an in-app purchase called Flight Plan. This allows you to pre-program way before you even take it out, plan it’s route, and then let it fly without even touching any controls. A pretty cool experience really! 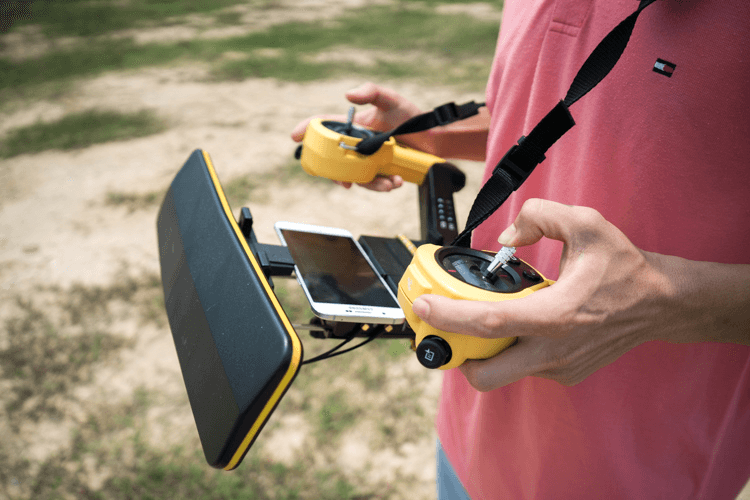 With Parrot’s Sky Controller and my phone as the screen

The Parrot Bebop uses an inbuilt camera system which has its pros and cons. The good thing is that it does not rely on an external gimbal system, and does its image stabilisation internally. Being able to rotate and tilt the camera around within the drone allows much freedom and creative shots while flying the drone. The remote really helped with the controls and rotating the camera angle on the drone was possible using the same remote even though it takes great skills and high level multitasking abilities to achieve it. The Bebop shoots in 1080p HD using a wide angle lens.

“Being able to rotate and tilt the camera around within the drone allows much freedom and creative shots while flying the drone.”

We had the chance to fly the drone from within the car in our Australia road trip and boy it was challenging, but fun! Being able to tell Gina (driving) to speed up or slow down the car, was really useful for the video. Lots of strong winds in Australia, so we didn’t had much chance to fly it. 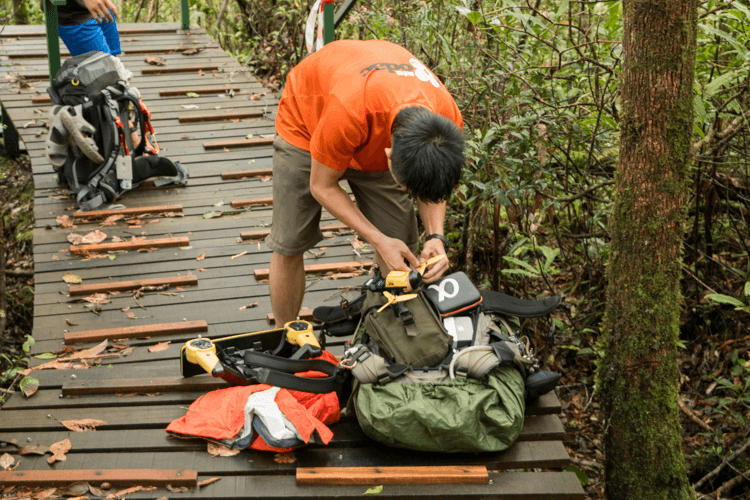 Fixing up the wings of the Bebop 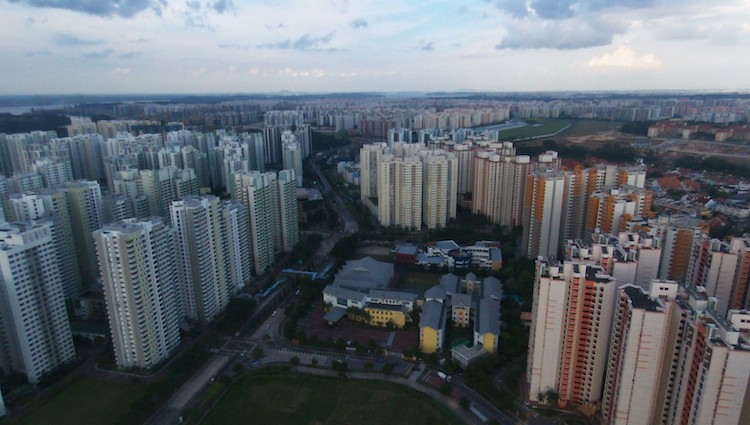 View from above by the Bebop

So was travelling with the Parrot Bebop worth all the hassle? Well, we haven’t really traveled with the drone for long distance or multi-months trips. But from our recent short trips, I would say that the images justify the hassle and it also depends on your travelling style. Ultimately the results would be based on the quality of the videos produced and whether it enriches the audience’s viewing experience? Well how about you be the judge and tell us. Check out our video and tell us what you think about travelling with a drone!

Why You Should Travel Off The Beaten Path In Turkey

Our experience on exploring the less beaten path of eastern Turkey. Find out what you're missing out on if you've...