Khiva (pronounced as “Hiva”), a city well known for its brutal history of being one of the most important slave trading markets of Central Asia, definitely took our breath away as we traipsed through its dark alleys and labyrinths of narrow streets. But fast forward to today, it is one of the world’s most beautiful ancient cities and it’s hard to imagine its daunting past. 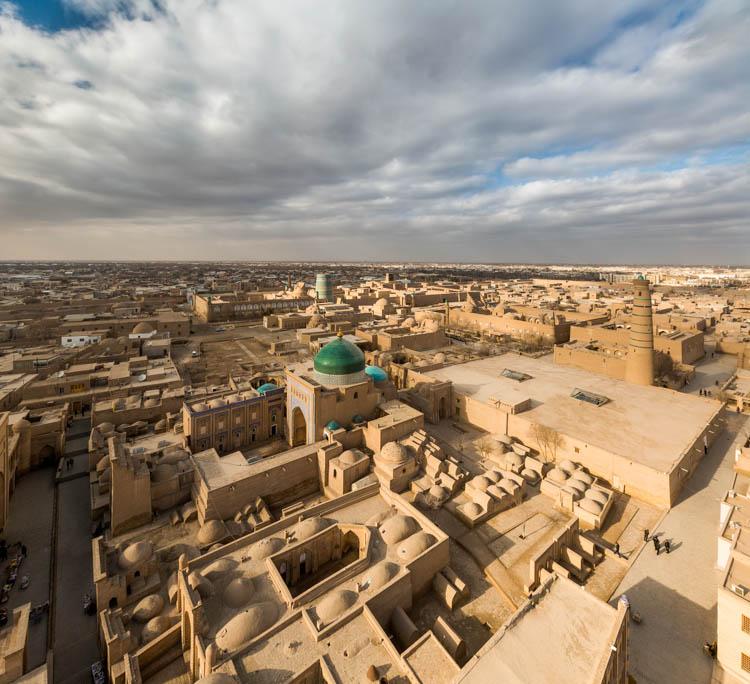 Due to its close proximity to the Karakum Desert in Turkmenistan, this city was often used as a trading market for slaves captured by the Turkmen tribesmen or Kazakh tribes from the steppes. This long passageway is at the East Gate of the Ichon-Qala where the slave market was held. See those niches in the walls, that was where the slaves used to be displayed for sale. 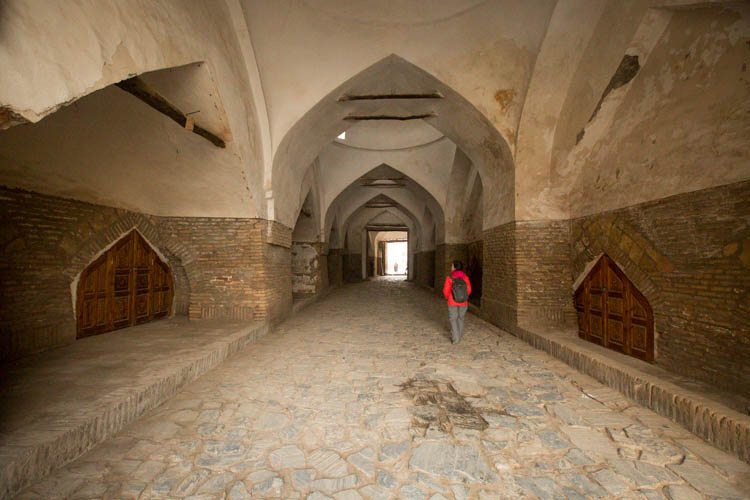 But behind its dark past, this city is also well renowned for its stunning architecture within the old walled city, Ichon-Qala, and some people would describe it as an “open-air museum”. As we walked through the streets of Ichon-Qala, it really did feel like we were starring in the famous story Aladdin or One Thousand and One Night. 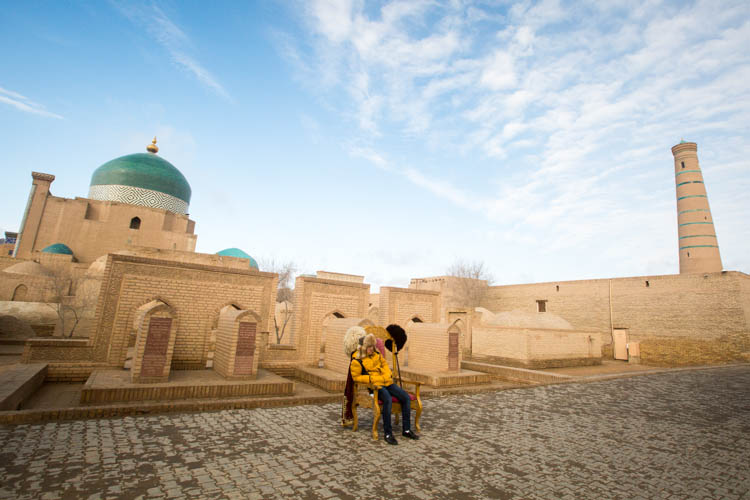 This place was quite commercialised though, with the numerous peddlers lined up along the narrow alleys, excitedly greeting us with “Ni hao!” (means how are you in Chinese) and at the same time trying to sell us some overpriced key chain, fridge magnet, lacquer ware or any other souvenirs. 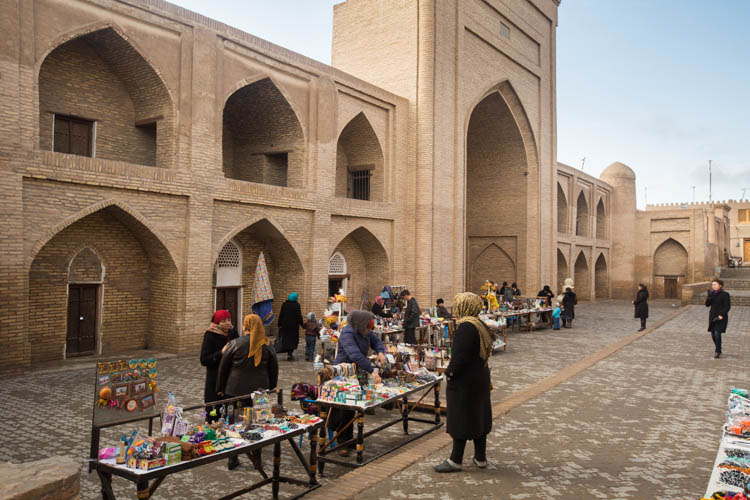 They even have several of such set ups (as shown in the photo below) where tourists can have their photos taken together with cute props against the photogenic buildings in the background. Some set ups were really ridiculous with a huge fake tiger as part of the set and props that included a large furry teddy bear with scary eyes. Not sure how these props complement the beautiful ancient city backdrop. 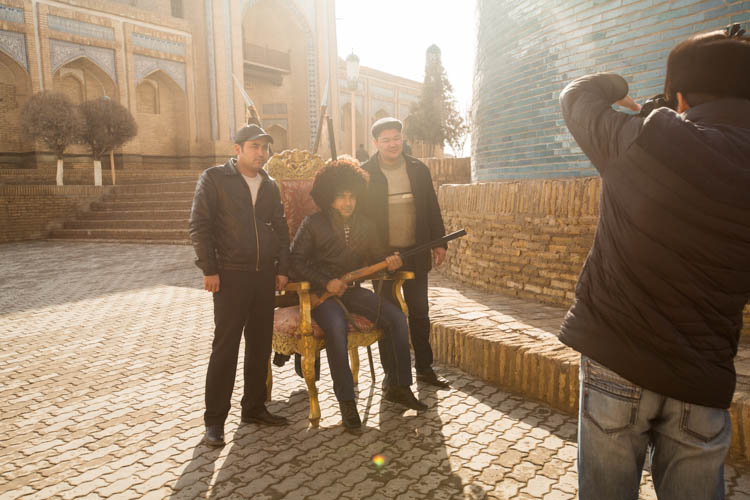 The absolutely stunning architecture of Juma Mosque took our breath away. Those intricately and beautifully carved pillars, 218 of them in total, actually support the roof of this mosque. 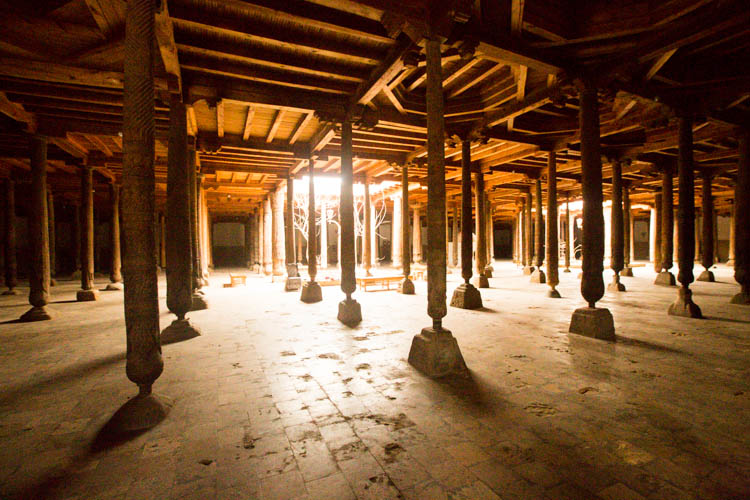 Another one of the interesting sights of this picturesque city is its Minarets, Kalta Minor Minaret and the Islom-Hoja Medressa’s Minaret. The stumpy minaret on the left was constructed halfway when Mohammed Amin Khan, who apparently wanted to build a tower so high that it could overlook Bukhara, suddenly passed away. So it was just left there behind, half constructed. 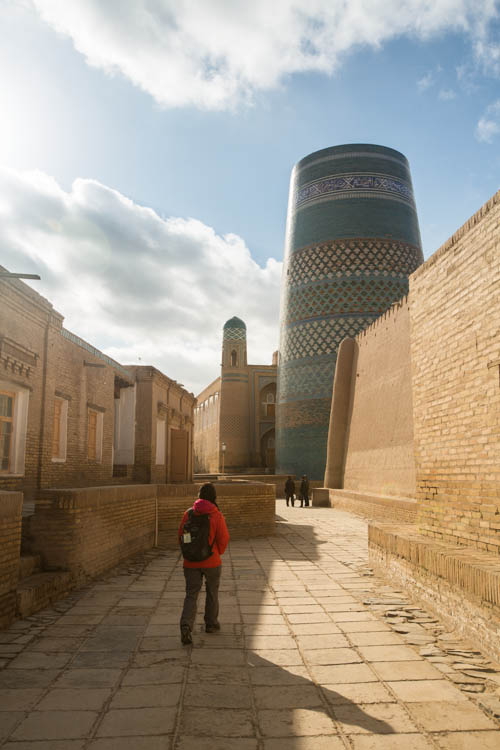 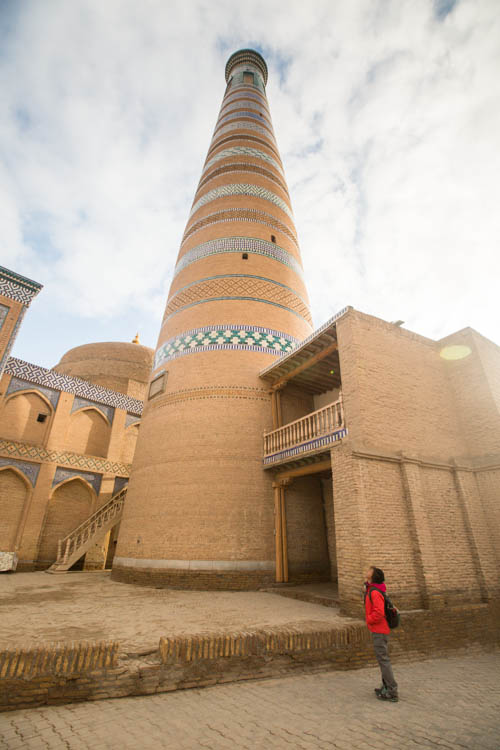 Tip: For the best view of Ichon-Qala, climb up to the top of the minaret of 57m height in Islom-Hoja Medressa. There’s a small fee of 4,000som (US$1.50) per person, 3,000som if you’re a student (they don’t check anyway). This view is better than from the top of the Kuhna Ark we feel. 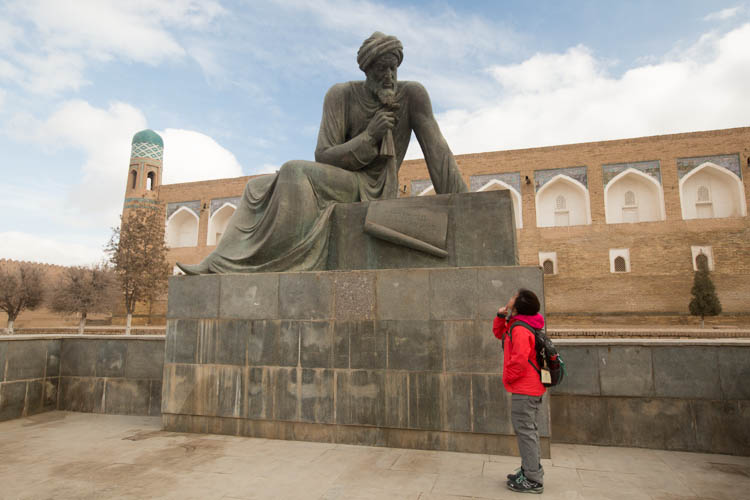 Al’Khwarizmi imparting some of his knowledge to Gina

Some sources claim that the best view of Khiva city is from the top of the Kuhna Ark. It’s subjective though, for us we preferred the view from the top of the 57m minaret where you get a bird eye’s view of the entire city. This fortress was built back in the 17th century for the Khans to live in. The main highlight of the ark would be its watch tower in our opinion. 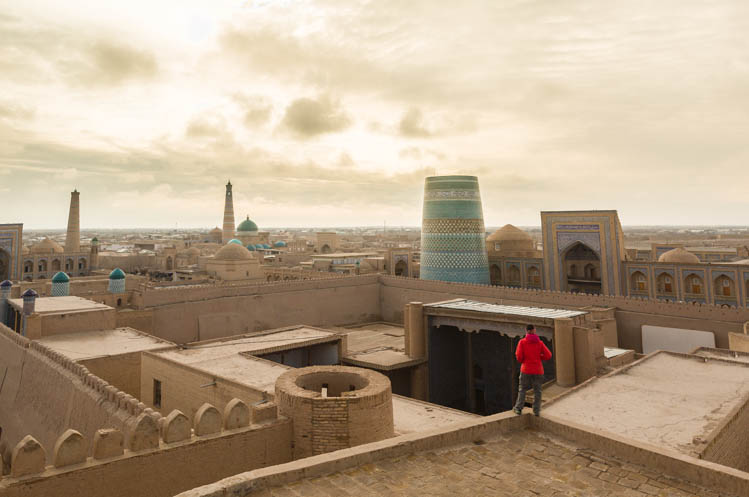 View from the top of the Kuhna Ark

We were exploring the inner walled city serendipitously when we chanced upon these 2 ladies who were making bread in the open! It was very interesting for us to witness the entire process as we’ve never seen how bread is being made in Central Asia before. The bread in Central Asia is really special, it’s usually huge (bigger than our faces), flat and round and also considered as holy and should be treated with utmost respect. It’s almost equivalent to the staple for the locals and they eat it for almost every meal! A local once told me, “no bread, no meal”. If you’ve been offered bread, you should always at least break off a small piece of it to eat even if you’re full. The bread should also always be placed on the table with the patterned side facing upwards and unfinished bread should never be thrown away in the street.

So basically, they will knead the dough and roll it into a nice large round shape and then proceed to slap it onto the inner side of the earth oven. 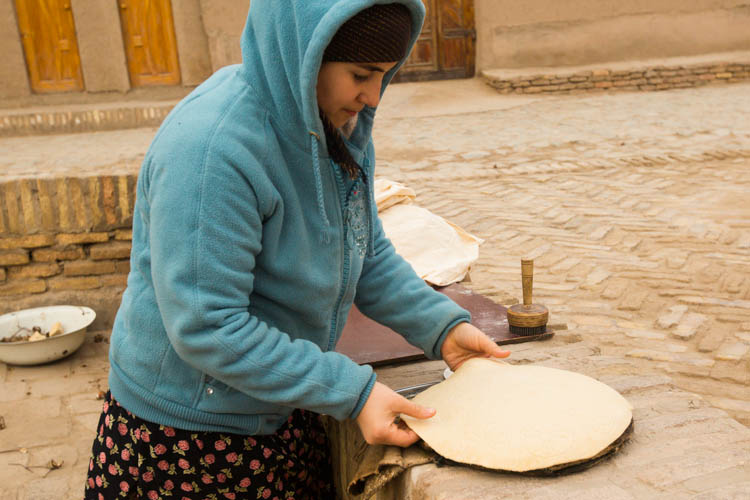 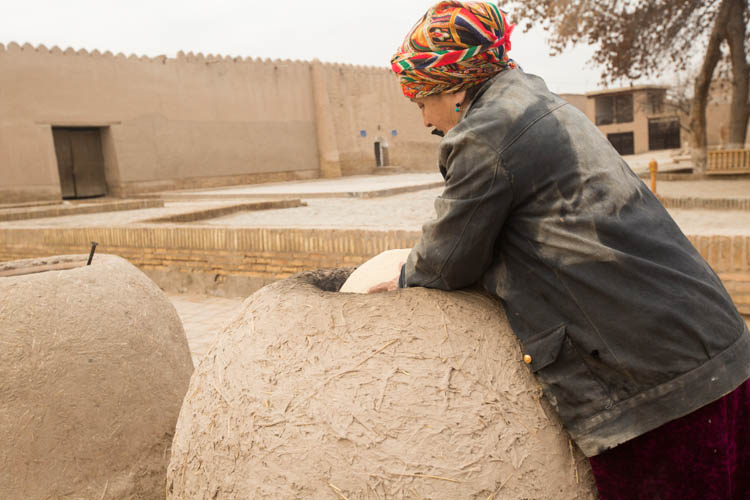 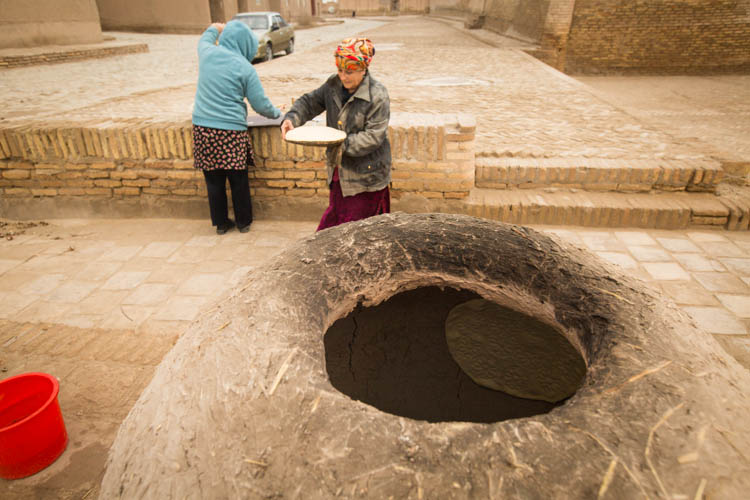 It only took around 5 minutes for the bread to be fully baked! And tadah! Here’s the end result, also she was very kind to give this bread to us for free! It was so satisfying eating the piping hot fresh bread baked right out of the oven! Best bread that we’ve ever tasted in Central Asia 🙂 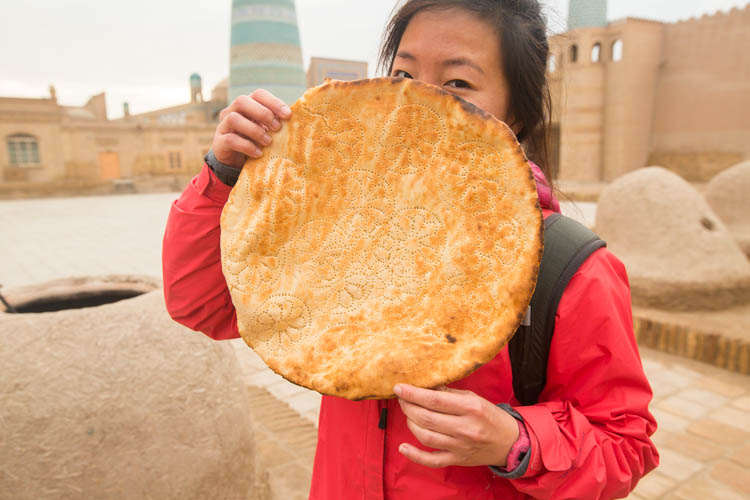 Another interesting encounter when roaming about the streets in Ichon-Qala was getting to witness the fanfare of the bride and groom parading down the streets together with their friends and relatives. We first heard some loud celebratory music playing from afar and quickly walked towards it to find out what the commotion was about. Somehow, the expression on the newly wed’s faces was bewildering, shouldn’t this affair be a joyous occasion? Why are they looking so dejected and grumpy? Maybe they had a very long day and were exhausted from all the attention. This was just one of the many couples that we spotted in Ichon-Qala (apparently it was very popular for wedding couples to celebrate here) and somehow, all of them were looking so depressed, just like the couple in the photo below. 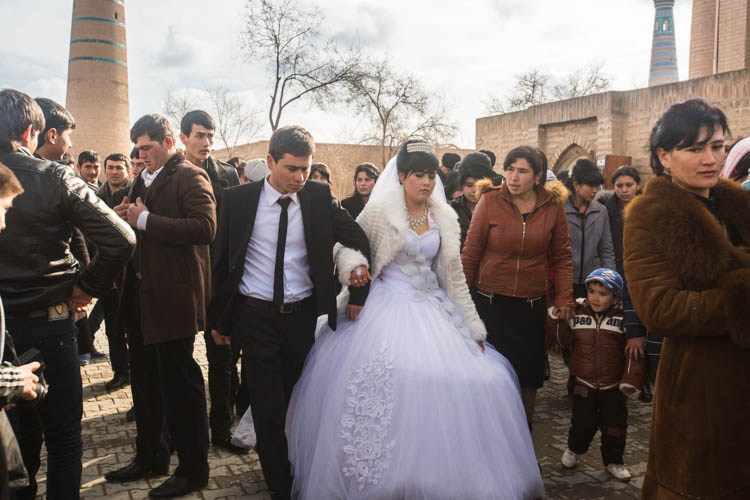 On the contrary, their friends and relatives seemed to be having the best time of their lives. They were dancing in such glee that they almost looked intoxicated in broad daylight! Maybe it was an attempt to cheer up the sad looking bride and groom. 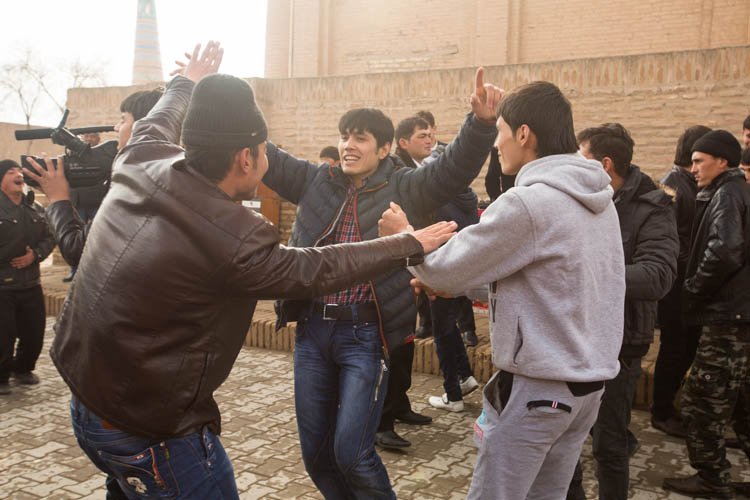 Having said all that, we definitely enjoyed our time here in beautiful ancient Khiva. Rich in history, photogenic old walled city and interesting people. We would recommend this place to anyone travelling to Uzbekistan!

Where we stayed
Meros B&B
cost: USD35 for a double room with breakfast, free wifi available too
Their breakfast was one of the best that we’ve ever been served in Central Asia! We really enjoyed it! Also while you’re staying there, do take some time to appreciate the beautiful ceiling that has been restored by the owner. Very good location too, located round the corner near the Khuna Ark. Highly recommended!

How much
Entrance fee to Ichon-Qala – 28,500som (USD$8)
One ticket grants you entry to almost all the sights in Ichon-Qala. Do note that you have to pay additional if you wish to go up the watch tower.

Where we ate
Outside of the Ichon-Qala
If you’re looking for affordable food, forget about any restaurant inside Ichon-Qala or directly outside it. Instead, take a walk out to the streets further away from Ichon-Qala and you’ll find that the prices drop by at least half! One plate of Laghman cost us only about 6,000som (US$1.50).

How we got here
You can take the trolley bus (green coloured bus with wires at the top of the bus) from the bazaar in Urgench.
Cost: 600som (USD0.10)

Have you been to Khiva before? What was your experience like? Share it with us in the comments below! Also, check out our experience in Samarkand-The Heart of the Great Silk Road and Bukhara-the holiest city in Uzbekistan.

Our First & Best Experience of Couch surfing in Iran

This was our first experience of couch surfing in Iran and it was one of the best that we’ve ever...