The Frozen Waterfall of Ala-Archa Kyrgyzstan

After our first winter trek at Kegeti Gorge, we were really excited for our next trek to Ala-Archa Kyrgyzstan, another famous highlight! We actually planned for a 2D1N trek to Ala-Archa and Ak-Sai where we supposed to sleep at the hut at 3300m. Unfortunately, we didn’t make it. Trekking through snow was sooooo challenging 🙁 It made the trek so much harder and we took double the time as compared to if it was in summer! That’s me and our guide, Misha, in front of me! 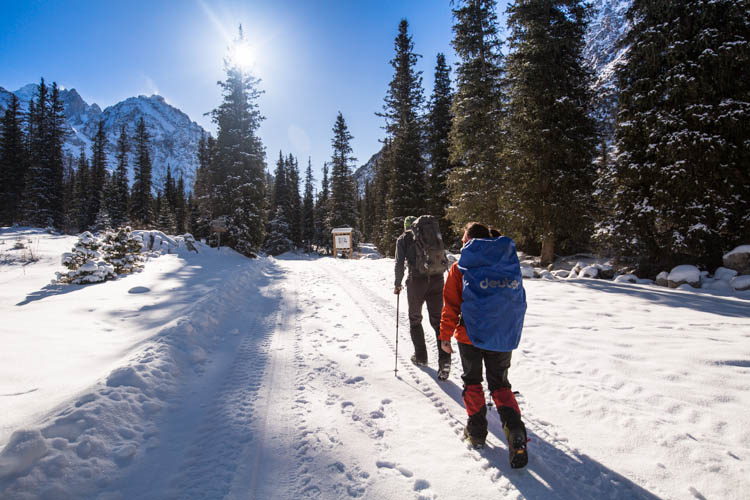 The day started out great! It was relatively warm (around 0 degrees) and sunny with clear blue skies! As compared to the past few days when it was mostly foggy and snowy with temperatures averaging around -10 degrees. So yes, Misha, also told us that we were really lucky to have such great weather for our trek 🙂 Here’s me looking all ready and raring to begin the trek! Looking kind of professional right? Thanks to our awesome local guide, Misha from Kyrgyzland, who helped prepared us for the trek by loaning us all the necessary gear. He loaned us the trekking pole, alpine boots (yes even shoes can be loaned!) and gaiters (a waterproof garment that you wear over your shoes and lower pants to prevent any snow from entering your shoes). He has all sort of equipment for rent and you just need to tell him what you’re lacking. 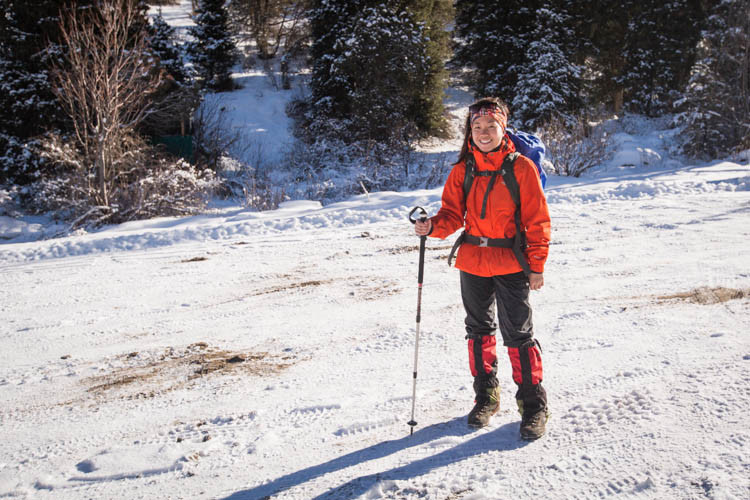 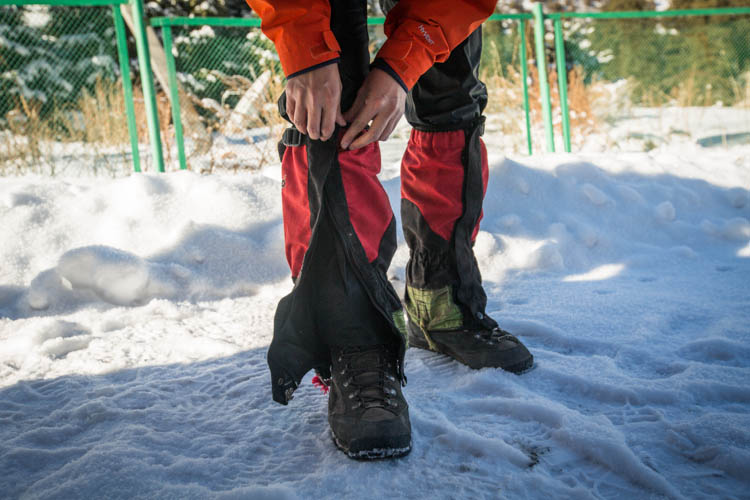 We started our trek around noon and to mentally prepare ourselves, we asked Misha what was the average amount of time needed to reach the hut and he told us around 3-5 hours. That sounded not too bad. Hence we were mentally prepared for a less demanding journey as we’ve definitely trekked longer distances in a day before. But boy were we so wrong…After 2 hours of trekking, we were not even anywhere near our halfway mark which was at the waterfall! The original plan was to stop at the waterfall for our lunch break. But we were so hungry after 2 hours of trekking, we decided to stop there and then to have our lunch break instead.

Tip: When packing a sandwich for lunch during your trek, avoid water logged vegetables such as tomatoes and cucumbers as well as putting too much sauce. This will reduce the chances of a soggy sandwich and also reduce its weight. If you are really a sauce person, pack the sauce separately and only add it into the sandwich when you’re ready to eat it. See that bag of white mushy stuff on my lap? That’s the egg mayo that we prepared to go with our sandwich. 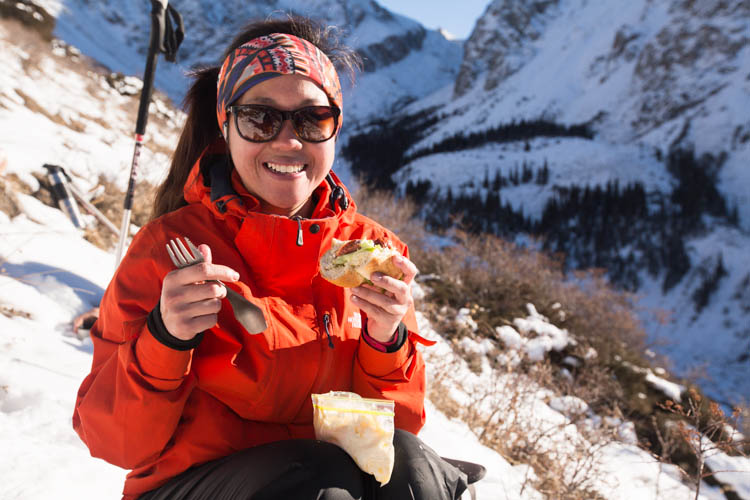 Trekking on snow was tough. But trekking on LOOSE snow was 10 times tougher! It snowed for the past few days which explained the fresh loose snow. It took a lot more effort to trek the same distance on snow as compared to normal ground. Our legs were already aching despite a gentle sloping terrain. Not forgetting that in the mountains it was much colder and our finger tips were almost turning blue albeit wearing waterproof gloves! Blood flow to our legs were compromised as well due to the muscles overworking and tensing up while trekking uphill on a loose snow terrain. Read here for tips on trekking on loose snow as well as preventing frost bite! 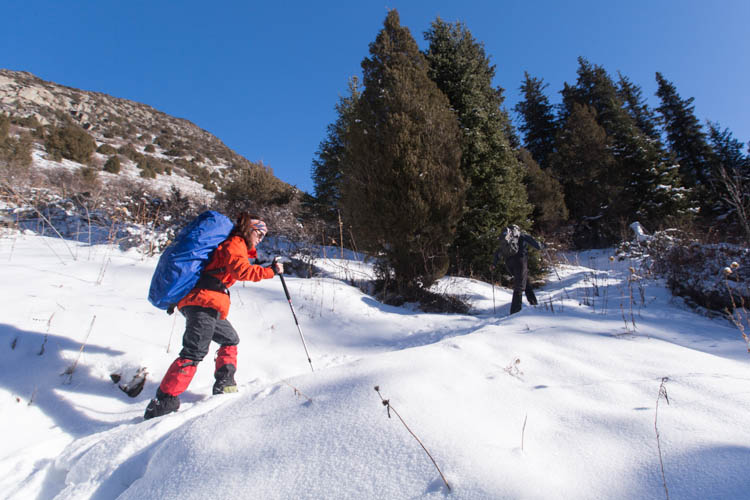 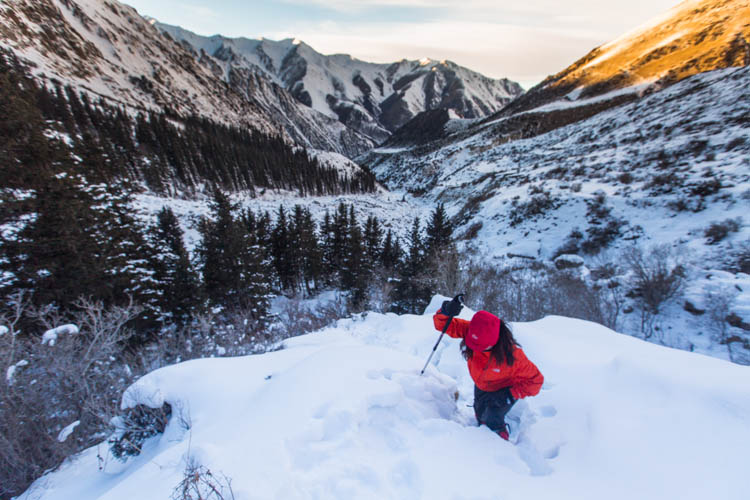 After we were done with our lunch, with some food in our tummies, we were definitely more energised and hyped up for the next part of the trek! After a lot of slipping and fumbling on snow, we finally reached the half way mark, which was the completely FROZEN waterfall! By the way, it took us around 4 gruelling hours to reach the waterfall. Compared to summer, you probably need around 2 hours to reach the same waterfall. But anyway, here’s the really cool completely frozen waterfall! From afar, it actually looked 2 dimensional as it blended in with the rocks so well! Misha shared with us that it’s very popular for avid mountaineers to ice climb on this frozen waterfall! The incline wasn’t that steep and the layer of frozen water was thick enough, hence making it safe to climb on it. Also, even if you do fall, you’ll end up on soft fluffy snow which won’t hurt as bad I guess. 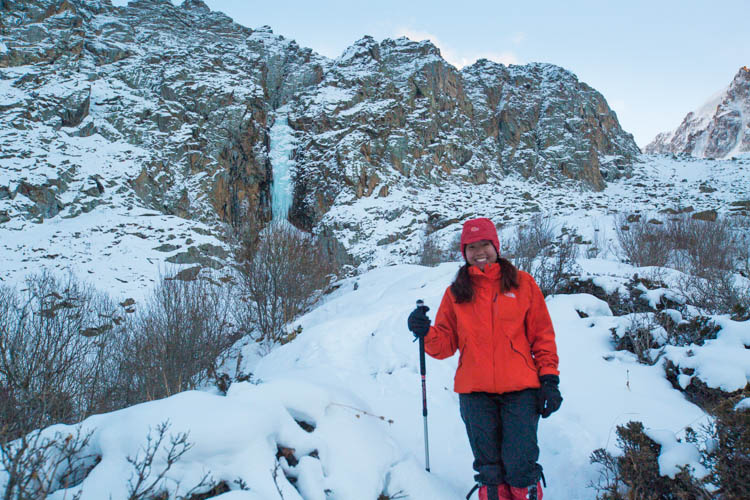 Can you spot the waterfall? 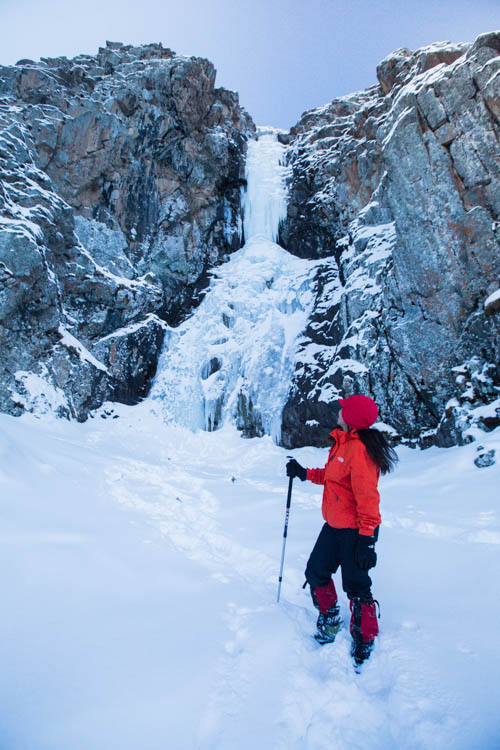 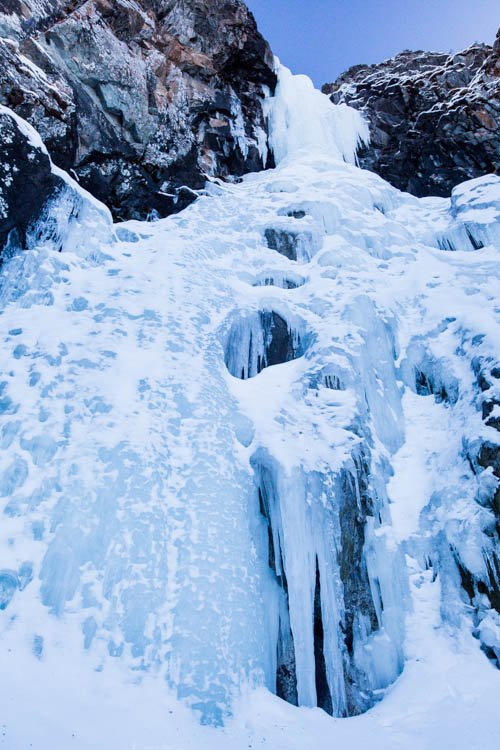 After we were done admiring the frozen waterfall, it was almost 5pm and the sun was setting really soon. That really scared me as we were only halfway through our trek! That was when we had to decide if we wanted to carry on as per our initial plan or to head back to our van and call it a day. We were quite disappointed as we were all prepared for an awesome 2 day trek. But considering that we took 4 hours to reach our halfway mark, we will probably need another 4 hours or actually more since the second half was a lot steeper and twice as challenging! That would mean we’ll only reach our hut at 9pm or later! Maybe in summer it might still be possible, but during winter the days are much shorter and when everything is covered in snow, it’s super challenging to identify the path. With a heavy but slightly relieved heart (we were almost going to collapse from exhaustion), we decided to call it a day and to head back downhill.

We could feel the temperatures dropping drastically and we had to add on more layers. But going downhill on loose snow was faster and super fun! Half the time we were sliding and falling on our butts (didn’t hurt much though), it felt as though we were skiing! Sometimes beneath the snow lies a smooth rock which can be really slippery with a layer of frozen ice on it! At least when going downhill, our muscles are more relaxed as compared to going uphill and hence blood flow to our legs was more regular which kept our feet warm. Eventually the sun has totally set and we were surrounded in darkness. Thankfully we brought our trusty headlight which is a must bring for any trekking trip! Read here for other must bring items for trekking! It took us about only 2 hours to reach the bottom of the mountain which was much faster as compared to the 4 hours taken to trek uphill to reach the waterfall. 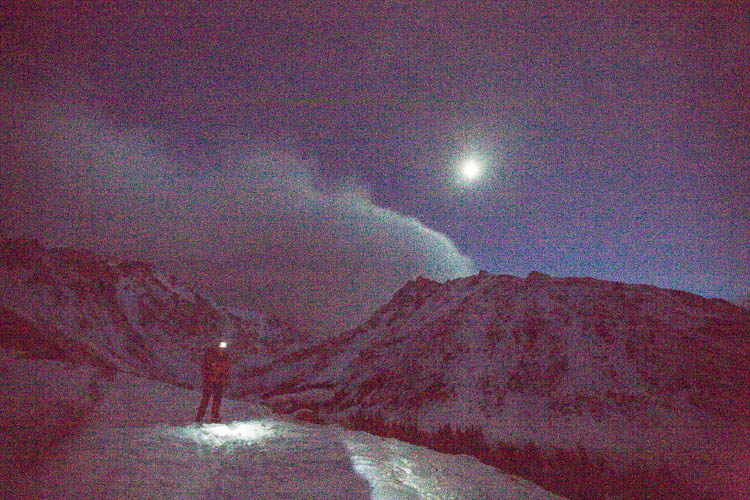 That basically sums up our experience on trekking in Ala-Archa! The frozen waterfall was definitely a unique sight and we were glad we made it 🙂 We’ve learnt so much from this trek and have even come up with a long list of useful tips for trekking in winter. Hope it’ll be useful to you too! 🙂

How to book this tour

We highly recommend Misha (local guide) from Kyrgyzland as he’s really professional and experienced! He’s an avid mountaineer himself and has been offering guided treks in Central Asia for the past 15 years. He also offers a wide array of interesting tours around Kyrgyzstan and the rest of Central Asia (Treks to Inylchek Glacier, Terskey Ala-Too, Juuka, Barskoon, Tosor valleys and more!) He responded really quickly to our emails and we’ve had excellent service from him 🙂

For information on other treks/tours in Central Asia, feel free to contact him directly.

« Winter Wonderland in Kyrgyzstan – Trekking the Kegety Gorge » Part 1: Trekking The World’s Most Dangerous Road to Altyn Arashan and Bumping into Unexpected Visitors

Our first time trekking the Kegety Gorge in -10 degrees! Useful tips on keeping warm while trekking in cold weather...