Not many people know that besides Mt Kinabalu, there are 2 other peaks in Malaysia for trekking too! We didn’t know that ourselves till we went with Amazing Borneo to challenge ourselves to climb Mt Trusmadi, the second highest peak in Malaysia. We were told that albeit its lower altitude of 2,642m as compared to Mt Kinabalu (4,095m), the trail of Mt Trusmadi was much much tougher. Read on to find out why! 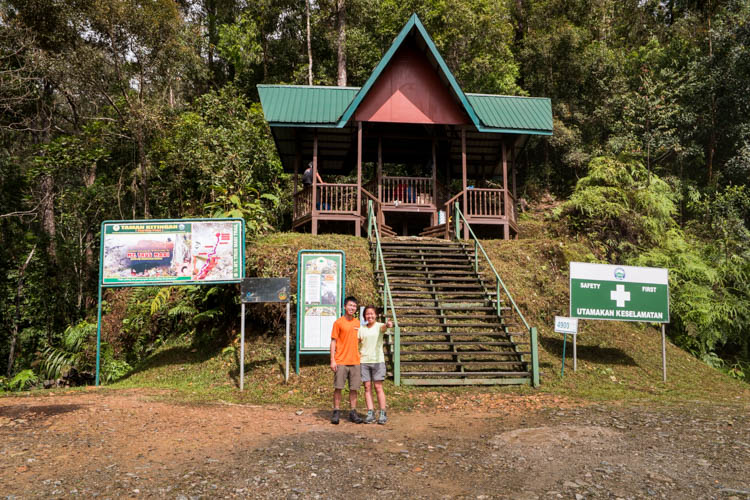 At the start of the trail, feeling very energetic and excited!

The start was relatively easy, a pretty good warm up to the real deal. The first 2km was just a boardwalk trail which was mostly flat with some stairs. We took about an hour to reach the cabin. 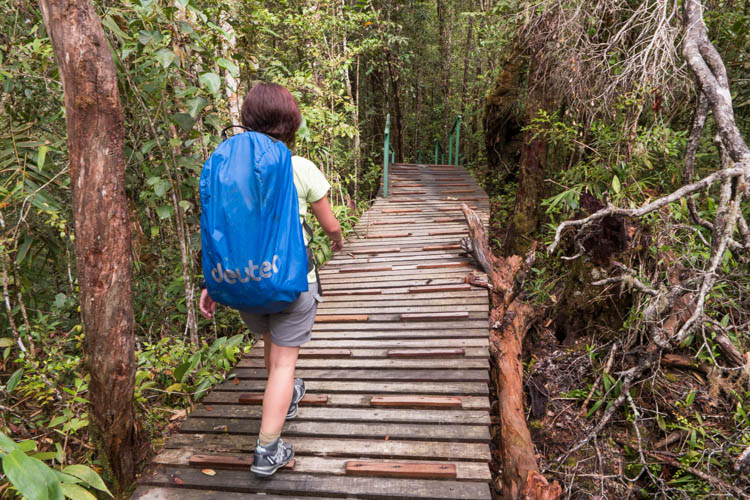 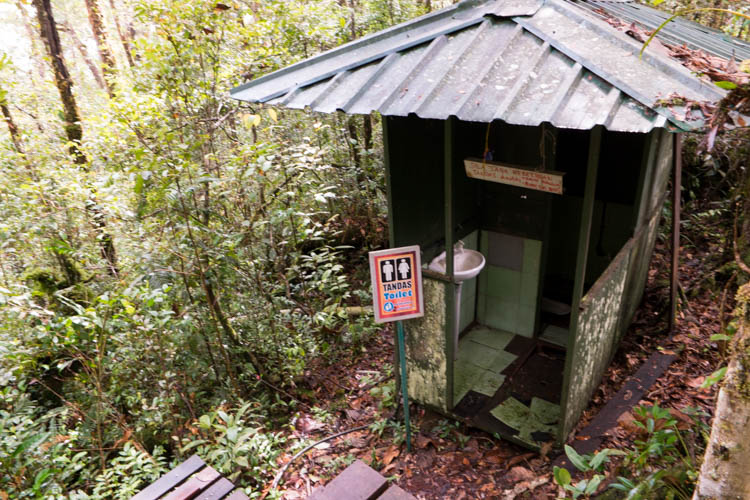 In case you have to answer a nature call while you’re on the boardwalk.

But midway through our boardwalk, it started to drizzle and then began pouring on us! Thankfully we brought our rain jacket but still, we were almost drenched as the jacket only covered our upper torso! Luckily the cabin was nearby and we walked over as quickly as we could.

Tip: A raincoat is definitely a must bring as it’s very precipitous at Mt Trusmadi, similar to Mt Kinabalu.

We reached our cabin shortly after and we were delighted to hear that hot drinks were available for us. What more could we ask for than a cup of hot sweet Milo/coffee in this cold rainy weather! 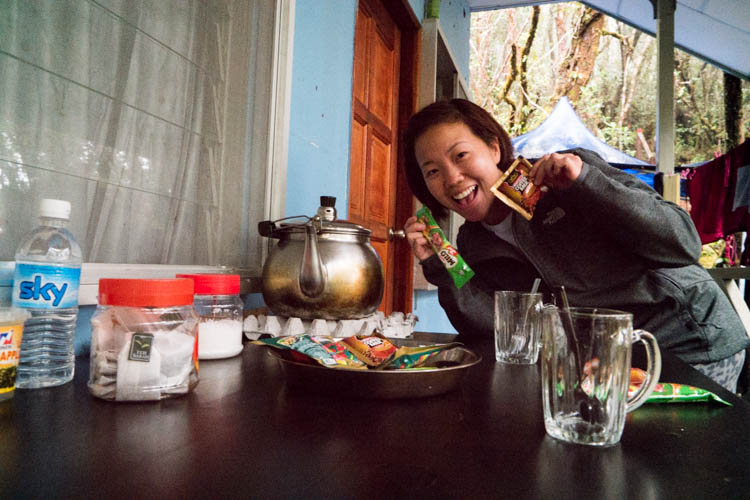 Just look at my happy face! hehe, easily satisfied with a cup of hot drink!

The cabin was very comfortable and equipped with proper toilets too. No hot water though. But because we only did a short 2km boardwalk trek plus the weather was so cold, we decided to skip the shower.

The rooms were dormitory styled with double decked bunk beds. But because there weren’t many people, we had a whole room to ourselves. We did meet another couple (Janet and Andrew) who reached earlier than us. Our sleeping bags were a little damp though and had a rather unpleasant smell. So you might wanna bring your own sleeping bag or a liner if you’re particular about it. But for us, we were too tired that we didn’t even bother about the smell. Anyway theoretically, your nose gets used to smells after 7 seconds. So just tahan for 7 seconds and you’ll be fine 😉 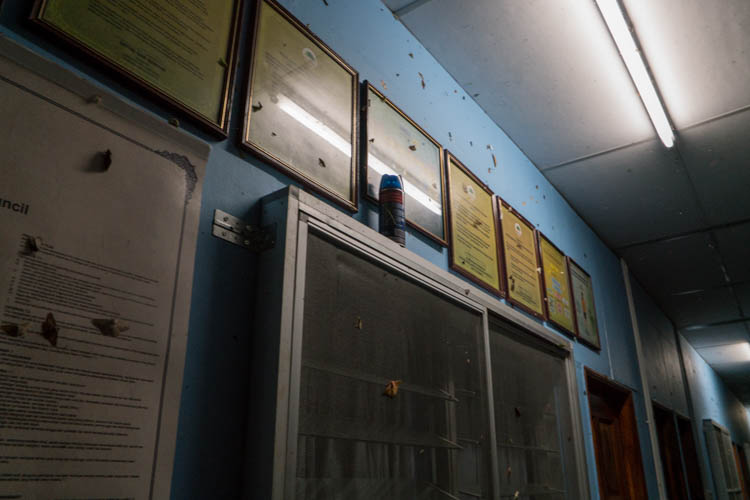 Ever seen an insect as huge as your entire palm? Well, you will over here at Mt Trusmadi.

Tip: Slippers are provided at the cabin. So you can lighten your load by not bringing your own slippers. But we still brought ours as we wanted to change into our slippers the next day after we’re done with the trek. So it’s up to you!

Dinner was provided and we were really impressed with the dishes! There was even bak ku teh (chicken) and it felt so good sipping the hot soup it in such a cold weather! We chatted with our newfound friends for awhile before heading to bed at around 8pm. Yes, 8pm. No choice as we had to wake up later at 1am for our supper/breakfast before heading to the summit. 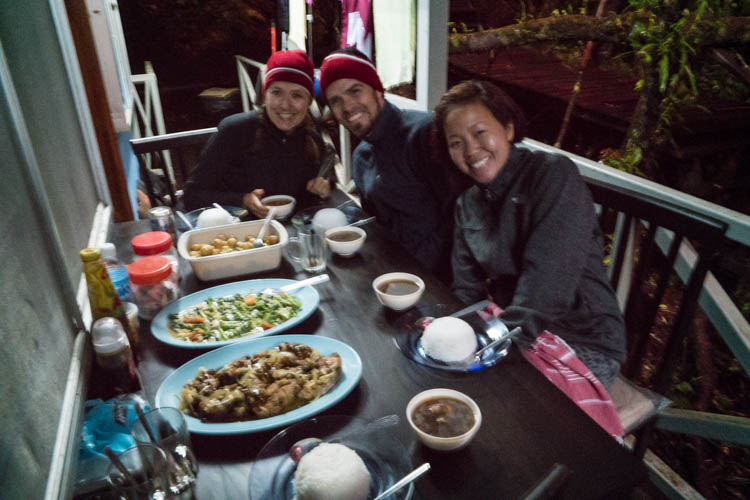 Thankfully we didn’t have any trouble sleeping at 8pm as both of us didn’t have much sleep the night before and it had been a long day for us. Breakfast was again such a pleasant surprise, full fledged with delicious fried noodles, fried bread, sausage, white bread with kaya or jam. We felt like we were eating enough to fight a war! Although figuratively, climbing Mt Trusmadi did feel like a war, a mental war with yourself. 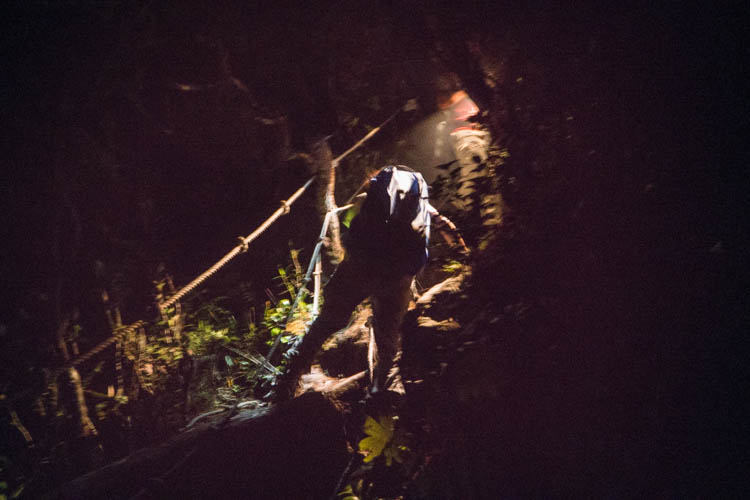 And the challenge begins….climbing in darkness!

Tip: Another must-bring, headlight. The main part of the climb will be done during the night and with such a challenging terrain, you definitely need your headlight!

The first 200m of the summit climb were mainly stairs via the boardwalk, still relatively simple. The real challenge started when we started trekking on the trail without the wooden planks. This by far is one of our most challenging trek till date. It’s not as intensive as Mt Kinabalu, but it’s physically and mentally challenging.

1. You have to climb vertical rock faces in the dark 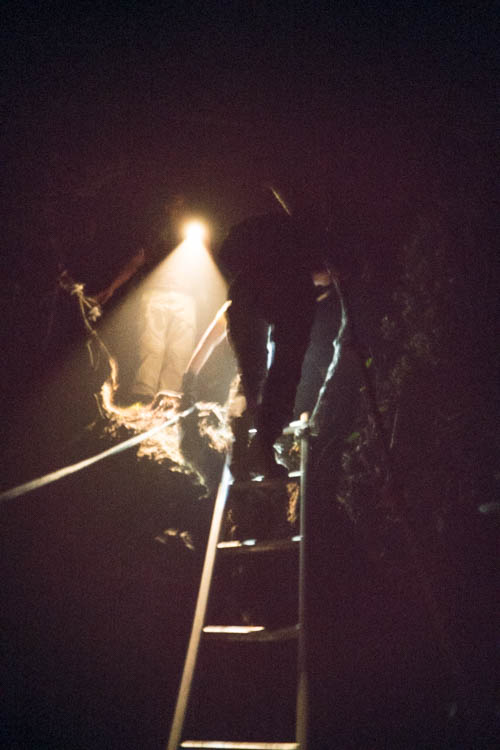 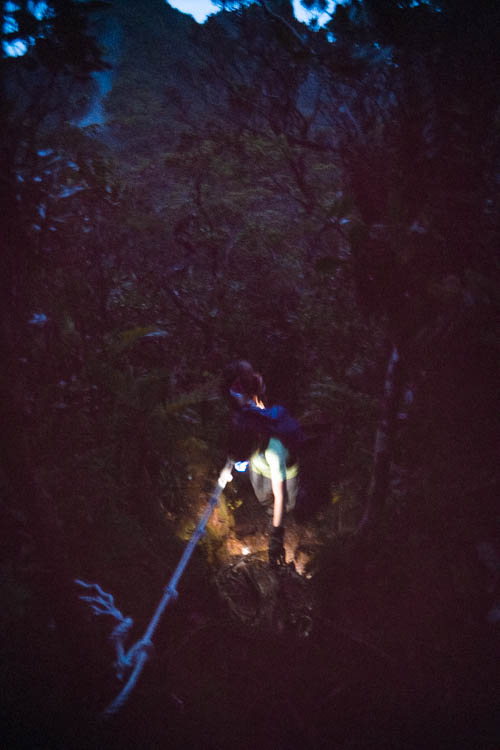 At some parts, the rocks were almost vertical and you will need to grab onto a rope to climb up. It was really fun actually, kinda felt like rock climbing, but only without any harness. Sometimes we had to climb using a ladder instead.

Tip: When climbing down a ladder, it’s always easier to turn around and climb down facing the ladder instead of the other way around.

2. You have to stay strictly on the trail or face a steep drop! 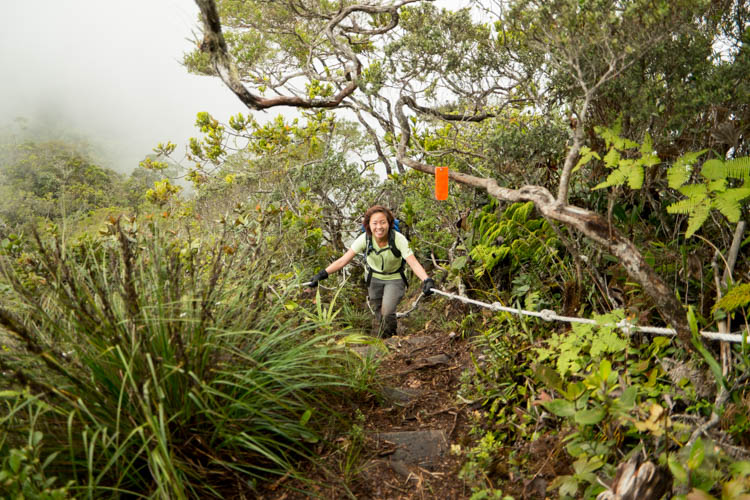 Beyond that rope was a steep plunge into the abyss! So always stay on the trail and you’ll be fine.

We also spotted some signs along the way that read “Steep drop ahead” and there was only a rope that acted as a barrier. So, be very careful when climbing and always stick to the trail and follow your guide! Mt Kinabalu also had steep drops when nearing the summit but for Trusmadi, the trail was really narrower and the steep drop was literally right next to you!

3. Be prepared to get really really dirty especially when it’s raining! 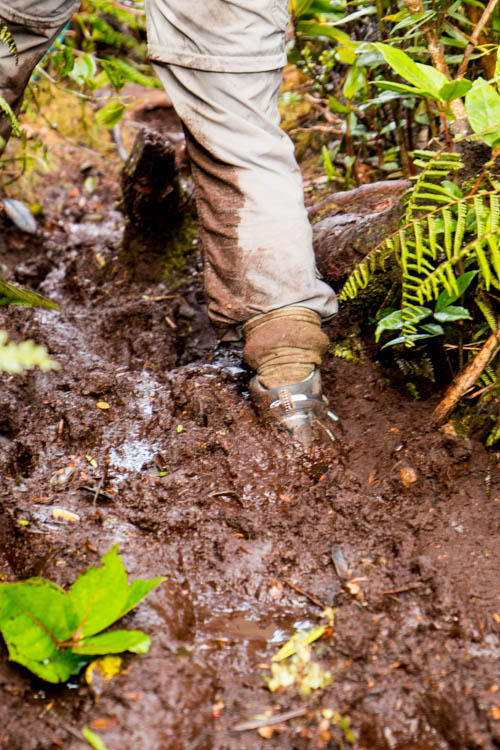 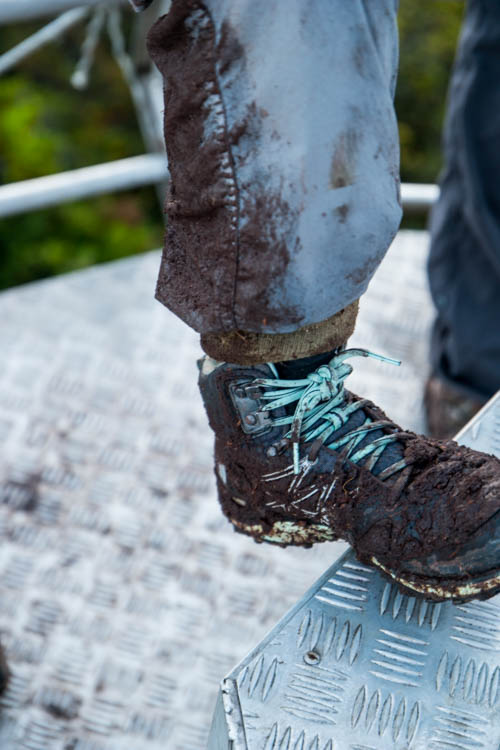 And we wonder, where did Trusmadi get it’s name from. Geddit geddit? haha. Maybe it should be renamed as Trusmuddy. But well, be prepared to get really really dirty! Just look at how muddy my shoes and pants were! This was definitely something that you will not face during the summit climb of Mt Kinabalu which was mostly dry rocky terrain. But for Trusmadi, the last 300m of the summit climb was one of the muddiest trek that we’ve ever done in our lives!

4. Train your thigh muscles with the huge steps that you’ve gotta take 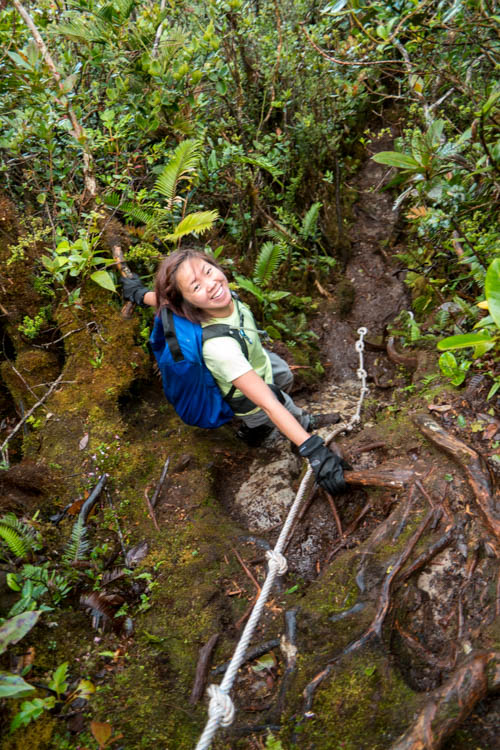 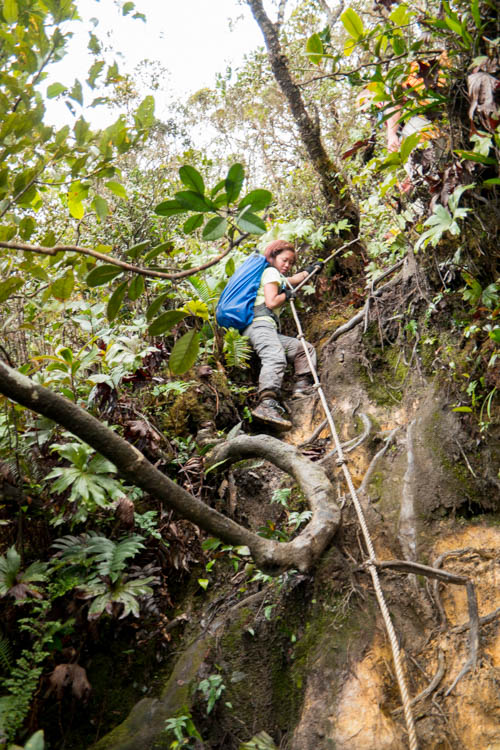 At Mt Kinabalu, it was mostly medium sized steps when climbing up and towards the summit, it was more of a relatively flat upslope terrain. As compared to Trusmadi, the terrain was mostly made up of almost vertical slopes and it can get quite tiring especially for people with shorter legs. Climbing up was tough, but climbing down was even more tiring!

Tip: Bring your gloves, you will definitely need them during the summit climb! When climbing in the dark, we had to rely a lot on grabbing branches, rocks, etc for support and you never know whether they are safe to grab. At least with gloves, you don’t have to worry about that.

5. Beware of booby traps and watch your footing! 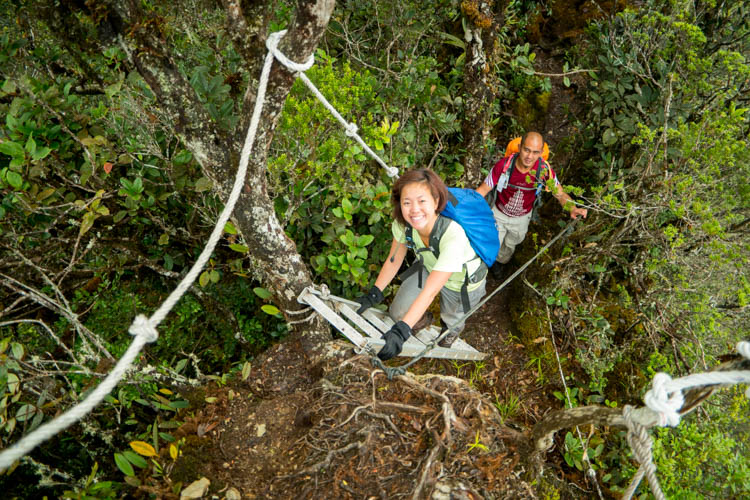 That’s our wonderful guide, Jo, at the back!

Especially as it was at night, it made it so much more challenging! You have to really stay alert and focused at all times! As this trail is still not as commercialised, it is still pretty much left untouched. Low lying brunches, rocks, fallen tree trunks, tree stumps are just some of the obstacles that you have to be careful to not trip over. Imagine doing what i was doing in the photo when it was pitch dark with only a certain radius that was illuminated by our headlight. To make it even more challenging, I forgot to change the batteries of my headlight and it was super dim 🙁

Tip: Don’t forget to check the batteries of your headlight! Mine almost ran out of batteries and the light was super dim during the night climb. Please learn from my lesson!

Finally, we reached the viewing tower of Mt Trusmadi which was still 300m away from the summit. In fact this place was at a slightly higher altitude than the summit itself! The view was beyond breathtaking. We were high above the clouds and the different formations and layering of the clouds made it so picturesque. All of our effort was worth it 🙂 Unfortunately we missed the sunrise just by a few minutes and it was already starting to get bright when we were there. 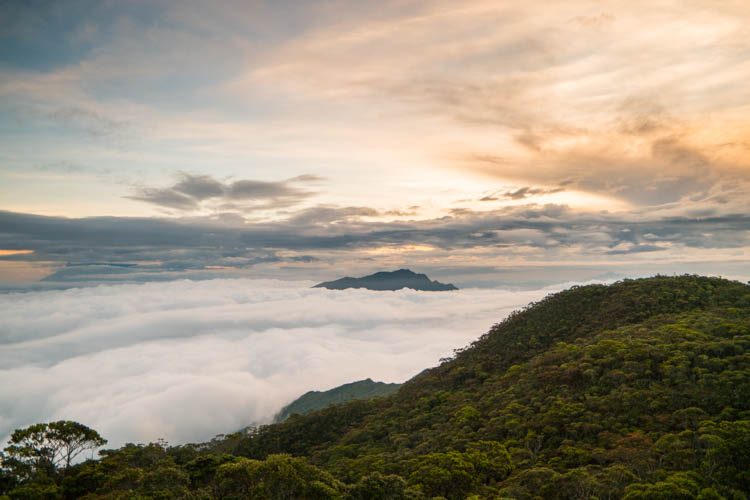 Can you spot Mt Kinabalu amidst the clouds? 🙂

The last 300m to the summit was super duper muddy! But it was also because it was raining the day before. The views were actually nicer at the viewing tower where it was higher than the summit. But apparently the official board of Mt Trusmadi was fixed here first and hence they continued to use this as the summit. 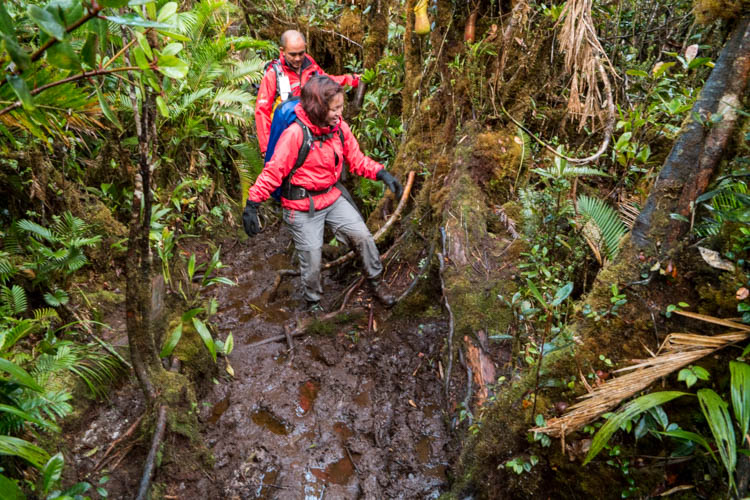 Muddiest 300m to the summit ever! 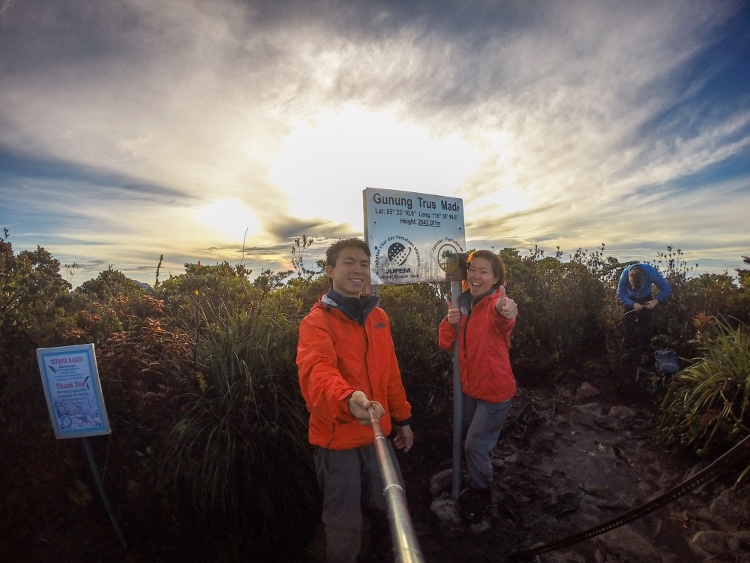 Finally, at the summit of Mt Trusmadi!

Descending Mt Trusmadi was also very tough, especially on our knees. But at least it was bright and we could see every obstacle that was in our way. We took around 3.5 hours to reach the summit, but 4.5 hours to descend to our cabin! First time that we took a longer time descending a mountain than ascending!

Oh and also, we came across so many pitcher plants during the climb! It was the first time in my life seeing a pitcher plant actually. According to our guide Jo, some pitcher plants could grow huge enough to store 5 litres of water! 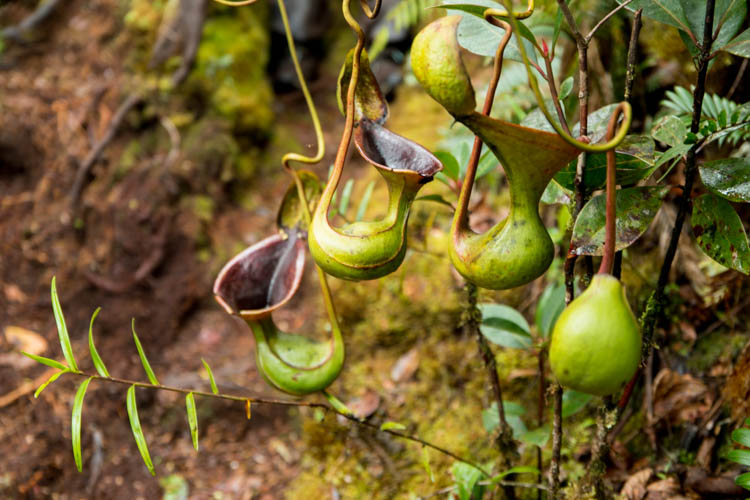 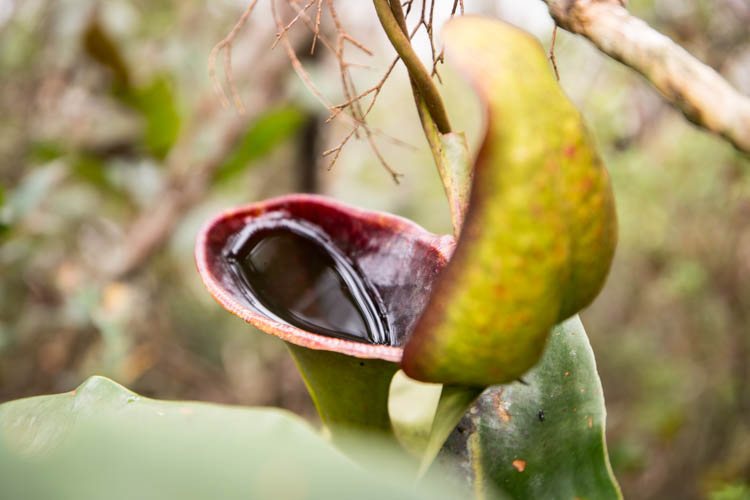 Fun Fact: The pitcher plant contains a sticky liquid that attracts small insects to enter and once they do, they get trapped inside the plant and ends up as food for the plant.

Overall, we really enjoyed ourselves very much climbing Mt Trusmadi. For those that are interested in a quick getaway trek or an alternative to climbing Mt Kinabalu, do give Mt Trusmadi a try! All you need is a weekend to climb Mt Trusmadi! 🙂

How to book this tour
We booked our tour with Amazing Borneo who settled everything for us from the pick up at the airport, to our accommodation, land transfer, to booking of all the necessary permits of Mt Trusmadi. It’s almost impossible to go on your own as you will definitely need a guide and to get to the starting point, you will need about 4 hours of drive! So you’ll still need to rent a car or hire a taxi, which is not cheap either. 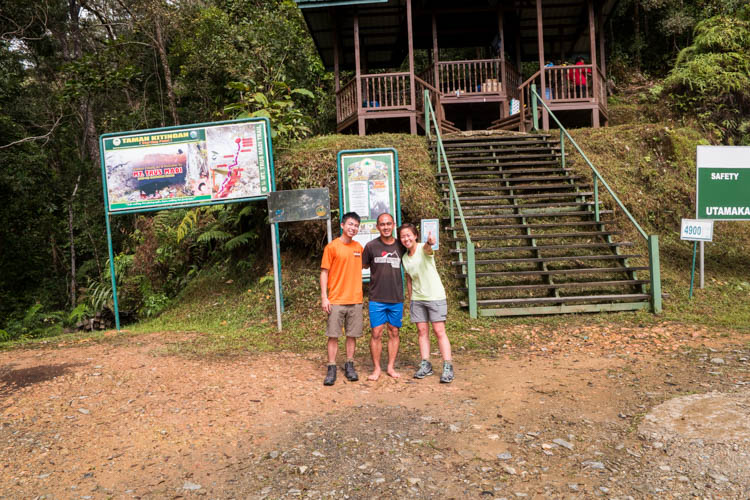 With one of the best mountain guides, Jo, that we’ve ever had.

With one of the best mountain guides, Jo, that we’ve ever had.

This was our second time climbing with Amazing Borneo as we previously we booked our Mt. Kinabalu package with them and we were very pleased with their service. What impressed us most was the passion and dedication that their guides displayed. You could tell that they were there because of their passion and they really loved what they were doing. Our guide, Jo, spoke excellent english and took really good care of us during the climb. 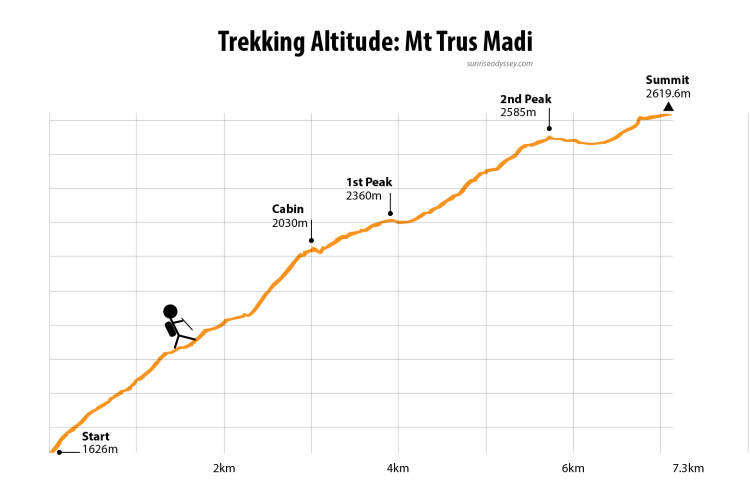 Here are some stats we gathered from our climb!

Thank you Amazing Borneo for hosting us! All photos above were taken with the Samsung NX1.

For those that have climbed both Mt Trusmadi and Mt Kinabalu before, what do you think, which was more challenging for you? Share with us your view by commenting below!

Round up of our Footprints Across Asia Journey

A summary of all the 12 countries that we visited during our 10 months Footprints Across Asia overland journey from...