7 Other Fun Things To Do In Pokhara Besides Trekking

If you’re planning on heading to Pokhara, do set aside some time to explore the rest of this beautiful city!

Most people only know about Pokhara as a starting point for the famous Annapurna Trek. But there are so many more facets of this precious city besides trekking! We were already doing the EBC trek and so we skipped the Annapurna trek in Pokhara. We would recommend spending at least 3 days in Pokhara. So here it goes!

1. Explore old Pokhara on a bike 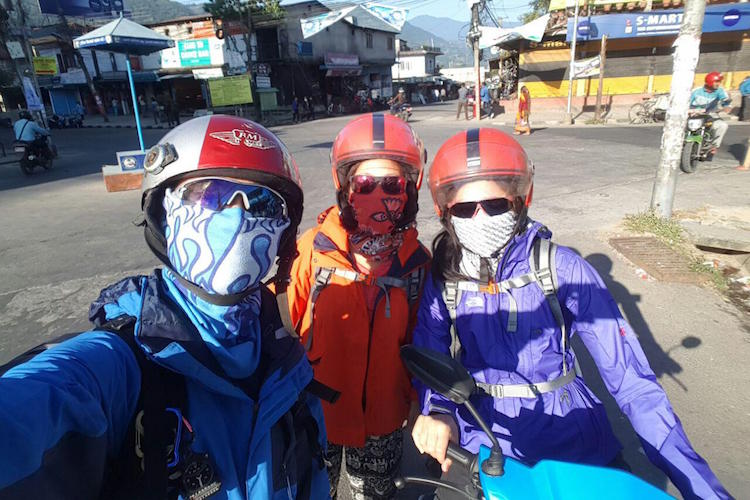 Tip: A head buff/scarf is a must in dusty Pokhara!

One of the best ways to explore this city is to rent a motorbike as it will take you to much further places as compared to riding a bicycle. While you’re on the bike, do take a moment to enjoy the breathtaking view of the Himalayas as the backdrop of this city. You won’t get to see this in Kathmandu!

Cost: 1,200rupees to rent 1 motorbike for the entire day. You do have to haggle a little with them though.

2. Boating in the scenic Phewa Lake 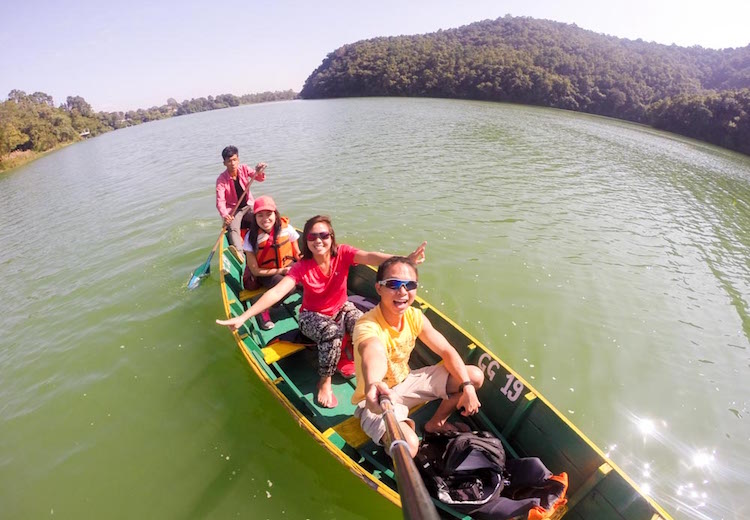 Cost: 600rupees for a 1 way journey with a boatman to the Peace Stupa. It’ll be cheaper if you choose to row the boat on your own.

3. Enjoy the views from the Peace Stupa 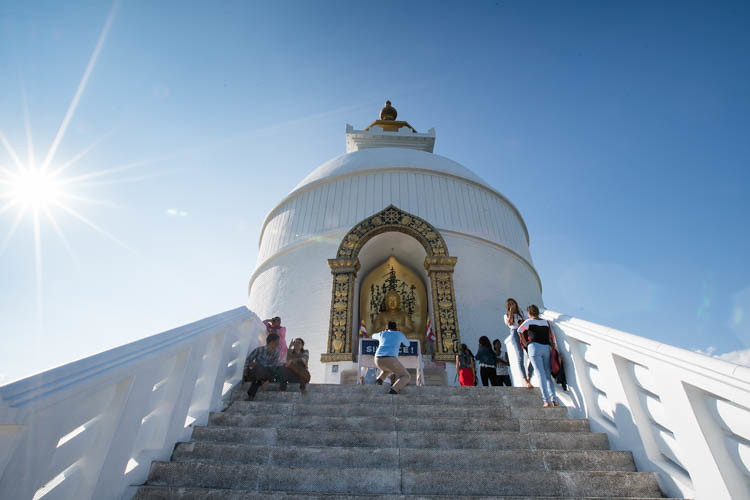 At the Peace Stupa in Pokhara 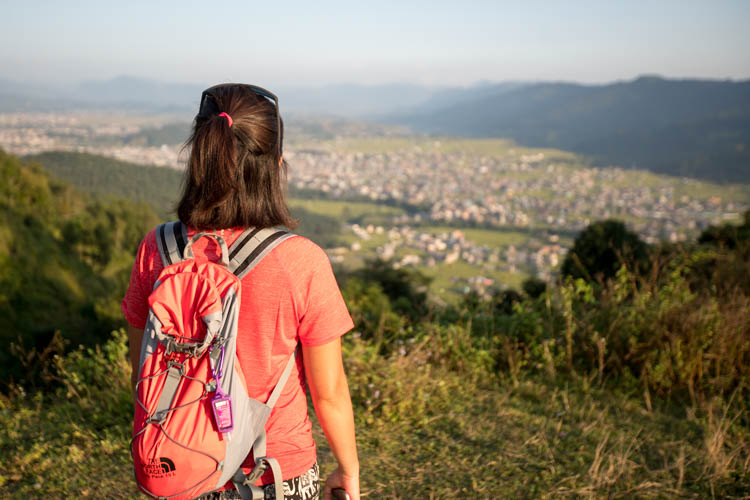 You can either choose to trek the long way (2-3 hours forest trek) to the Peace Stupa or like what we did, we took a boat to the bottom of the Peace Stupa and walked up the stairs that led to the stupa. It wasn’t that near also, took us around 1 hour walk up to the stupa. After we were done, we chose to trek back to the city. Much easier as it was mostly downslope and you get to enjoy the beautiful views along the way.

4. Come up close with bats at the Bat Cave 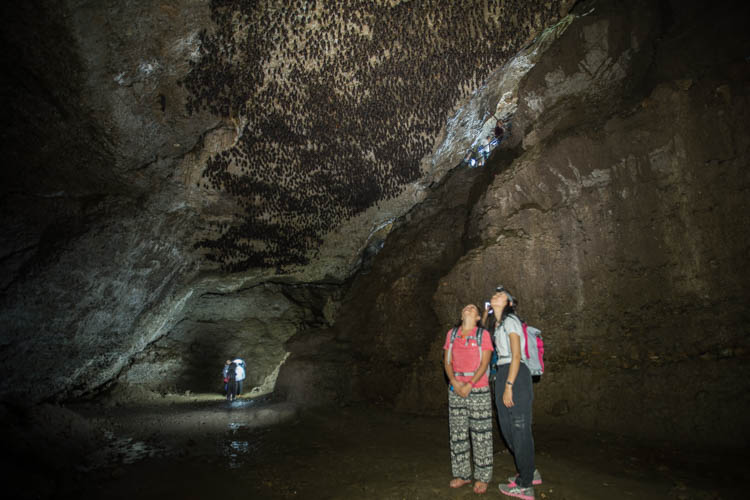 Look up and admire the bats but don’t open your mouth!

We were pleasantly surprised to see this attraction filled with mostly local tourists. We were one of the few foreigners there. This activity turned out to be one of our favourites as it was so untouched and real. Actually, also a little dangerous as there was totally no safety check at all. It was quite a small cave actually, wouldn’t recommend it if you’re claustrophobic.

Tip: Bring along your own headlight if you have. If not, you can also borrow one from the staff but they will provide you with a huge heavy light which might be abit cumbersome while you’re clambering over the rocks inside the cave.

Once you enter the cave, look up and you will be shocked to see a huge black patch of bats, just right above you! They were so near that it got a little scary! Don’t forget to close your mouth as you look up, wouldn’t want to know what guano tastes like :/ 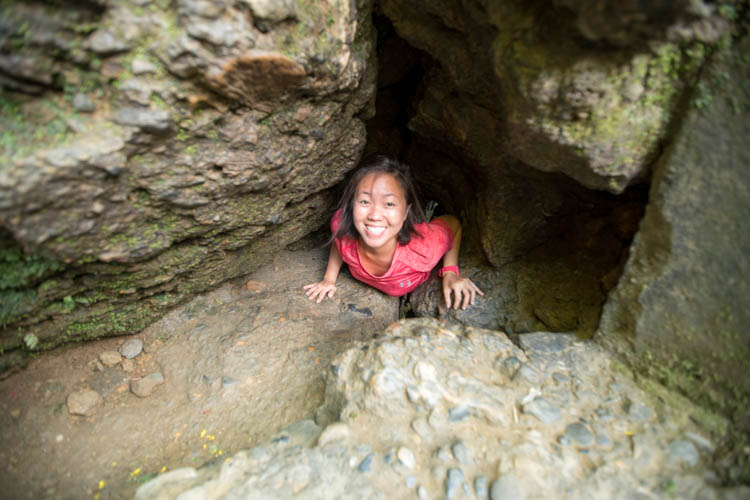 The super narrow exit of the Bat Cave in Pokhara!

The exit of the cave was the most exhilarating and . Firstly, the rocks were quite slippery as it was damp inside the cave. So proper footwear is definitely a must, no slippery slippers! We had to literally use all 4 limbs to climb our way out of the cave!

Cost: 110rupees/pax. To get here, we rode a motorbike here and simply followed our digital map. Not very sure if there are any public transport here. 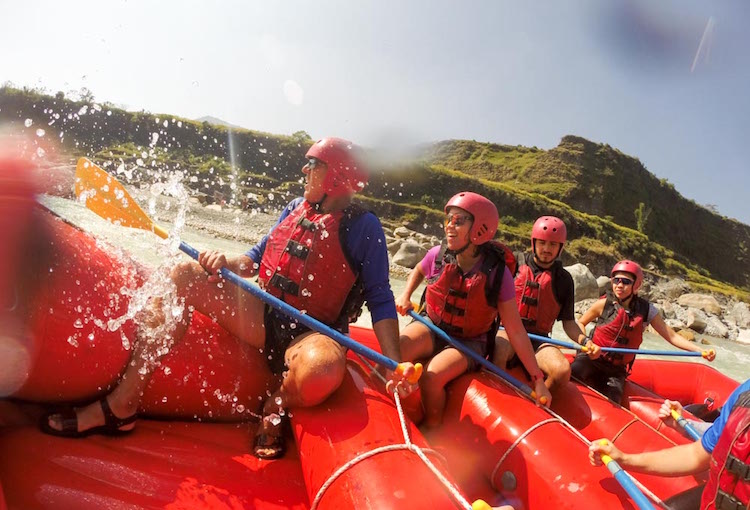 Most exciting white water rafting ever!!

It’s no wonder that Pokhara is given the title as the “Adventure Capital of Nepal“. If only we had more time and budget, we would have tried their paragliding (supposedly one of the best in the world), the ultralight aircraft and many more!

The white water rafting here is definitely one of the most exhilarating experiences we’ve ever experienced! The extreme rapids and near capsized moments were definitely heart stopping! To top that off, the water was icy cold and each time a huge splash hits us, we’ll all  be screaming because of the cold too!

6. Enjoy the sunset at Sarangkot Viewpoint 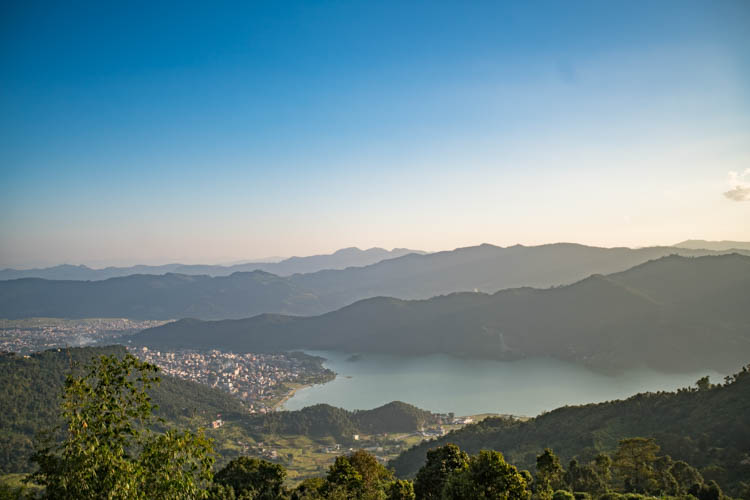 Enjoying the breathtaking views in Pokhara

This viewpoint is probably only accessible if you rent a motorbike. It’s a long way uphill and we wouldn’t recommend walking up or riding a bicycle. The view was absolutely stunning and we just stood there at the edge in awe of mother nature.

7. Escape from the crowd and chill at Bejnas Lake 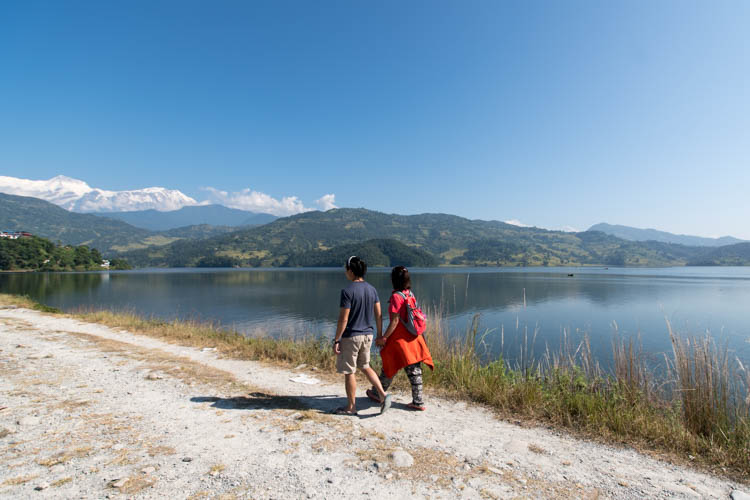 If you have time, do check out this Bejnas Lake in Pokhara!

If you’re already convinced to rent a motorbike, do check out Bejnas Lake which is a smaller lake than Phewa Lake, but a lot more scenic and less touristy.

Tip: For the best view of the lake, head to the Bejnas Information Centre (viewpoint) near Sundarindanda. There’s a 30pesos per pax to enter the centre.

Where we stayed at in Pokhara:

Hotel Angel (along Lakeside) – Check for updated price here and book directly!
Cost: 300rupees per night for a bed in the mixed dormitory
Location was excellent, along the Lakeside where there are plenty of eateries and shops.
Owner was very friendly and helpful too!

How we got to Pokhara from Kathmandu:

We booked a bus ticket from our guesthouse in Kathmandu.
Cost: 800rupees (we got the standard tourist bus)
Duration: Around 7-8 hours (but it really depends on the road conditions)

Have you been to Pokhara before? Any activity that we missed out and should include in the list above? Do share with us in the comments below! 🙂

Our recommended packing list for Everest Base Camp trek and also things that we did not bring but wished we...