Here’s Part 2 of things to do in Georgia, where our travel in Georgia got even more exciting and interesting! We visited the enormous cave city Uplistsikhe, Sapara Monastery, an even larger 13 stories cave city Vardzia, the amazing stalactites and stalagmites formation inside of the Prometheus Cave and witnessed a real dinosaur footprint at the Sataplia National Forest!

Click here if you missed Exploring Georgia Part 1 where we explored Tbilisi, visited the David Gareja Monastery, Ananuri Fortress, Signagi, Bodbe Monastery, enjoyed an evening of traditional Georgian folk dance performance while we had our dinner and more!

This was the first cave city that we’ve ever visited in our lives and it was amazing! Uplistsikhe was one of the oldest urban settlement in Georgia. Can you imagine, this place used to be able to host 20,000 people! Sadly, what’s left is only less than half of the original city as most of it was destroyed during a major earthquake in the 19th century. 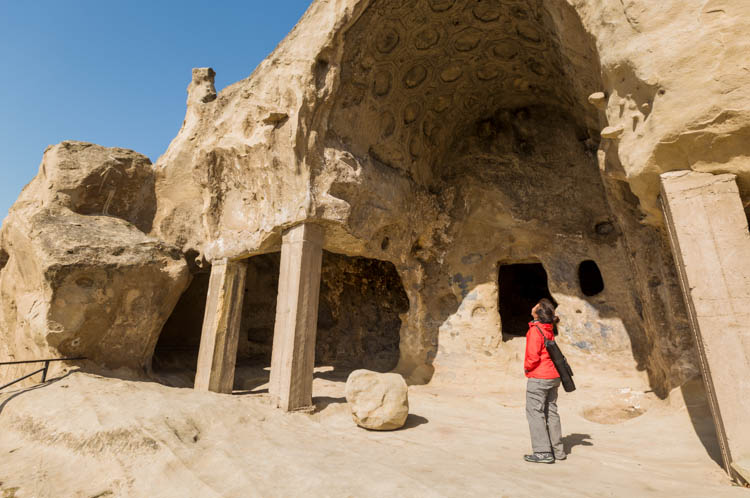 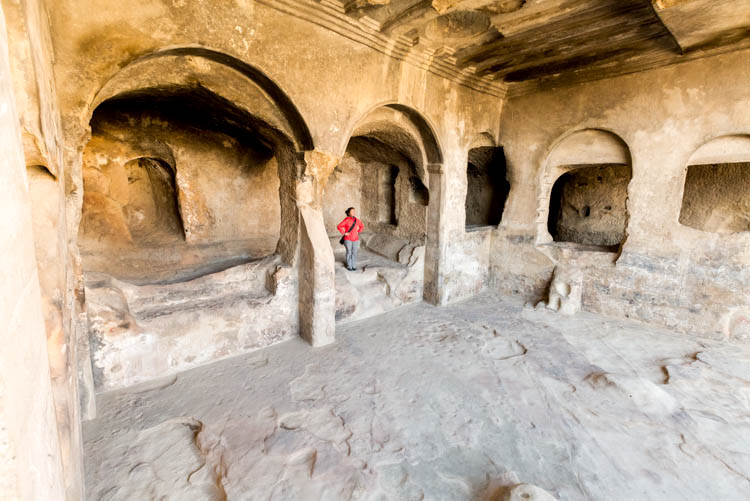 Standing right where the throne of Queen Tamar used to be. Look at the grand arches of her room! 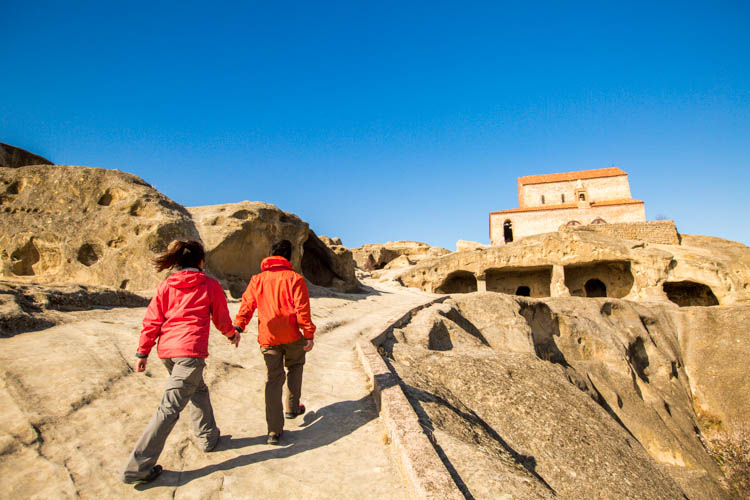 Tip: Don’t miss out on this secret tunnel that takes you right back to the entrance of the cave city! 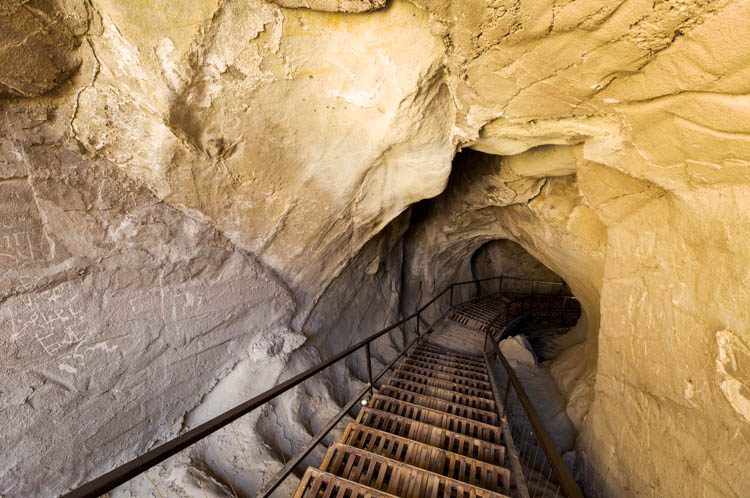 The stairs down to the secret tunnel of Uplistsikhe

Admire the high quality frescoes of the Sapara monastery

This monastery is one of the oldest in Georgia and in it, its intricately detailed and high quality frescoes displays the highest standard of Georgian art. It was a super winding and bumpy uphill ride to the monastery though, just be prepared for it, it’s worth it though! 🙂 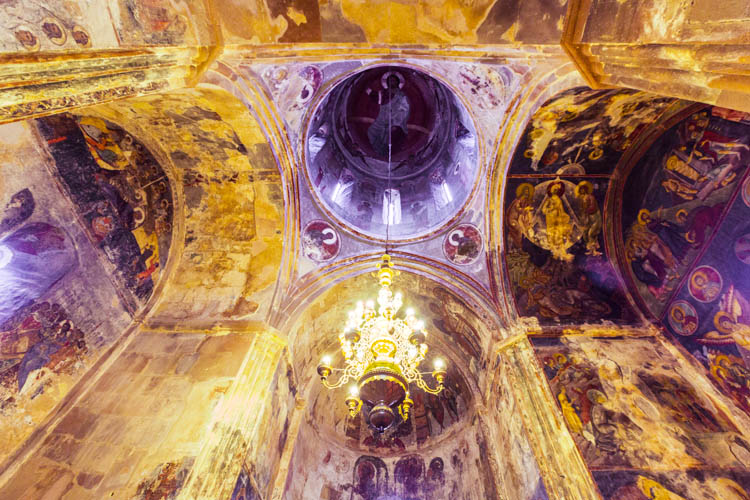 The amazing high quality frescoes inside of the Sapara Monastery 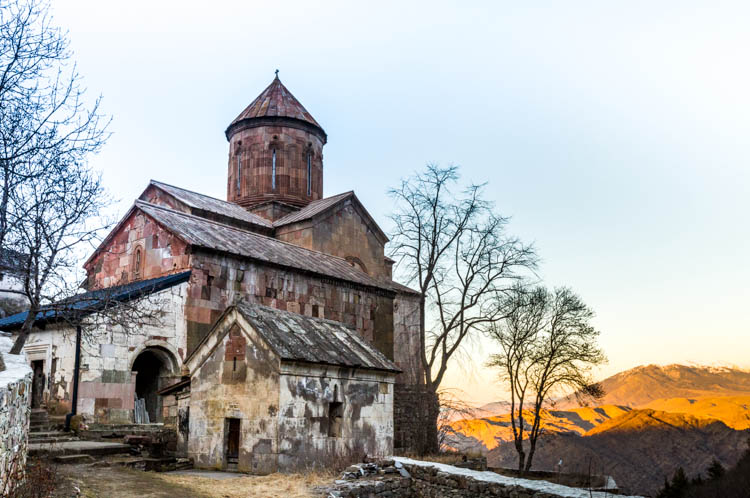 The exterior of the Sapara Monastery, not as impressive as its interior though

Lose yourself in the fascinating 13 storeys carved cave city, Vardzia

Again, a lot of it has been destroyed by the major earthquake. But still, our jaws dropped as we approached closer to the carved city. It was incredibly amazing! This definitely wins hands down for being the main highlight of our travel in Georgia! 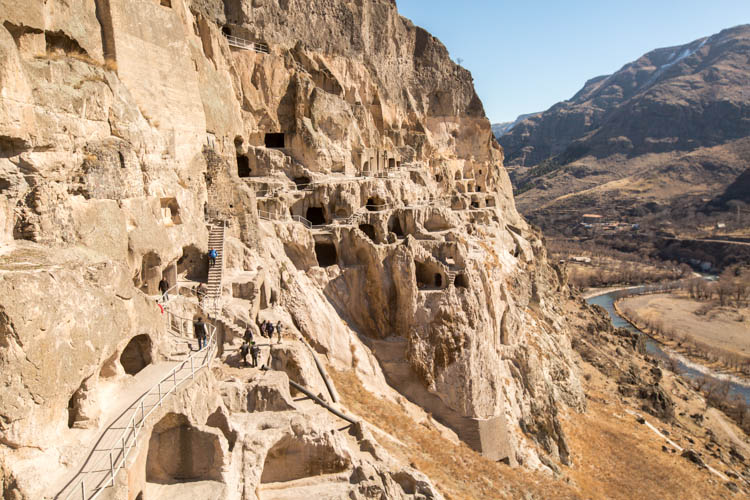 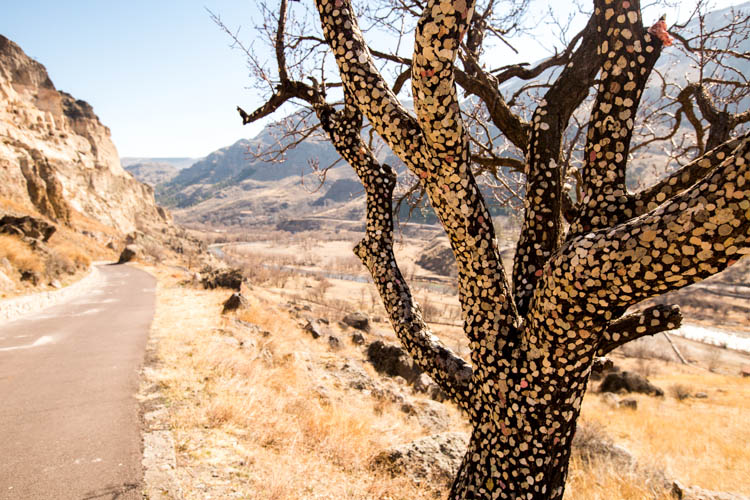 Spotted a “Gum” tree as we walked up to the caves

It was super fun exploring the caves and entering narrow tunnels that lead you out to the other side of the caves. As you can see from the photo, I’m already not so tall and still, I have to bend down slightly to avoid scraping my head against the ceiling! Can’t imagine for the taller folks! We felt like ants crawling through a maze tunnel.

Tip: If you’re claustrophobic, it’s best to avoid the tunnels as it’s quite a long way out and if there’s a crowd, it’s gonna be hard to reverse back to where you entered from. 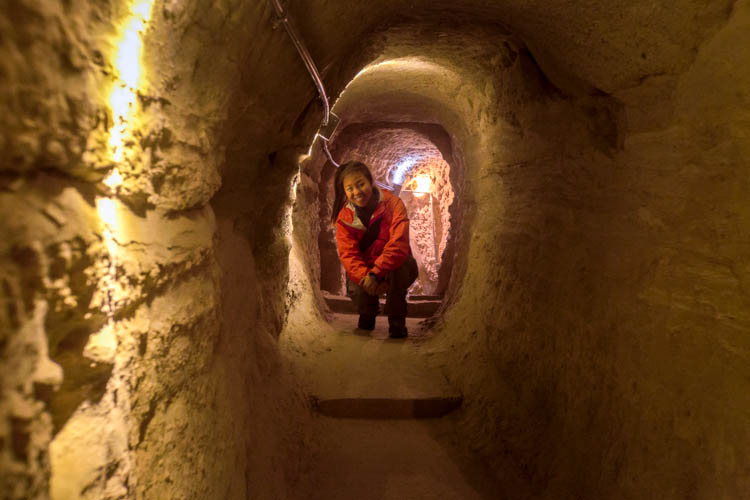 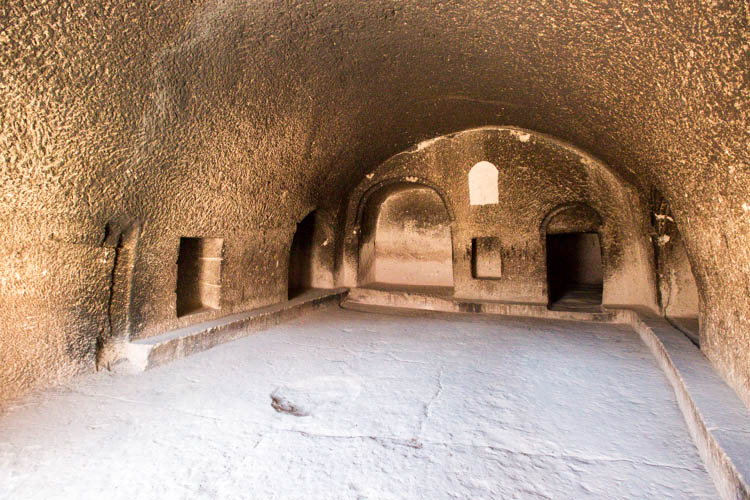 Here’s how a cave looked like. This was the room of Queen Tamar.

Immersing ourselves in the second largest city of Georgia – Kutaisi

If you’re planning on coming to Kutaisi, do stay at least for 1 night here and take your time to explore the different interesting sights of Kutaisi.

Where we stayed at in Kutaisu – Hotel Gora. The rooms were super beautifully decorated and we felt like a king/queen! There’s also fast wifi connection in the room. Both dinner and breakfast were included in the price too. And the dinner was delicious! Location was great too, near Bagreti Church. Highly recommended! 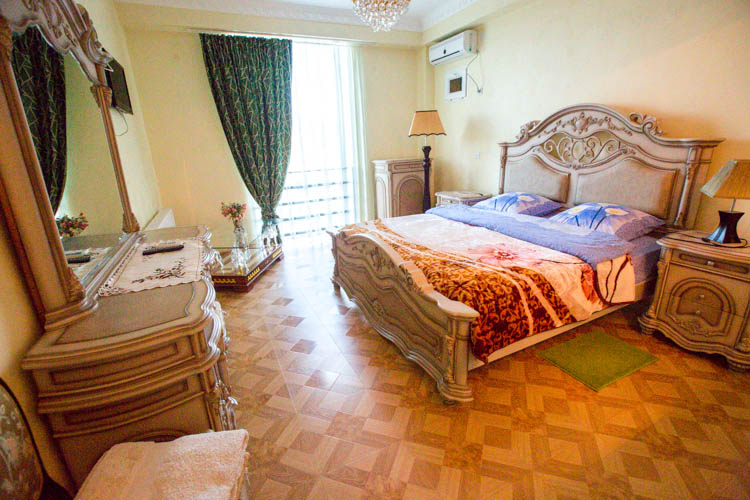 We like how this church stands out because of its distinct turquoise tiled roofs which you will be able to spot easily from afar. Also, this church is huge! Most people come to Kutaisi city to visit this church. This church is also walking distance from Hotel Gora. 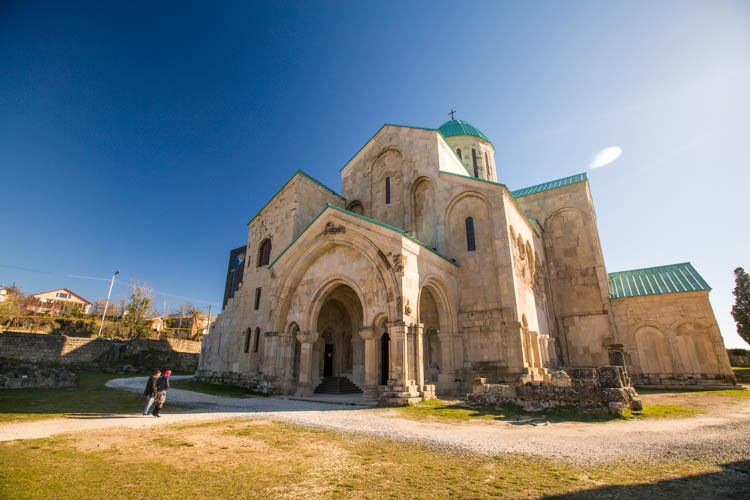 Unfortunately when we visited Gelati Church, there was some restoration work going on, as you can see from the photo below. Its interior was definitely more impressive than its exterior though. 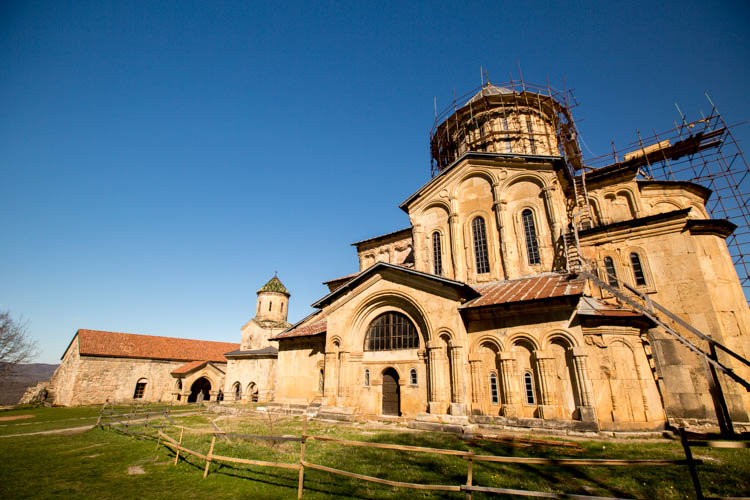 Check out the crazily beautiful frescoes inside of the Gelati Church! All walls inside of the church were covered with colourful intricately detailed paintings and it was an incredible experience admiring all of the beautiful artworks! 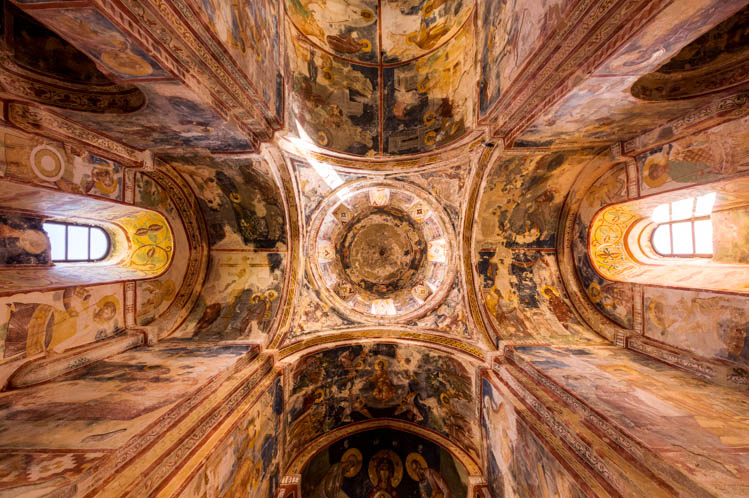 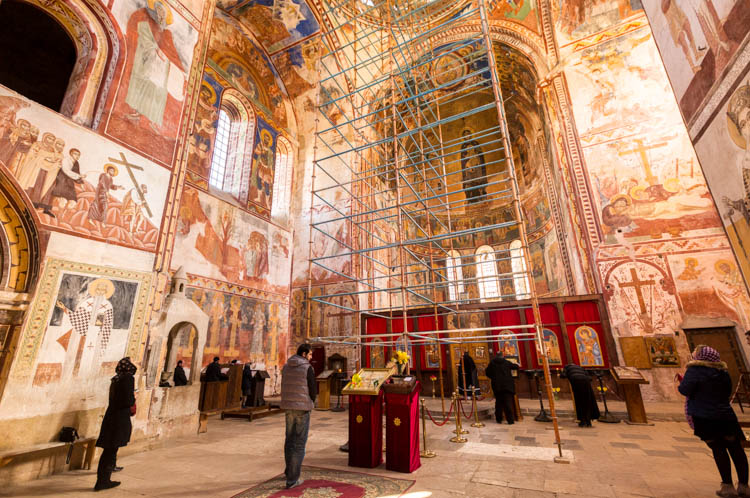 So yes, we spotted a real preserved dinosaur footprint right here in the Sataplia National Forest! How cool is that!? 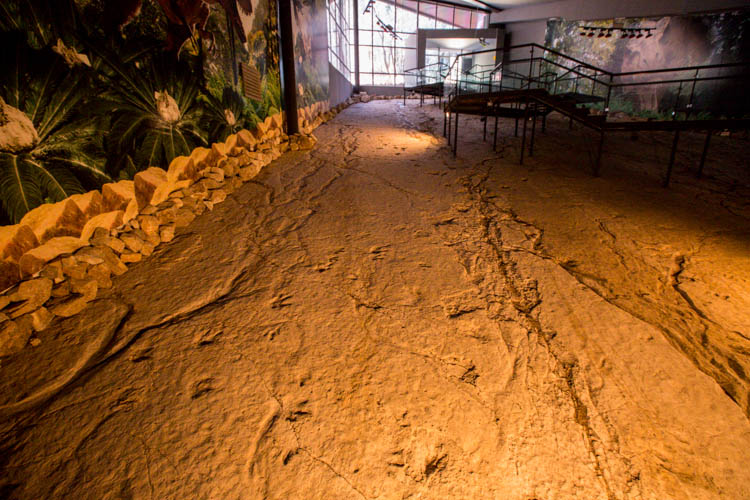 Fun to know: Sataplia also means “place of honey” and the reason why they named this place Sataplia was because the largest population of bees can be found here! There’s a lot of honey stored in the rock crevices and the locals eat honey as food. I hate bees though, thankfully we didn’t encounter any during our trip there! 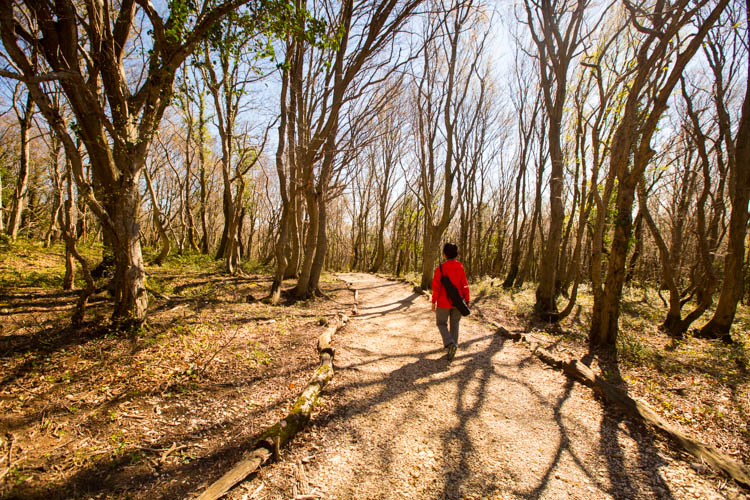 We can imagine this place to be even more beautiful during summer when it’s all lush and green!

Another highlight of the Sataplia National Reserve is the Sataplia Cave which spans over 900m and contains some really beautifully lit stalagmites and stalactites. But when being compared to the much larger and impressive Prometheus Cave, the Sataplia Cave paled in comparison in our opinion. 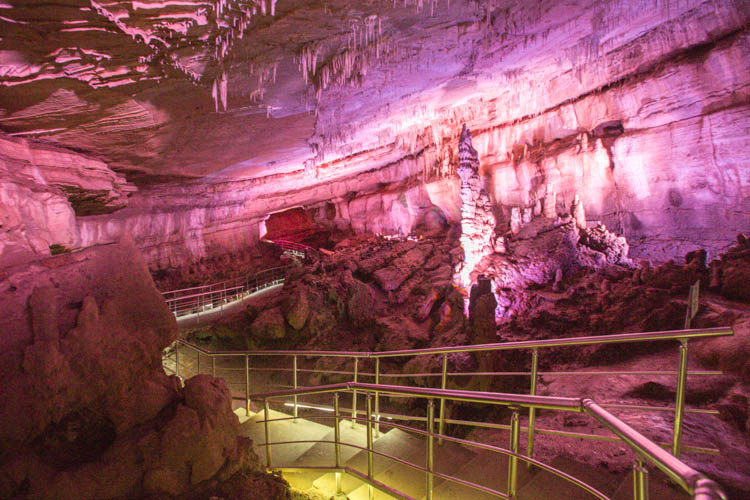 This was definitely one of the most impressive and humongous caves that we’ve ever visited! The natural formations of the stalagmites and stalacmites were stunning! We also like the way they played with the lighting colours, it really illuminated the caves well and enhanced its overall natural beauty! 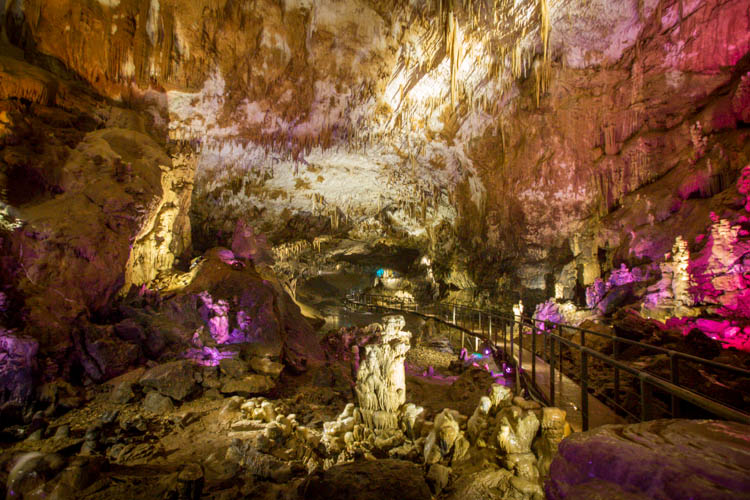 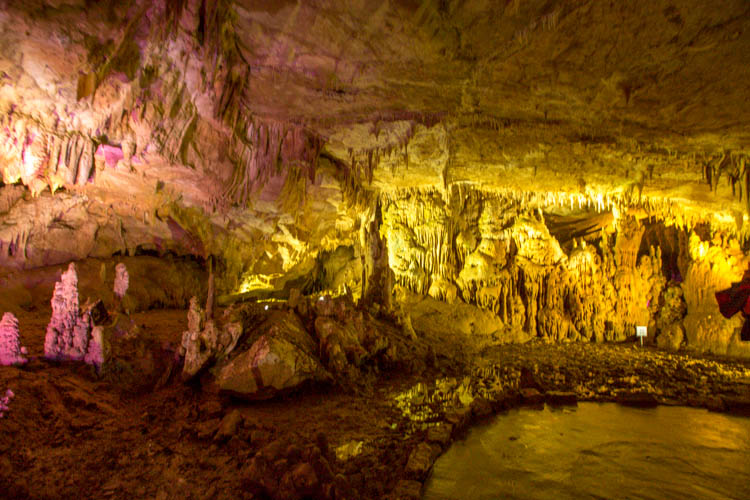 There was also supposed to be a boat ride available inside of the cave itself which we think was quite interesting actually. But unfortunately it was under renovation when we were there and will only open in April/May 2015. 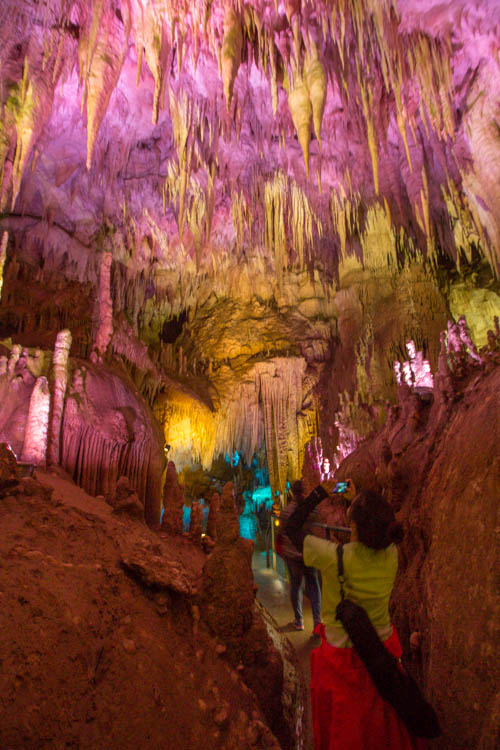 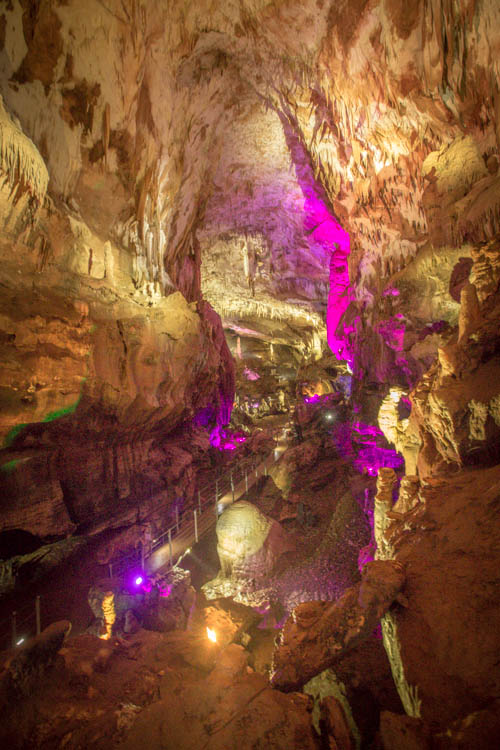 Our last destination in Georgia was actually Batumi before heading to the Sarpi border where we will be entering Turkey from. Sad to say, we were during the wrong season and it was all too cold, cloudy, rainy and foggy at Batumi 🙁 We heard that in summer, Batumi’s very beautiful and thriving with throngs of tourists!

Crossing the Sarpi border into Turkey was definitely an easy and fast process! It took us less than 15 minutes to exit Georgia and enter Turkey! So for now, it’s goodbye Georgia, and hello TURKEY! 😀

We visited most of the places above together with Exotour, a reputable tour agency in Georgia. Overall, we had a fabulous time and we would recommend Exotour to any traveller who’s looking for a trustworthy tour agency in Georgia. Do note that public transport to most of the attractions listed above is very limited and it’s really a lot more convenient and fuss free to join a tour instead. But do be prepared to be stuck in the car for long hours though. We had an average of 4-5 hours drive almost everyday! But thankfully, the car was a comfortable 4WD which made our long rides so much more tolerable and enjoyable 🙂 Not forgetting the amazing scenery as we drove along!

Hope you enjoyed our post about our suggestions on things to do in Georgia!

Many thanks to Exotour for hosting us in Georgia!

« Travel Off Road in Uzbekistan – Asraf Village, Aral Sea & Ancient Khiva » 12 Interesting Facts About Armenia That You Might Not Know

Here are our suggestions on travelling off the beaten road in Uzbekistan to the beautiful Asraf village, the fast disappearing...